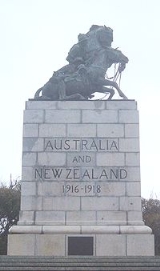 Encyclopedia
The Desert Mounted Corps was a World War I
World War I
World War I , which was predominantly called the World War or the Great War from its occurrence until 1939, and the First World War or World War I thereafter, was a major war centred in Europe that began on 28 July 1914 and lasted until 11 November 1918...
Allied
Allies of World War I
The Entente Powers were the countries at war with the Central Powers during World War I. The members of the Triple Entente were the United Kingdom, France, and the Russian Empire; Italy entered the war on their side in 1915...
army corps
Corps
A corps is either a large formation, or an administrative grouping of troops within an armed force with a common function such as Artillery or Signals representing an arm of service...
that operated in the Middle East
Middle East
The Middle East is a region that encompasses Western Asia and Northern Africa. It is often used as a synonym for Near East, in opposition to Far East...
(Sinai
Sinai Peninsula
The Sinai Peninsula or Sinai is a triangular peninsula in Egypt about in area. It is situated between the Mediterranean Sea to the north, and the Red Sea to the south, and is the only part of Egyptian territory located in Asia as opposed to Africa, effectively serving as a land bridge between two...
and Palestine
Palestine
Palestine is a conventional name, among others, used to describe the geographic region between the Mediterranean Sea and the Jordan River, and various adjoining lands....
) during 1917 and 1918.
Originally formed on 15 March 1916 as the Australian and New Zealand Mounted Division under the command of Major General Harry Chauvel (referred to as Anzac Mounted Division
Anzac Mounted Division
The ANZAC Mounted Division was a mounted infantry and mounted rifles division formed in March 1916 in Egypt during World War I following the Battle of Gallipoli when the Australian and New Zealand regiments returned from fighting dismounted as infantry...
because it was made up of Australian and New Zealand troops who had served in the Australian and New Zealand Army Corps at Gallipoli), this mounted division became part of Desert Column in December 1916 with the addition of 42nd and 52nd Infantry Divisions, under the command of Lieutenant General Sir Philip W. Chetwode.

Expanded to a full corps, Desert Mounted Corps was commanded by Australia
Australia
Australia , officially the Commonwealth of Australia, is a country in the Southern Hemisphere comprising the mainland of the Australian continent, the island of Tasmania, and numerous smaller islands in the Indian and Pacific Oceans. It is the world's sixth-largest country by total area...
n Lieutenant–General Henry Chauvel
Henry George Chauvel
General Sir Harry Chauvel GCMG, KCB was a senior officer of the Australian Imperial Force who fought at Gallipoli and in the Middle Eastern theatre during the First World War. He was the first Australian to attain the rank of lieutenant general and later general, and the first to lead a corps...
, in August 1917 following the reorganisation of the Allied forces by General Allenby
Edmund Allenby, 1st Viscount Allenby
Field Marshal Edmund Henry Hynman Allenby, 1st Viscount Allenby GCB, GCMG, GCVO was a British soldier and administrator most famous for his role during the First World War, in which he led the Egyptian Expeditionary Force in the conquest of Palestine and Syria in 1917 and 1918.Allenby, nicknamed...
after the failure of the Second Battle of Gaza
Second Battle of Gaza
The Second Battle of Gaza, fought in southern Palestine during the First World War, was another attempt mounted by British Empire forces to break Ottoman defences along the Gaza-Beersheba line...
. The Desert Mounted Corps contained numerous Australian British
United Kingdom
The United Kingdom of Great Britain and Northern IrelandIn the United Kingdom and Dependencies, other languages have been officially recognised as legitimate autochthonous languages under the European Charter for Regional or Minority Languages...
French
France
The French Republic , The French Republic , The French Republic , (commonly known as France , is a unitary semi-presidential republic in Western Europe with several overseas territories and islands located on other continents and in the Indian, Pacific, and Atlantic oceans. Metropolitan France...
, India
India
India , officially the Republic of India , is a country in South Asia. It is the seventh-largest country by geographical area, the second-most populous country with over 1.2 billion people, and the most populous democracy in the world...
n and New Zealand
New Zealand
New Zealand is an island country in the south-western Pacific Ocean comprising two main landmasses and numerous smaller islands. The country is situated some east of Australia across the Tasman Sea, and roughly south of the Pacific island nations of New Caledonia, Fiji, and Tonga...
cavalry, light horse and mounted rifle brigades. 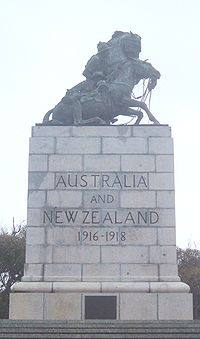 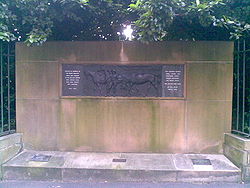 In mid-1918, the Corps was reorganised again. Two Indian cavalry divisions were transferred from the Western Front
Western Front (World War I)
Following the outbreak of World War I in 1914, the German Army opened the Western Front by first invading Luxembourg and Belgium, then gaining military control of important industrial regions in France. The tide of the advance was dramatically turned with the Battle of the Marne...
in France, and reorganised to incorporate some of the Yeomanry Mounted Division. The Anzac Mounted Division became part of Chaytor's Force in September, 1918. The Camel Corps was reduced to a battalion and many of its personnel transferred to the Australian Mounted Division to form the 5th Light Horse Brigade. Still commanded by Chauvel, the corps now consisted of:
File:Desert Mounted Corps Horse Memorial
There were also seven batteries of the Royal Horse Artillery
Royal Horse Artillery
The regiments of the Royal Horse Artillery , dating from 1793, are part of the Royal Regiment of Artillery of the British Army...
, an Armoured Car detachment and the 7th Light Car Patrol.