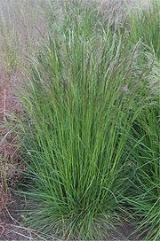 Encyclopedia
Deschampsia is a genus
Genus
In biology, a genus is a low-level taxonomic rank used in the biological classification of living and fossil organisms, which is an example of definition by genus and differentia...
of grass
Grass
Grasses, or more technically graminoids, are monocotyledonous, usually herbaceous plants with narrow leaves growing from the base. They include the "true grasses", of the Poaceae family, as well as the sedges and the rushes . The true grasses include cereals, bamboo and the grasses of lawns ...
es in the family
Family (biology)
In biological classification, family is* a taxonomic rank. Other well-known ranks are life, domain, kingdom, phylum, class, order, genus, and species, with family fitting between order and genus. As for the other well-known ranks, there is the option of an immediately lower rank, indicated by the...
Poaceae
Poaceae
The Poaceae is a large and nearly ubiquitous family of flowering plants. Members of this family are commonly called grasses, although the term "grass" is also applied to plants that are not in the Poaceae lineage, including the rushes and sedges...
, commonly known as hair grass or tussock grass. There are 30 to 40 species.

Deschampsia sometimes grow in boggy acidic formations, an example of which is the Portlethen Moss
Portlethen Moss
The Portlethen Moss is an acidic bog nature reserve located to the west of the town of Portlethen, Aberdeenshire in Scotland. Like other mosses, this wetland area supports a variety of plant and animal species, even though it has been subject to certain development and agricultural degradation...
, Scotland
Scotland
Scotland is a country that is part of the United Kingdom. Occupying the northern third of the island of Great Britain, it shares a border with England to the south and is bounded by the North Sea to the east, the Atlantic Ocean to the north and west, and the North Channel and Irish Sea to the...
.
D. antarctica
Deschampsia antarctica
Deschampsia antarctica is one of two flowering plants native to Antarctica, the other being Colobanthus quitensis ....
is the world's most southern
The world's most southern
- Cities and settlements :- Shops and service facilities :-Geography:-Animals:-Plants:-Gardens, zoos and aquaria:- Religion :- Science :- Transportation :- Other :-See also:*List of northernmost items*Extreme points of Earth...
monocot, and one of only two flowering plants of Antarctica.