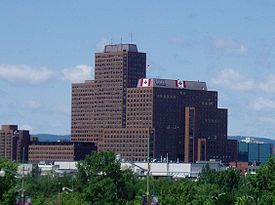 The Department of Canadian Heritage, or simply Canadian Heritage ' onMouseout='HidePop("72857")' href="/topics/Ministry_(government_department)">department
Ministry (government department)
A ministry is a specialised organisation responsible for a sector of government public administration, sometimes led by a minister or a senior public servant, that can have responsibility for one or more departments, agencies, bureaus, commissions or other smaller executive, advisory, managerial or...
of the Government of Canada
Cabinet of Canada
The Cabinet of Canada is a body of ministers of the Crown that, along with the Canadian monarch, and within the tenets of the Westminster system, forms the government of Canada...
with responsibility for policies and programs regarding the arts, culture
Culture of Canada
Canadian culture is a term that explains the artistic, musical, literary, culinary, political and social elements that are representative of Canada and Canadians, not only to its own population, but people all over the world. Canada's culture has historically been influenced by European culture and...
, media
Media in Canada
Canada has a well-developed media sector, but its cultural output — particularly in English films, television shows, and magazines — is often overshadowed by imports from the United States. Television, magazines, and newspapers are primarily for-profit corporations based on advertising,...
, communications networks
Communications in Canada
-Telephone:Telephones – main lines in use: 18.251 million Telephones – mobile cellular: 23.081 million Telephone system:* general assessment: excellent service provided by modern technology...
, official languages (including La Francophonie
La Francophonie
Francophonie is an international organization of politics and governments with French as the mother or customary language, where a significant proportion of people are francophones , or where there is a notable affiliation with the French language or culture.Formally known as the Organisation...
), status of women
Women's rights in Canada
The history of feminism in Canada has been a gradual struggle aimed at establishing equal rights between women and men.- Role of women in World War I :...
, sports
Sport in Canada
Sports in Canada consists of a variety of games. Although there are many contests that Canada value, the most common are Ice hockey, Lacrosse, Canadian football, basketball, soccer, curling and baseball...
(including the 2010 Olympics
2010 Winter Olympics
The 2010 Winter Olympics, officially the XXI Olympic Winter Games or the 21st Winter Olympics, were a major international multi-sport event held from February 12–28, 2010, in Vancouver, British Columbia, Canada, with some events held in the suburbs of Richmond, West Vancouver and the University...
in Vancouver
Vancouver
Vancouver is a coastal seaport city on the mainland of British Columbia, Canada. It is the hub of Greater Vancouver, which, with over 2.3 million residents, is the third most populous metropolitan area in the country,...
), and multiculturalism
Multiculturalism
Multiculturalism is the appreciation, acceptance or promotion of multiple cultures, applied to the demographic make-up of a specific place, usually at the organizational level, e.g...
. It also oversees Royal visits of the Queen of Canada and members of the royal family to Canada. It was formerly a part of the Department of Communications, until that department's technical side was merged into the Department of Industry in 1996, forming the Department of Canadian Heritage from its non-technical side. In late 2008, the multiculturalism component of this department was transferred to the Department of Citizenship and Immigration.

The department's headquarters are in the Jules Léger Building (South) (Édifice Jules Léger (Sud)) in Terrasses de la Chaudière
Terrasses de la Chaudière
Terrasses de la Chaudière is a complex of government office buildings in Gatineau, Quebec, Canada. The complex was built in 1978 as part of Prime Minister Pierre Trudeau's initiative to see more federal workers based in the Quebec side of the Ottawa River. It was built by developer Robert Campeau...
, Gatineau
Gatineau
Gatineau is a city in western Quebec, Canada. It is the fourth largest city in the province. It is located on the northern banks of the Ottawa River, immediately across from Ottawa, Ontario, and together they form Canada's National Capital Region. Ottawa and Gatineau comprise a single Census...
, Quebec
Quebec
Quebec or is a province in east-central Canada. It is the only Canadian province with a predominantly French-speaking population and the only one whose sole official language is French at the provincial level....
, across the Ottawa River
Ottawa River
The Ottawa River is a river in the Canadian provinces of Ontario and Quebec. For most of its length, it now defines the border between these two provinces.-Geography:...
from the Canadian capital of Ottawa
Ottawa
Ottawa is the capital of Canada, the second largest city in the Province of Ontario, and the fourth largest city in the country. The city is located on the south bank of the Ottawa River in the eastern portion of Southern Ontario...
.