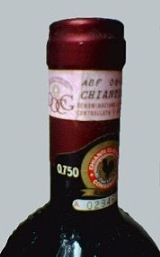 Encyclopedia
Denominazione di origine controllata ("Controlled designation of origin") is a quality assurance
Quality Assurance
Quality assurance, or QA for short, is the systematic monitoring and evaluation of the various aspects of a project, service or facility to maximize the probability that minimum standards of quality are being attained by the production process...
label for food
Food
Food is any substance consumed to provide nutritional support for the body. It is usually of plant or animal origin, and contains essential nutrients, such as carbohydrates, fats, proteins, vitamins, or minerals...
products, especially wines and various formaggi
Cheese
Cheese is a generic term for a diverse group of milk-based food products. Cheese is produced throughout the world in wide-ranging flavors, textures, and forms....
(Denominazione di Origine Protetta). It is modelled after the French
France
The French Republic , The French Republic , The French Republic , (commonly known as France , is a unitary semi-presidential republic in Western Europe with several overseas territories and islands located on other continents and in the Indian, Pacific, and Atlantic oceans. Metropolitan France...
AOC
Appellation d'Origine Contrôlée
Appellation d’origine contrôlée , which translates as "controlled designation of origin", is the French certification granted to certain French geographical indications for wines, cheeses, butters, and other agricultural products, all under the auspices of the government bureau Institut National...
. It was instituted in 1963 and overhauled in 1992 for compliance with the equivalent EU
European Union
The European Union is an economic and political union of 27 independent member states which are located primarily in Europe. The EU traces its origins from the European Coal and Steel Community and the European Economic Community , formed by six countries in 1958...
law on Protected Designation of Origin
Protected Geographical Status
Protected Geographical Status is a legal framework defined in European Union law to protect the names of regional foods. Protected Designation of Origin , Protected Geographical Indication and Traditional Speciality Guaranteed are distinct regimes of geographical indications within the framework...
, which came into effect that year.

There are three levels of labels: 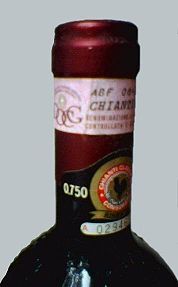 The need for a DOCG identification arose when the DOC designation was, in the view of many Italian food industries, given too liberally to different products. A new, more restrictive identification was then created, as similar as possible to the previous one so that buyers could still recognize it, but qualitatively different.

A notable difference for wines is that DOCG labelled wines are analysed and tasted by government–licensed personnel before being bottled. To prevent later manipulation, DOCG wine bottles then are sealed with a numbered governmental seal across the cap or cork.

Italian legislation additionally regulates the use of the following qualifying terms for wines:


Wines labelled DOC or DOCG may only be sold in bottles holding 5 litre
Litre
pic|200px|right|thumb|One litre is equivalent to this cubeEach side is 10 cm1 litre water = 1 kilogram water The litre is a metric system unit of volume equal to 1 cubic decimetre , to 1,000 cubic centimetres , and to 1/1,000 cubic metre...
s or less.

For wines produced in Bolzano, where German
German language
German is a West Germanic language, related to and classified alongside English and Dutch. With an estimated 90 – 98 million native speakers, German is one of the world's major languages and is the most widely-spoken first language in the European Union....
is an official language, DOC may alternatively be written as Kontrollierte Ursprungsbezeichnung and DOCG may be written as Kontrollierte und garantierte Ursprungsbezeichnung.