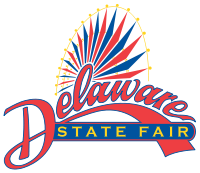 The Delaware State Fair is the annual state fair
State fair
A state fair is a competitive and recreational gathering of a U.S. state's population. It is a larger version of a county fair, often including only exhibits or competitors that have won in their categories at the more-local county fairs....
for the state of Delaware
Delaware
Delaware is a U.S. state located on the Atlantic Coast in the Mid-Atlantic region of the United States. It is bordered to the south and west by Maryland, and to the north by Pennsylvania...
. It is held in Harrington
Harrington, Delaware
Harrington is a city in Kent County, Delaware, United States. It is part of the Dover, Delaware Metropolitan Statistical Area. Harrington hosts the annual Delaware State Fair each July...
. The fair is a ten-day event at the end of July.

The Delaware State Fair has long been a center for regional entertainment, drawing in crowds from the rest of the state, Pennsylvania
Pennsylvania
The Commonwealth of Pennsylvania is a U.S. state that is located in the Northeastern and Mid-Atlantic regions of the United States. The state borders Delaware and Maryland to the south, West Virginia to the southwest, Ohio to the west, New York and Ontario, Canada, to the north, and New Jersey to...
, New Jersey
New Jersey
New Jersey is a state in the Northeastern and Middle Atlantic regions of the United States. , its population was 8,791,894. It is bordered on the north and east by the state of New York, on the southeast and south by the Atlantic Ocean, on the west by Pennsylvania and on the southwest by Delaware...
, and Maryland
Maryland
Maryland is a U.S. state located in the Mid Atlantic region of the United States, bordering Virginia, West Virginia, and the District of Columbia to its south and west; Pennsylvania to its north; and Delaware to its east...
. It is one of few local concert venues, so has been able to attract many popular acts to Delmarva, among them:

During the winter season the Centre Ice Rink
Centre Ice Rink
The Centre Ice Rink is a 49,000 sq. ft. facility built in 2002 that is based in Harrington, Delaware that hosts activities like Ice Hockey, Figure Skating and Public skating in the Winter...
located on the fair grounds hosts public skating and Ice hockey
Ice hockey
Ice hockey, often referred to as hockey, is a team sport played on ice, in which skaters use wooden or composite sticks to shoot a hard rubber puck into their opponent's net. The game is played between two teams of six players each. Five members of each team skate up and down the ice trying to take...
sessions.