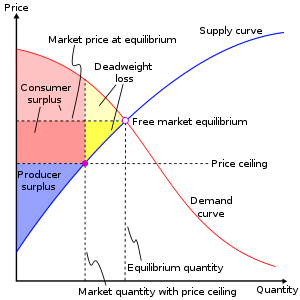 In economics
Economics
Economics is the social science that analyzes the production, distribution, and consumption of goods and services. The term economics comes from the Ancient Greek from + , hence "rules of the house"...
, a deadweight loss (also known as excess burden or allocative inefficiency) is a loss of economic efficiency that can occur when equilibrium for a good or service is not Pareto optimal
Pareto efficiency
Pareto efficiency, or Pareto optimality, is a concept in economics with applications in engineering and social sciences. The term is named after Vilfredo Pareto, an Italian economist who used the concept in his studies of economic efficiency and income distribution.Given an initial allocation of...
. In other words, either people who would have more marginal benefit than marginal cost
Marginal cost
In economics and finance, marginal cost is the change in total cost that arises when the quantity produced changes by one unit. That is, it is the cost of producing one more unit of a good...
are not buying the product, or people who have more marginal cost than marginal benefit are buying the product.

Causes of deadweight loss can include monopoly pricing
Monopoly
A monopoly exists when a specific person or enterprise is the only supplier of a particular commodity...
(in the case of artificial scarcity
Artificial scarcity
Artificial scarcity describes the scarcity of items even though the technology and production capacity exists to create an abundance. The term is aptly applied to non-rival resources, i.e. those that do not diminish due to one person's use, although there are other resources which could be...
), externalities
Externality
In economics, an externality is a cost or benefit, not transmitted through prices, incurred by a party who did not agree to the action causing the cost or benefit...
, taxes or subsidies
Effect of taxes and subsidies on price
Taxes and subsidies change the price of goods and, as a result, the quantity consumed.- Tax impact :A marginal tax on the sellers of a good will shift the supply curve to the left until the vertical distance between the two supply curves is equal to the per unit tax; when other things remain equal,...
, and binding price ceiling
Price ceiling
A price ceiling is a government-imposed limit on the price charged for a product. Governments intend price ceilings to protect consumers from conditions that could make necessary commodities unattainable. However, a price ceiling can cause problems if imposed for a long period without controlled...
s or floors
Price floor
A price floor is a government- or group-imposed limit on how low a price can be charged for a product. For a price floor to be effective, it must be greater than the equilibrium price.-Effectiveness of price floors:...
. The term deadweight loss may also be referred to as the "excess burden" of monopoly or taxation.

For example, consider a market for nails where the cost of each nail is 10 cents and the demand will decrease linearly from a high demand for free nails to zero demand for nails at $1.10. In a perfectly competitive
Perfect competition
In economic theory, perfect competition describes markets such that no participants are large enough to have the market power to set the price of a homogeneous product. Because the conditions for perfect competition are strict, there are few if any perfectly competitive markets...
market, producers would have to charge a price of 10 cents and every customer whose marginal benefit exceeds 10 cents would have a nail. However if there is one producer who has a monopoly on the product, then they will charge whatever price will yield the greatest profit. For this market, the producer would charge 60 cents and thus exclude every customer who had less than 60 cents of marginal benefit. The deadweight loss is then the economic benefit forgone by these customers due to the monopoly pricing.

Conversely, deadweight loss can also come from consumers buying a product even if it costs more than it benefits them. To describe this, let's use the same nail market, but instead it will be perfectly competitive, with the government giving a 3 cent subsidy to every nail produced. This 3 cent subsidy will push the market price of each nail down to 7 cents. Some consumers then buy nails even though the benefit to them is less than the real cost of 10 cents. This unneeded expense then creates the deadweight loss: resources are not being used efficiently.

If the price of a glass of beer is $3.00 and the price of a glass of wine is $3.00, a consumer might prefer to drink beer. If the government decides to levy a beer tax of $3.00 per glass, the consumer might prefer to drink wine. The excess burden of taxation
Excess burden of taxation
In economics, the excess burden of taxation, also known as the distortionary cost or deadweight loss of taxation, is one of the economic losses that society suffers as the result of a tax. Economic theory posits that distortions changes the amount and type of economic behavior from that which...
is the loss of utility to the consumer for drinking wine instead of beer, since everything else remains unchanged.

In modern economic literature, the most common measure of a taxpayer’s loss of a tax is the equivalent variation. The loss in excess of the tax is the difference between the tax amount and the lump sum tax that the taxpayer would be willing to pay to avoid the tax. However, this is not the only interpretation and Lind & Granqvist (2010) point out that Pigou did not use a lump sum tax as the point of reference when discussing deadweight loss (excess burden).
The source of this article is wikipedia, the free encyclopedia.  The text of this article is licensed under the GFDL.