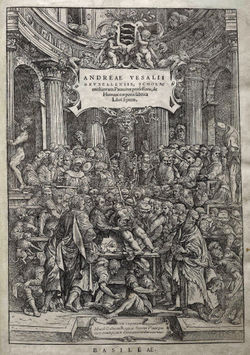 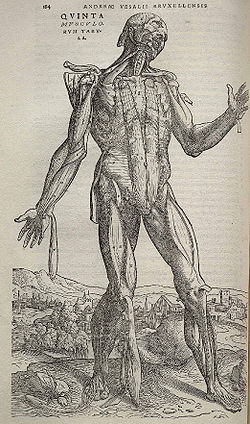 De humani corporis fabrica libri septem (On the fabric of the human body in seven books) is a textbook of human anatomy written by Andreas Vesalius (1514–1564) in 1543.

The book is based on his Paduan
University of Padua
The University of Padua is a premier Italian university located in the city of Padua, Italy. The University of Padua was founded in 1222 as a school of law and was one of the most prominent universities in early modern Europe. It is among the earliest universities of the world and the second...
lectures, during which he deviated from common practice by dissecting a corpse to illustrate what he was discussing. It presents a careful examination of the organs and the complete structure of the human body. This would not have been possible without the many advances that had been made during the Renaissance
Renaissance
The Renaissance was a cultural movement that spanned roughly the 14th to the 17th century, beginning in Italy in the Late Middle Ages and later spreading to the rest of Europe. The term is also used more loosely to refer to the historical era, but since the changes of the Renaissance were not...
, including both the artistic developments and the technical development of printing. Because of this, he was able to produce illustrations superior to any that had been produced up to then.

Fabrica rectified some of Galen
Galen
Aelius Galenus or Claudius Galenus , better known as Galen of Pergamon , was a prominent Roman physician, surgeon and philosopher...
's worst errors, including the notion that the great blood vessels originated from the liver. Even with his improvements, however, Vesalius clung to some of Galen's errors, such as the idea that there was a different type of blood flowing through veins than arteries. It was not until William Harvey
William Harvey
William Harvey was an English physician who was the first person to describe completely and in detail the systemic circulation and properties of blood being pumped to the body by the heart...
's work on the circulation of the blood that this misconception of Galen would be rectified in Europe
Europe
Europe is, by convention, one of the world's seven continents. Comprising the westernmost peninsula of Eurasia, Europe is generally 'divided' from Asia to its east by the watershed divides of the Ural and Caucasus Mountains, the Ural River, the Caspian and Black Seas, and the waterways connecting...
.

Vesalius had the work published at the age of 28, taking great pains to ensure its quality. The illustrations are of great artistic merit and are generally attributed by modern scholars to the "studio of Titian" rather than Johannes Stephanus of Calcar
Jan Van Calcar
Jan Steven van Calcar was a Netherlandish-born Italian painter.-Life:Calcar was born in the Duchy of Cleves sometime between 1499 and 1510. Vasari refers to him several times, mainly with respect to his having been a pupil of Titian...
, who provided drawings for Vesalius' earlier tracts, but in a much inferior style. The woodcuts were greatly superior to the illustrations in anatomical atlases of the day, which were often made by anatomy professors themselves. The woodcuts were transported to Basel, Switzerland, as Vesalius wished that the work be published by one of the foremost printers of the time, Joannis Oporini. The illustrations were also created using engraved copper plates (called intaglio), which allowed for very fine detail (see 'Scientific Revolutions' by Brian S. Baigrie, pages 40-49 for more information and a translation of Vesalius' preface).

The success of Fabrica ensured the health of Vesalius' coffers, and in time, fame. He was appointed physician to the Holy Roman Emperor Charles V
Charles V, Holy Roman Emperor
Charles V was ruler of the Holy Roman Empire from 1519 and, as Charles I, of the Spanish Empire from 1516 until his voluntary retirement and abdication in favor of his younger brother Ferdinand I and his son Philip II in 1556.As...
; Vesalius had dedicated the work to the ruler, and presented him with the first published copy (bound in silk of imperial purple, with specially hand-painted illustrations not found in any other copy). The Fabrica was republished in 1555.

A copy of the book clad in human skin
Anthropodermic bibliopegy
Anthropodermic bibliopegy is the practice of binding books in human skin. Though extremely uncommon in modern times, the technique dates back to at least the 17th century...
was donated to Brown University
Brown University
Brown University is a private, Ivy League university located in Providence, Rhode Island, United States. Founded in 1764 prior to American independence from the British Empire as the College in the English Colony of Rhode Island and Providence Plantations early in the reign of King George III ,...
's John Hay Library by an alumnus. Its cover is "polished to a smooth golden brown" and, according to those who have seen the book, it looks like fine leather. Covering books in human skin was not an uncommon practice a couple of centuries ago, utilizing the skin of executed convicts and poor people who died with no one to claim the body.

Of pharmacological interest, Fabrica mentions Digitalis
Digitalis
Digitalis is a genus of about 20 species of herbaceous perennials, shrubs, and biennials that are commonly called foxgloves. This genus was traditionally placed in the figwort family Scrophulariaceae, but recent reviews of phylogenetic research have placed it in the much enlarged family...
, which is still an important Inotropic Agent used to treat congestive heart failure.