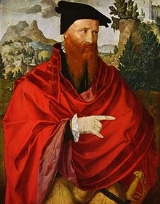 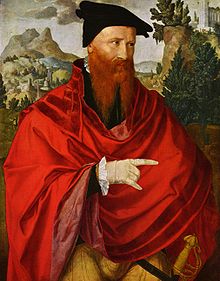 David Joris was an important Anabaptist
Anabaptist
Anabaptists are Protestant Christians of the Radical Reformation of 16th-century Europe, and their direct descendants, particularly the Amish, Brethren, Hutterites, and Mennonites....
leader in the Netherlands
Netherlands
The Netherlands is a constituent country of the Kingdom of the Netherlands, located mainly in North-West Europe and with several islands in the Caribbean. Mainland Netherlands borders the North Sea to the north and west, Belgium to the south, and Germany to the east, and shares maritime borders...
before 1540.

Joris was probably born in Flanders
Flanders
Flanders is the community of the Flemings but also one of the institutions in Belgium, and a geographical region located in parts of present-day Belgium, France and the Netherlands. "Flanders" can also refer to the northern part of Belgium that contains Brussels, Bruges, Ghent and Antwerp...
, the son of Marytje and Georgius Joris de Koman, an amateur actor and shopkeeper. He was a disciple of Melchior Hoffman
Melchior Hoffman
Melchior Hoffman was an Anabaptist prophet and a visionary leader in northern Germany and the Netherlands.-Life:Hoffman was born at Schwäbisch Hall in Franconia before 1500...
.

By trade David Joris was a glass painter or tinsel painter, having learned the art in Antwerp. In 1524 he married Dirckgen Willems, and also took interest in the Reformation
Protestant Reformation
The Protestant Reformation was a 16th-century split within Western Christianity initiated by Martin Luther, John Calvin and other early Protestants. The efforts of the self-described "reformers", who objected to the doctrines, rituals and ecclesiastical structure of the Roman Catholic Church, led...
movement of Martin Luther
Martin Luther
Martin Luther was a German priest, professor of theology and iconic figure of the Protestant Reformation. He strongly disputed the claim that freedom from God's punishment for sin could be purchased with money. He confronted indulgence salesman Johann Tetzel with his Ninety-Five Theses in 1517...
. In 1533 he accepted the ideas of the Anabaptists, and was baptized in Delft by Obbe Philips
Obbe Philips
Obbe Philips was one of the early founders of Dutch Anabaptism. He was the illegitimate son of a Roman Catholic priest from Leeuwarden. Philips studied medicine, and became a barber and a surgeon...
. According to the Mennonite Encyclopedia, "He was an influential figure in Anabaptism's consolidation period following the fall of Münster
Münster Rebellion
The Münster Rebellion was an attempt by radical Anabaptists to establish a communal sectarian government in the German city of Münster. The city became an Anabaptist center from 1534 to 1535, and fell under Anabaptist rule for 18 months — from February 1534, when the city hall was seized and...
." He rejected the violence of Münster
Münster
Münster is an independent city in North Rhine-Westphalia, Germany. It is located in the northern part of the state and is considered to be the cultural centre of the Westphalia region. It is also capital of the local government region Münsterland...
, but theoretically accepted polygamy
Polygamy
Polygamy is a marriage which includes more than two partners...
(he is not known to have practiced it). After the Münster debacle, a number of diverse disciples of Hoffman gathered for counsel at Bocholt
Bocholt
There are two towns called Bocholt:* Bocholt, Germany* Bocholt, Belgium...
in 1536. Joris had some success in highlighting their common beliefs, while diffusing the ideas of those who wanted vengeance. He believed that God would take vengeance, but that the saints should not. He promoted compromise on the question of polygamy, stating he thought the number of wives a man had was not important, as long as the family obeyed God. The group made no decision on the issue. David Joris remained on the "mystic" edge of Anabaptism, leading by citing dreams, visions and prophecies. Against this is his rationalist approach to the topic of the devil and supernatural evil. David Joris anticipated the views of Thomas Hobbes
Thomas Hobbes
Thomas Hobbes of Malmesbury , in some older texts Thomas Hobbs of Malmsbury, was an English philosopher, best known today for his work on political philosophy...
, John Epps
John Epps
Dr John Epps was best known as a "homoeopathic physician", although his influence was wider as he was involved in "the advancement of commercial, political or religious freedom".-Early years and education:...
and John Thomas
John Thomas (Christadelphian)
Dr. John Thomas was the founder of the Christadelphian movement, a Restorationist religion with doctrines similar in part to some 16th century Antitrinitarian Rationalist Socinians and the 16th century Swiss-German pacifist Anabaptists.-Early life:John Thomas M.D., born in Hoxton Square, Hackney,...
in interpreting the devil as an allegory.

For a time he was a theological combatant with emerging leader Menno Simons
Menno Simons
Menno Simons was an Anabaptist religious leader from the Friesland region of the Low Countries. Simons was a contemporary of the Protestant Reformers and his followers became known as Mennonites...
. Menno considered Joris a compromiser; Joris thought Menno excessively literal. Joris moved to Basel
Basel
Basel or Basle In the national languages of Switzerland the city is also known as Bâle , Basilea and Basilea is Switzerland's third most populous city with about 166,000 inhabitants. Located where the Swiss, French and German borders meet, Basel also has suburbs in France and Germany...
in 1544 and protected himself by living under the assumed name Johann van Brugge. He joined the Reformed Church, but he continued his theological writings on Anabaptism. This reflects both his opinion that "to the pure all things are pure", and his developing view that external symbols were less important than inner faith.

His wife Dirckgen died 22 August 1556. David died three days later and was buried in the church of St Leonard, Basel. Anabaptist leader Nicolas van Blesdijk, the husband of his eldest daughter, became an opponent of Joris' teachings. In 1559 he revealed Joris' theology to the authorities of Basel. David Joris was posthumously convicted of heresy, and his body exhumed and burned on 13 May 1559. A portrait of Joris, by the Dutch painter Jan van Scorel
Jan van Scorel
Jan van Scorel was an influential Dutch painter credited with the introduction of High Italian Renaissance art to the Netherlands.-Biography:He was born in Schoorl, north of Alkmaar and close to Egmond Abbey...
, is now displayed in the Oeffentliche Kunstsammlung at Basel.

The Mennonite Encyclopedia divides Joris' religious career into "four overlapping phases: Sacramentarian (1524–1530); Melchiorite sympathizer (1531–1534) Anabaptist leader (1534–ca.1543); and Spiritualist (ca. 1540–1556)." In addition to his spiritualism, Joris developed nicodemite
Nicodemite
Nicodemite is term that 'generally denotes a secret or timid adherent'. Most often it is used as a term of disparagement, applied to persons who are suspected of public misrepresentation of their actual religious beliefs by the practice of and dissimulation .Introduced into 16th century religious...
practices from 1534 on.