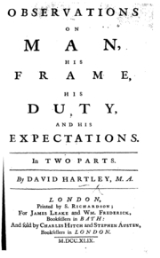 Encyclopedia
David Hartley was an English philosopher
Philosophy
Philosophy is the study of general and fundamental problems, such as those connected with existence, knowledge, values, reason, mind, and language. Philosophy is distinguished from other ways of addressing such problems by its critical, generally systematic approach and its reliance on rational...
and founder of the Associationist
Associationism
Associationism in philosophy refers to the idea that mental processes operate by the association of one state with its successor states.The idea is first recorded in Plato and Aristotle, especially with regard to the succession of memories....
school of psychology
Psychology
Psychology is the study of the mind and behavior. Its immediate goal is to understand individuals and groups by both establishing general principles and researching specific cases. For many, the ultimate goal of psychology is to benefit society...
.

David Hartley was born in June 1705 in the vicinity of Halifax
Halifax, West Yorkshire
Halifax is a minster town, within the Metropolitan Borough of Calderdale in West Yorkshire, England. It has an urban area population of 82,056 in the 2001 Census. It is well-known as a centre of England's woollen manufacture from the 15th century onward, originally dealing through the Halifax Piece...
, Yorkshire
Yorkshire
Yorkshire is a historic county of northern England and the largest in the United Kingdom. Because of its great size in comparison to other English counties, functions have been increasingly undertaken over time by its subdivisions, which have also been subject to periodic reform...
. His mother died three months after his birth. His father, an Anglican clergyman, died when David was only fifteen. He was educated at Bradford Grammar School
Bradford Grammar School
Bradford Grammar School is a co-educational, independent school in Frizinghall, Bradford, West Yorkshire. Headmaster, Stephen Davidson is a member of the Headmasters' and Headmistresses' Conference . The school was founded in 1548 and granted its Charter by King Charles II in 1662...
and Jesus College, Cambridge
Jesus College, Cambridge
Jesus College is a constituent college of the University of Cambridge, England.The College was founded in 1496 on the site of a Benedictine nunnery by John Alcock, then Bishop of Ely...
, of which society he became a fellow in 1727. Originally intended for the Church, he was deterred from taking orders by certain scruples as to signing the Thirty-nine Articles
Thirty-Nine Articles
The Thirty-Nine Articles of Religion are the historically defining statements of doctrines of the Anglican church with respect to the controversies of the English Reformation. First established in 1563, the articles served to define the doctrine of the nascent Church of England as it related to...
, and took up the study of medicine
Medicine
Medicine is the science and art of healing. It encompasses a variety of health care practices evolved to maintain and restore health by the prevention and treatment of illness....
. Nevertheless, he remained a member of the Church of England
Church of England
The Church of England is the officially established Christian church in England and the Mother Church of the worldwide Anglican Communion. The church considers itself within the tradition of Western Christianity and dates its formal establishment principally to the mission to England by St...
, and was on intimate terms with the most distinguished churchmen of his day. He considered it his duty to obey ecclesiastical as well as civil authorities. The doctrine to which he most strongly objected was that of eternal punishment.

Hartley was married twice. The first time in 1730 to Alice Rowley, who died the next year giving birth to their son David
David Hartley (the Younger)
David Hartley, the younger , statesman, scientific inventor, and the son of the philosopher David Hartley. He was Member of Parliament for Kingston upon Hull, and also held the position of His Britannic Majesty's Minister Plenipotentiary, appointed by King George III to treat with the United...
(1731–1813). His second marriage was in 1735 to Elizabeth (1713–78), the daughter of Robert Packer
Robert Packer
Robert Packer was an English politician who sat in the House of Commons in two periods between 1646 and 1679, as well as being Usher of the Exchequer....
of Shellingford
Shellingford
Shellingford, historically also spelt Shillingford is a village and civil parish about south-east of Faringdon in the Vale of White Horse. It was part of Berkshire until the 1974 Local Government Act transferred it to Oxfordshire....
and Bucklebury
Bucklebury
Bucklebury is a village and civil parish in West Berkshire. The village is about north-east of Newbury and about north of the A4 road. It has a population of 2,066.-Geography:...
, both in Berkshire
Berkshire
Berkshire is a historic county in the South of England. It is also often referred to as the Royal County of Berkshire because of the presence of the royal residence of Windsor Castle in the county; this usage, which dates to the 19th century at least, was recognised by the Queen in 1957, and...
. This marriage was undertaken in spite of the opposition of Elizabeth's influential and very wealthy family. This union produced two additional children, Mary (1736–1803) and Winchcombe Henry (1740–94). Hartley practised as a physician at Newark, Bury St Edmunds, London
London
London is the capital city of :England and the :United Kingdom, the largest metropolitan area in the United Kingdom, and the largest urban zone in the European Union by most measures. Located on the River Thames, London has been a major settlement for two millennia, its history going back to its...
, and lastly at Bath, where he died in 1757.

He was a vegetarian.

His principal work Observations on Man, his Frame, his Duty, and his Expectations was published in 1749, three years after Condillac
Étienne Bonnot de Condillac
Étienne Bonnot de Condillac was a French philosopher and epistemologist who studied in such areas as psychology and the philosophy of the mind.-Biography:...
's Essai sur l'origine des connaissances humaines, in which similar theories were expounded. It is in two parts—the first dealing with the frame of the human body and mind, and their mutual connections and influences, the second with the duty and expectations of mankind. His two main theories are the doctrine of vibrations and the doctrine of associations. His physical theory, he tells us, was drawn from certain speculations as to nervous action which Isaac Newton
Isaac Newton
Sir Isaac Newton PRS was an English physicist, mathematician, astronomer, natural philosopher, alchemist, and theologian, who has been "considered by many to be the greatest and most influential scientist who ever lived."...
had published in his Principia. His psychological theory was suggested by the Dissertation concerning the Fundamental Principles of Virtue or Morality, which was written by a clergyman named John Gay (1699—1745), and prefixed by Bishop Law to his translation of Archbishop King's Latin
Latin
Latin is an Italic language originally spoken in Latium and Ancient Rome. It, along with most European languages, is a descendant of the ancient Proto-Indo-European language. Although it is considered a dead language, a number of scholars and members of the Christian clergy speak it fluently, and...
work on the Origin of Evil, its chief object being to show that sympathy and conscience are developments by means of association from the selfish feelings.

The outlines of Hartley's theory are as follows. Like John Locke
John Locke
John Locke FRS , widely known as the Father of Liberalism, was an English philosopher and physician regarded as one of the most influential of Enlightenment thinkers. Considered one of the first of the British empiricists, following the tradition of Francis Bacon, he is equally important to social...
, he asserted that, prior to sensation, the human mind is a blank. By a growth from simple sensations, those states of consciousness which appear most remote from sensation come into being. And the one law of growth of which Hartley took account was the law of contiguity, synchronous and successive. By this law he sought to explain, not only the phenomena of memory, which others had similarly explained before him, but also the phenomena of emotion, of reasoning, and of voluntary and involuntary action (see Association of Ideas
Association of Ideas
Association of Ideas, or Mental association, is a term used principally in the history of philosophy and of psychology to refer to explanations about the conditions under which representations arise in consciousness, and also for a principle put forward by an important historical school of thinkers...
). A friend, associate, and one of his chief advocates, was Joseph Priestley
Joseph Priestley
Joseph Priestley, FRS was an 18th-century English theologian, Dissenting clergyman, natural philosopher, chemist, educator, and political theorist who published over 150 works...
(1733–1804), the discoverer of oxygen. Priestley was one of the foremost scientists of his age.

Hartley's physical theory gave birth to the modern study of the intimate connection of physiological and psychical facts, though his physical theory in itself is inadequate. He believed that sensation is the result of a vibration of the minute particles of the medulla
Medulla oblongata
The medulla oblongata is the lower half of the brainstem. In discussions of neurology and similar contexts where no ambiguity will result, it is often referred to as simply the medulla...
ry substance of the nerves, to account for which he postulated, with Newton, a subtle elastic ether
Aether (classical element)
According to ancient and medieval science aether , also spelled æther or ether, is the material that fills the region of the universe above the terrestrial sphere.-Mythological origins:...
, rare in the interstices of solid bodies and in their close neighbourhood, and denser as it recedes from them. Pleasure is the result of moderate vibrations, pain of vibrations so violent as to break the continuity of the nerves. These vibrations leave behind them in the brain a tendency to fainter vibrations or "vibratiuncles" of a similar kind, which correspond to "ideas of sensation." This accounts for memory.

The course of reminiscence and of the thoughts generally, when not immediately dependent upon external sensation, is accounted for by the idea that there are always vibrations in the brain on account of its heat and the pulsation of its arteries. The nature of these vibrations is determined by each man's past experience, and by the circumstances of the moment, which causes one or another tendency to prevail over the rest. Sensations which are often associated together become each associated with the ideas corresponding to the others; and the ideas corresponding to the associated sensations become associated together, sometimes so intimately that they form what appears to be a new simple idea, not without careful analysis resolvable into its component parts.

Starting from a detailed account of the phenomena of the senses, Hartley tried to show how, by the above laws, all the emotions, which he analyses with considerable skill, may be explained. Locke
John Locke
John Locke FRS , widely known as the Father of Liberalism, was an English philosopher and physician regarded as one of the most influential of Enlightenment thinkers. Considered one of the first of the British empiricists, following the tradition of Francis Bacon, he is equally important to social...
's phrase "association of ideas" is employed throughout, "idea" being taken as including every mental state but sensation. He emphatically asserts the existence of pure disinterested sentiment, while declaring it to be a growth from the self-regarding feelings. Voluntary action is explained as the result of a firm connexion between a motion and a sensation or "idea," and, on the physical side, between an "ideal" and a motory vibration. Therefore in the Freewill controversy Hartley took his place as a determinist. It was only with reluctance, and when his speculations were nearly complete, that he came to a conclusion on this subject in accordance with his theory.