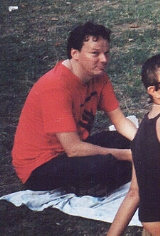 Encyclopedia
David Rolfe Graeber is an American
United States
The United States of America is a federal constitutional republic comprising fifty states and a federal district...
anthropologist and anarchist who currently holds the position of Reader in Social Anthropology
Social anthropology
Social Anthropology is one of the four or five branches of anthropology that studies how contemporary human beings behave in social groups. Practitioners of social anthropology investigate, often through long-term, intensive field studies , the social organization of a particular person: customs,...
at Goldsmiths, University of London. He was an associate professor of anthropology at Yale University
Yale University
Yale University is a private, Ivy League university located in New Haven, Connecticut, United States. Founded in 1701 in the Colony of Connecticut, the university is the third-oldest institution of higher education in the United States...
, although Yale controversially declined to rehire him, and his term there ended in June 2007. Graeber has a history of social and political activism, including his role in protests against the World Economic Forum
World Economic Forum
The World Economic Forum is a Swiss non-profit foundation, based in Cologny, Geneva, best known for its annual meeting in Davos, a mountain resort in Graubünden, in the eastern Alps region of Switzerland....
in New York City
New York City
New York is the most populous city in the United States and the center of the New York Metropolitan Area, one of the most populous metropolitan areas in the world. New York exerts a significant impact upon global commerce, finance, media, art, fashion, research, technology, education, and...
(2002), membership in the labor union Industrial Workers of the World
Industrial Workers of the World
The Industrial Workers of the World is an international union. At its peak in 1923, the organization claimed some 100,000 members in good standing, and could marshal the support of perhaps 300,000 workers. Its membership declined dramatically after a 1924 split brought on by internal conflict...
, and an early role in Occupy Wall Street
Occupy Wall Street
Occupy Wall Street is an ongoing series of demonstrations initiated by the Canadian activist group Adbusters which began September 17, 2011 in Zuccotti Park, located in New York City's Wall Street financial district...
.

Graeber's father, Kenneth Graeber, participated in the Spanish Revolution
Spanish Revolution
The Spanish Revolution was a workers' social revolution that began during the outbreak of the Spanish Civil War in 1936 and resulted in the widespread implementation of anarchist and more broadly libertarian socialist organizational principles throughout various portions of the country for two to...
in Barcelona
Barcelona
Barcelona is the second largest city in Spain after Madrid, and the capital of Catalonia, with a population of 1,621,537 within its administrative limits on a land area of...
and fought in the Spanish Civil War
Spanish Civil War
The Spanish Civil WarAlso known as The Crusade among Nationalists, the Fourth Carlist War among Carlists, and The Rebellion or Uprising among Republicans. was a major conflict fought in Spain from 17 July 1936 to 1 April 1939...
and his mother, then Ruth Rubinstein, was part of the original cast of the 1930s labor stage review Pins & Needles, performed entirely by garment workers . Graeber's father ultimately found work as a plate stripper and Graeber has sometimes suggested his working class upbringing might have played at least as large a role in the problems he later encountered in academic life as his political engagements.

David Graeber is the author of Fragments of an Anarchist Anthropology
Fragments of an Anarchist Anthropology
Fragments of an Anarchist Anthropology is one of a series of pamphlets published by Prickly Paradigm Press in Chicago. With the essay, anthropologist David Graeber attempts to outline areas of research that intellectuals might explore in creating a body of anarchist social theory.Graeber posits...
and Towards an Anthropological Theory of Value: The False Coin of Our Own Dreams. He has done extensive anthropological work in Madagascar
Madagascar
The Republic of Madagascar is an island country located in the Indian Ocean off the southeastern coast of Africa...
, writing his doctoral thesis (The Disastrous Ordeal of 1987: Memory and Violence in Rural Madagascar) on the continuing social division between the descendants of nobles and the descendants of former slaves. A book based on his dissertation, Lost People: Magic and the Legacy of Slavery in Madagascar appeared from Indiana University Press in September 2007. A book of collected essays, Possibilities: Essays on Hierarchy, Rebellion, and Desire was published by AK Press
AK Press
AK Press is a worker-managed independent publisher and book distributor that specialises in radical left and anarchist literature. It is collectively owned and operated.-History:...
in November 2007 and Direct Action: An Ethnography appeared from the same press in August 2009, as well as a collection of essays co-edited with Stevphen Shukaitis called “Constituent Imagination: Militant Investigations//Collective Theorization” (AK Press, May 2007). These were followed by a major historical monograph, Debt: the First Five Thousand Years (Melville House), which appeared in July 2011. He is currently said to be working on a briefer, more academic work tentatively entitled A New Prolegomenon to World History.

In May 2005, the Yale
Yale University
Yale University is a private, Ivy League university located in New Haven, Connecticut, United States. Founded in 1701 in the Colony of Connecticut, the university is the third-oldest institution of higher education in the United States...
anthropology department decided not to renew Graeber's contract, preventing him from coming up for consideration for tenure as he would otherwise have been scheduled to do in 2008. Pointing to Graeber's highly regarded anthropological scholarship, his supporters (including fellow anthropologists, former students, and anarchists) have accused the dismissal decision of being politically motivated. The Yale administration argued that Graeber's dismissal was in keeping with Yale's policy of granting tenure
Tenure
Tenure commonly refers to life tenure in a job and specifically to a senior academic's contractual right not to have his or her position terminated without just cause.-19th century:...
to few junior faculty and Yale has given no formal explanation for its actions. Graeber has suggested that his support of a student of his who was targeted for expulsion because of her membership in GESO
Graduate Employees and Students Organization
The Graduate Employees and Students Organization is a group of graduate student teachers and researchers which is trying to be recognized as a union at Yale University in New Haven, Connecticut....
, Yale's graduate student union
Trade union
A trade union, trades union or labor union is an organization of workers that have banded together to achieve common goals such as better working conditions. The trade union, through its leadership, bargains with the employer on behalf of union members and negotiates labour contracts with...
, may have played a role in Yale's decision.

In December 2005, Graeber agreed to leave the university after a one-year paid sabbatical. That spring he taught two final classes: an introduction to cultural anthropology (attended by over 200 students) and a course entitled “Direct Action and Radical Social Theory” – the only explicitly radical-themed course at Yale he ever taught.

On 25 May 2006, Graeber was invited to give the Malinowski Lecture at the London School of Economics
London School of Economics
The London School of Economics and Political Science is a public research university specialised in the social sciences located in London, United Kingdom, and a constituent college of the federal University of London...
. Maurice Bloch, Professor of Anthropology (retired) at the LSE and European Professor at the Collège de France
Collège de France
The Collège de France is a higher education and research establishment located in Paris, France, in the 5th arrondissement, or Latin Quarter, across the street from the historical campus of La Sorbonne at the intersection of Rue Saint-Jacques and Rue des Écoles...
, and world renowned scholar on Madagascar, made the following statement about Graeber in a letter to Yale University:
“His writings on anthropological theory are outstanding. I consider him the best anthropological theorist of his generation from anywhere in the world.”
The Anthropology Department at the LSE honors an anthropologist at a relatively early stage of his or her career to give The Malinowski Lecture each year, and only invite those who are considered to have made a significant contribution to anthropological theory. That same year, he was asked to present the keynote address in the 100th anniversary Diamond Jubilee meetings of the Association of Social Anthropologists http://www.theasa.org/conferences/asa06/panels/keynotegraeber.htm. In April 2011 he presented the Anthropology Department's annual Distinguished Lecture at Berkeley.

In addition to his academic work, Graeber has a history of both direct and indirect involvement in political activism, including playing an organizing role in, and speaking in favor of the Occupy Wall Street
Occupy Wall Street
Occupy Wall Street is an ongoing series of demonstrations initiated by the Canadian activist group Adbusters which began September 17, 2011 in Zuccotti Park, located in New York City's Wall Street financial district...
protests. Comparing it to the Arab Spring
Arab Spring
The Arab Spring , otherwise known as the Arab Awakening, is a revolutionary wave of demonstrations and protests occurring in the Arab world that began on Saturday, 18 December 2010...
, he claimed that this and other contemporary grassroots protests represent "the opening salvo in a wave of negotiations over the dissolution of the American Empire."