Encyclopedia
DSB, an abbreviation of Danske Statsbaner (Danish State Railways), is the largest Danish
Denmark
Denmark is a Scandinavian country in Northern Europe. The countries of Denmark and Greenland, as well as the Faroe Islands, constitute the Kingdom of Denmark . It is the southernmost of the Nordic countries, southwest of Sweden and south of Norway, and bordered to the south by Germany. Denmark...
train operating company, and the largest in Scandinavia
Scandinavia
Scandinavia is a cultural, historical and ethno-linguistic region in northern Europe that includes the three kingdoms of Denmark, Norway and Sweden, characterized by their common ethno-cultural heritage and language. Modern Norway and Sweden proper are situated on the Scandinavian Peninsula,...
. While DSB is responsible for passenger train operation on most of the Danish railways, goods transport and railway maintenance are outside its scope. DSB runs a commuter rail system, called S-train
S-Train
The S-train network is a combined urban rapid transit and suburban rail network of Metropolitan Copenhagen, Denmark. It connects the city center with the inner suburbs of Copenhagen, and has close to half of the stations within the urban city. The first line was opened in 1934...
, in the area around the Danish capital, Copenhagen
Copenhagen
Copenhagen is the capital and largest city of Denmark, with an urban population of 1,199,224 and a metropolitan population of 1,930,260 . With the completion of the transnational Øresund Bridge in 2000, Copenhagen has become the centre of the increasingly integrating Øresund Region...
, that connects the different areas and suburbs in the greater metropolitan area. DSB also operates some trains in Sweden
Sweden
Sweden , officially the Kingdom of Sweden , is a Nordic country on the Scandinavian Peninsula in Northern Europe. Sweden borders with Norway and Finland and is connected to Denmark by a bridge-tunnel across the Öresund....

On September 1, 1867, the Danish state took over Det danske Jernbane-Driftsselskab (The Danish Railway
Operation Company), the major railway company in Jutland
Jutland
Jutland , historically also called Cimbria, is the name of the peninsula that juts out in Northern Europe toward the rest of Scandinavia, forming the mainland part of Denmark. It has the North Sea to its west, Kattegat and Skagerrak to its north, the Baltic Sea to its east, and the Danish–German...
and Funen
Funen
Funen , with a size of 2,984 km² , is the third-largest island of Denmark following Zealand and Vendsyssel-Thy, and the 163rd largest island of the world. Funen is located in the central part of the country and has a population of 454,358 inhabitants . The main city is Odense, connected to the...
, and consequently, De jysk-fynske Statsbaner (The State Railways of Jutland and Funen) were formed.

The Danish state took over Det sjællandske Jernbaneselskab (The Railway Company of Zealand) on January 1, 1880, forming De sjællandske Statsbaner (The State Railways of Zealand). With the majority of railways on both sides of the Great Belt
Great Belt
The Great Belt is a strait between the main Danish islands of Zealand and Funen . Effectively dividing Denmark in two, the Belt was served by the Great Belt ferries from the late 19th century until the islands were connected by the Great Belt Fixed Link in 1997–98.-Geography:The Great Belt is the...
thus owned by the Danish state, it was not until October 1, 1885 that the companies of Jutland/Funen and Zealand merged into one national railway company, De danske Statsbaner (The Danish State Railways), the merger being finalised on April 1, 1893.

World War II
World War II
World War II, or the Second World War , was a global conflict lasting from 1939 to 1945, involving most of the world's nations—including all of the great powers—eventually forming two opposing military alliances: the Allies and the Axis...
left DSB with a fleet of outdated and worn-out trains, and although the use of motorised locomotives and DMU
Diesel multiple unit
A diesel multiple unit or DMU is a multiple unit train consisting of multiple carriages powered by one or more on-board diesel engines. They may also be referred to as a railcar or railmotor, depending on country.-Design:...
s was slowly starting to prevail during the 1920s and 1930s
1930s
File:1930s decade montage.png|From left, clockwise: Dorothea Lange's photo of the homeless Florence Thompson show the effects of the Great Depression; Due to the economic collapse, the farms become dry and the Dust Bowl spreads through America; The Battle of Wuhan during the Second Sino-Japanese...
, the diesel trains could not immediately satisfy the needs for pulling power. Thus, it was not until the mid-1950s that diesel locomotive
Diesel locomotive
A diesel locomotive is a type of railroad locomotive in which the prime mover is a diesel engine, a reciprocating engine operating on the Diesel cycle as invented by Dr. Rudolf Diesel...
s got a real foothold with DSB.

DSB's class MY
DSB class MY
The class MY is a series of diesel-electric locomotives built in the years 1954–1965 by NOHAB. A total of 59 units, numbered 1101–1159, were delivered to the Danish State Railways...
diesel locomotives, delivered from NOHAB
NOHAB
NOHAB was a manufacturing company in the city of Trollhättan, Sweden.The company was founded by Antenor Nydqvist, Johan Magnus Lidström and Carl Olof Holm in 1847 as Trollhättans Mekaniska Verkstad as a manufacturer of turbines for hydraulic power plants...
starting in 1954, proved themselves very reliable and economically feasible compared to the steam locomotives, eventually putting the age of steam to an end as well as being a decisive factor in DSB's choice of motive power for nearly three decades.

The 1960s were marked by an increasingly poor economy for DSB, leading to a steady staff reduction throughout the decade. However, this was also accompanied by the appearance of new technology, notably the utilisation of electronic equipment, improving the safety and efficiency of DSB's railway traffic. In 1972, along with the celebration of the 125th anniversary of railways in Denmark, DSB introduced a new, mainly red design (with engine rooms of locomotives painted black), replacing the traditional maroon livery with yellow winged wheel symbols. DSB's position was additionally strengthened by the oil crisis
1973 oil crisis
The 1973 oil crisis started in October 1973, when the members of Organization of Arab Petroleum Exporting Countries or the OAPEC proclaimed an oil embargo. This was "in response to the U.S. decision to re-supply the Israeli military" during the Yom Kippur war. It lasted until March 1974. With the...
in 1973.

In 1990, after a delay of several years, the IC3
IC3
The IC3 is a Danish-built high-comfort medium/long distance diesel multiple-unit train. The sets were built by ABB Scandia . This train model has been operating in Denmark and Sweden since 1989...
trains came into use, initially as lyntog, and in 1991 as ordinary intercity trains. The IC3 trains, being a specimen of the Flexliner type of multiple units, have a distinct appearance due to the rubber-framed ends, allowing access between separate trainsets when coupled together. This option is, however, very rarely used.

The Great Belt fixed link
Great Belt Fixed Link
The Great Belt Fixed Link is the fixed link between the Danish islands of Zealand and Funen across the Great Belt. It consists of a road suspension bridge and railway tunnel between Zealand and the island Sprogø, as well as a box girder bridge between Sprogø and Funen...
was opened for railway traffic in 1997 (a year before road traffic), replacing DSB's railway ferries. In 1997, infrastructural duties were branched off into a new agency under the Danish Ministry of Transport, Banestyrelsen (now: Banedanmark
Banedanmark
Banedanmark is a Danish company responsible for maintenance and traffic control of most of the Danish railway network...
), leaving DSB with the task of train operation. A new design was presented in 1998, as well as the announcement of the "Good Trains for All" plan, seeking to replace old and less comfortable trains by 2006/2007. DSB was turned into an independent public corporation on January 1, 1999.

The goods department of DSB, DSB Gods, was merged with Railion (now DB Schenker Rail) in 2001, and DSB now solely manages passenger rail service, including the operation of railway stations. 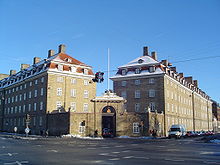 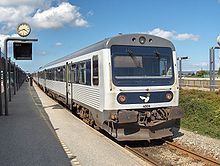 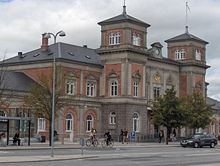 DSB is an independent public state-owned corporation under the Danish Ministry of Transport and Energy. This has been the case since 1999, and is the result of a political desire to liberalise
Liberalization
In general, liberalization refers to a relaxation of previous government restrictions, usually in areas of social or economic policy. In some contexts this process or concept is often, but not always, referred to as deregulation...
the Danish railways. Thus, DSB now operates on a for-profit basis, although it retains certain public service
Public services
Public services is a term usually used to mean services provided by government to its citizens, either directly or by financing private provision of services. The term is associated with a social consensus that certain services should be available to all, regardless of income...
commitments via contracts with the Ministry of Transport and Energy.

As of 2005, DSB employs about 9,000 people. Keld Sengeløv, the former president and CEO, died from a not disclosed illness while traveling with friends in Scotland
Scotland
Scotland is a country that is part of the United Kingdom. Occupying the northern third of the island of Great Britain, it shares a border with England to the south and is bounded by the North Sea to the east, the Atlantic Ocean to the north and west, and the North Channel and Irish Sea to the...
, UK on 3 September 2006. His successor wa Søren Eriksen, who was dismissed in March 2011 following the discovery of financial and contractual irregularities. 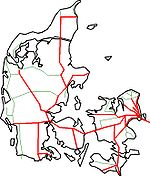 DSB operates several types of passenger trains, varying in number of stops and motive power. Apart from the S-train
S-Train
The S-train network is a combined urban rapid transit and suburban rail network of Metropolitan Copenhagen, Denmark. It connects the city center with the inner suburbs of Copenhagen, and has close to half of the stations within the urban city. The first line was opened in 1934...
s, types available for the general public include:

DSB and its joint ventures have contracts to operate the Roslagsbanan
Roslagsbanan
-SL southern network:*Stockholms östra–Djursholms Ösby–Roslags Näsby–Vallentuna–Lindholmen–Kårsta *Stockholms östra–Djursholms Ösby–Roslags Näsby–Åkersberga–Österskär...
in Stockholm
Stockholm
Stockholm is the capital and the largest city of Sweden and constitutes the most populated urban area in Scandinavia. Stockholm is the most populous city in Sweden, with a population of 851,155 in the municipality , 1.37 million in the urban area , and around 2.1 million in the metropolitan area...
, local trains around Gothenburg
Gothenburg
Gothenburg is the second-largest city in Sweden and the fifth-largest in the Nordic countries. Situated on the west coast of Sweden, the city proper has a population of 519,399, with 549,839 in the urban area and total of 937,015 inhabitants in the metropolitan area...
and Krösatågen services around Jönköping
Jönköping
-Notable people:*Lillian Asplund, RMS Titanic survivor*John Bauer, illustrator, painter*Amy Diamond, singer*Agnetha Fältskog, ABBA*Carl Henrik Fredriksson, editor-in-chief and co-founder of Eurozine*Anders Gustafsson, kayaker, Olympian...
. DSB Uppland, a subsidiary of DSB Sverige, will run Upplands Lokaltrafik
Upplands Lokaltrafik
Upplands Lokaltrafik is the primary operator of public transport buses and trains at the county level in Uppsala County, Sweden. Their name is derived from the historical province of Uppland, which included the modern county along with part of what is now Stockholm County.The green city buses in...
’s Upptåget trains from June 2011.