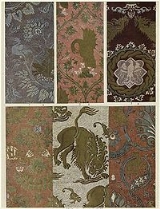 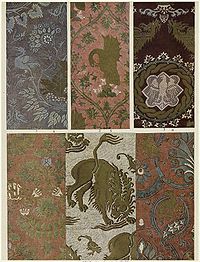 Damask is a reversible figured fabric of silk
Silk
Silk is a natural protein fiber, some forms of which can be woven into textiles. The best-known type of silk is obtained from the cocoons of the larvae of the mulberry silkworm Bombyx mori reared in captivity...
, wool
Wool
Wool is the textile fiber obtained from sheep and certain other animals, including cashmere from goats, mohair from goats, qiviut from muskoxen, vicuña, alpaca, camel from animals in the camel family, and angora from rabbits....
, linen
Linen
Linen is a textile made from the fibers of the flax plant, Linum usitatissimum. Linen is labor-intensive to manufacture, but when it is made into garments, it is valued for its exceptional coolness and freshness in hot weather....
, cotton
Cotton
Cotton is a soft, fluffy staple fiber that grows in a boll, or protective capsule, around the seeds of cotton plants of the genus Gossypium. The fiber is almost pure cellulose. The botanical purpose of cotton fiber is to aid in seed dispersal....
, or synthetic fiber
Synthetic fiber
Synthetic fibers are the result of extensive research by scientists to improve on naturally occurring animal and plant fibers. In general, synthetic fibers are created by forcing, usually through extrusion, fiber forming materials through holes into the air, forming a thread...
s, with a pattern formed by weaving
Weaving
Weaving is a method of fabric production in which two distinct sets of yarns or threads are interlaced at right angles to form a fabric or cloth. The other methods are knitting, lace making and felting. The longitudinal threads are called the warp and the lateral threads are the weft or filling...
. Damasks are woven with one warp
Warp (weaving)
In weaving cloth, the warp is the set of lengthwise yarns that are held in tension on a frame or loom. The yarn that is inserted over-and-under the warp threads is called the weft, woof, or filler. Each individual warp thread in a fabric is called a warp end or end. Warp means "that which is thrown...
yarn and one weft
Weft
In weaving, weft or woof is the yarn which is drawn through the warp yarns to create cloth. In North America, it is sometimes referred to as the "fill" or the "filling yarn"....
yarn, usually with the pattern in warp-faced satin
Satin
Satin is a weave that typically has a glossy surface and a dull back. It is a warp-dominated weaving technique that forms a minimum number of interlacings in a fabric. If a fabric is formed with a satin weave using filament fibres such as silk, nylon, or polyester, the corresponding fabric is...
weave and the ground in weft-faced or sateen
Sateen
Sateen, not to be confused with satin, is a type of fabric often found in bed sheets.Sateen is usually applied to cotton, or sometimes rayon. Better qualities are mercerized to give a higher sheen. Some are only calendered to produce the sheen but this disappears with washing and is not considered...
weave. Twill damasks include a twill
Twill
Twill is a type of textile weave with a pattern of diagonal parallel ribs . This is done by passing the weft thread over one or more warp threads and then under two or more warp threads and so on, with a "step" or offset between rows to create the characteristic diagonal pattern. Because of this...
-woven ground or pattern.

Damasks used one of the five basic weaving techniques of the Byzantine
Byzantine silk
Byzantine silk is silk woven in the Byzantine Empire from about the 4th century until the Fall of Constantinople in 1453.The Byzantine capital of Constantinople was the first significant silk-weaving center in Europe. Silk was one of the most important commodities in the Byzantine economy, used by...
and Islam
Islam
Islam . The most common are and .   : Arabic pronunciation varies regionally. The first vowel ranges from ~~. The second vowel ranges from ~~~...
ic weaving centres of the early Middle Ages
Middle Ages
The Middle Ages is a periodization of European history from the 5th century to the 15th century. The Middle Ages follows the fall of the Western Roman Empire in 476 and precedes the Early Modern Era. It is the middle period of a three-period division of Western history: Classic, Medieval and Modern...
, and derive their name from the city of Damascus
Damascus
Damascus , commonly known in Syria as Al Sham , and as the City of Jasmine , is the capital and the second largest city of Syria after Aleppo, both are part of the country's 14 governorates. In addition to being one of the oldest continuously inhabited cities in the world, Damascus is a major...
, which at the time was a large city active in both trading and manufacture. Damasks were scarce after the ninth century outside of Islamic Spain
Al-Andalus
Al-Andalus was the Arabic name given to a nation and territorial region also commonly referred to as Moorish Iberia. The name describes parts of the Iberian Peninsula and Septimania governed by Muslims , at various times in the period between 711 and 1492, although the territorial boundaries...
, but were revived in some places in the thirteenth century. The word "damask" is first seen in a Western European language in the mid-14th century in French. By the fourteenth century, damasks were being woven on draw loom
Loom
A loom is a device used to weave cloth. The basic purpose of any loom is to hold the warp threads under tension to facilitate the interweaving of the weft threads...
s in Italy. From the fourteenth to the sixteenth century, most damasks were woven in a single colour, with a glossy warp-faced satin pattern against a duller ground. Two-colour damasks had contrasting colour warps and wefts, and polychrome damasks added gold and other metallic threads or additional colors as supplemental brocading
Brocade
Brocade is a class of richly decorative shuttle-woven fabrics, often made in colored silks and with or without gold and silver threads. The name, related to the same root as the word "broccoli," comes from Italian broccato meaning "embossed cloth," originally past participle of the verb broccare...
wefts. Medieval damasks were usually woven in silk, but wool
Wool
Wool is the textile fiber obtained from sheep and certain other animals, including cashmere from goats, mohair from goats, qiviut from muskoxen, vicuña, alpaca, camel from animals in the camel family, and angora from rabbits....
and linen damasks were also woven.

damask weaves are commonly produced in monochromatic (single-colour) weaves in silk, linen or linen-type synthetic fabrics which feature patterns of flowers, fruit, and other designs. The long floats of satin-woven warp and weft threads cause soft highlights on the fabric which reflect light differently according to the position of the observer . Damask weaves appear most commonly in table linens, but also in clothing and furnishings. Modern damasks are woven on computerized Jacquard loom
Jacquard loom
The Jacquard loom is a mechanical loom, invented by Joseph Marie Jacquard in 1801, that simplifies the process of manufacturing textiles with complex patterns such as brocade, damask and matelasse. The loom is controlled by punched cards with punched holes, each row of which corresponds to one row...
s.
The source of this article is wikipedia, the free encyclopedia.  The text of this article is licensed under the GFDL.