According to the census estimate of 2006, there were 88,604 people, 10,689 households, and 8,511 families residing in the city. The population density
Population density
Population density is a measurement of population per unit area or unit volume. It is frequently applied to living organisms, and particularly to humans...
was 1,408.3 people per square mile (543.7/km²). There were 11,229 housing units at an average density of 516.0 per square mile (199.3/km²). The racial makeup of the city was 20% White, 22% African American, 1% Native American, 1% Asian, 1% Pacific Islander, 21.15% from other races
Race (United States Census)
Race and ethnicity in the United States Census, as defined by the Federal Office of Management and Budget and the United States Census Bureau, are self-identification data items in which residents choose the race or races with which they most closely identify, and indicate whether or not they are...
, and 6% from two or more races. Hispanic or Latino of any race were 50% of the population.

There were 9,689 households out of which 34.3% had children under the age of 18 living with them, 49.9% were married couples living together, 11.5% had a female householder with no husband present, and 32.8% were non-families. 27.6% of all households were made up of individuals and 10.8% had someone living alone who was 65 years of age or older. The average household size was 2.81 and the average family size was 3.43.

The median income for a household in the city was $34,312, and the median income for a family was $41,111. Males had a median income of $28,158 versus $23,701 for females. The per capita income
Per capita income
Per capita income or income per person is a measure of mean income within an economic aggregate, such as a country or city. It is calculated by taking a measure of all sources of income in the aggregate and dividing it by the total population...
for the city was $20,575. About 11.9% of families and 16.0% of the population were below the poverty line, including 19.0% of those under age 18 and 8.9% of those age 65 or over.

Woodland Indians and Creek Nation held the area of present-day Dalton, Georgia until the mid 18th century, when the Cherokee
Cherokee
The Cherokee are a Native American people historically settled in the Southeastern United States . Linguistically, they are part of the Iroquoian language family...
pushed the Creek to the west and south. The Cherokee Indians called the mountains of north Georgia their "Enchanted Land" until their forced removal in 1838, in a tragedy known today as the Trail of Tears
Trail of Tears
The Trail of Tears is a name given to the forced relocation and movement of Native American nations from southeastern parts of the United States following the Indian Removal Act of 1830...
.

By the time the last Cherokees had left, work was underway for a railroad, the Western and Atlantic, to join the Tennessee River
Tennessee River
The Tennessee River is the largest tributary of the Ohio River. It is approximately 652 miles long and is located in the southeastern United States in the Tennessee Valley. The river was once popularly known as the Cherokee River, among other names...
with the Chattahoochee River
Chattahoochee River
The Chattahoochee River flows through or along the borders of the U.S. states of Georgia, Alabama, and Florida. It is a tributary of the Apalachicola River, a relatively short river formed by the confluence of the Chattahoochee and Flint Rivers and emptying into Apalachicola Bay in the Gulf of...
. In 1847, the newly renamed railway was defined as a mile radius from the city center - the Western and Atlantic Depot. The final segment of this pivotal railway was completed in Tunnel Hill, Whitfield County, Ga. in 1850. A second railroad, the East Tennessee and Georgia was completed in 1852.

With the invention of the automobile, a cottage industry arose in the homes along "Peacock Alley", U.S. Highway 41. Running from Copper Harbor, Michigan, to Miami Beach, Florida, the route ran on paved state roads. It was designated in 1925 and signed in 1926. Women would sell quilts to drivers along this popular north-south route. From this early origin, the carpet tufting industry grew in Dalton. Today, Carpet Mills remain major area employers. 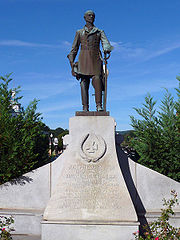 More than a year later, on September 19–20, 1863, massive Union and Confederate forces battled a few miles west of Dalton at Chickamauga, and later at Chattanooga. The war came to Whitfield County in the spring of 1864. The First Battle of Dalton included the battle of Rocky Face Ridge and Dug Gap began on May 7, 1864, and ended when General Johnston completed his withdrawal from Dalton on May 12.

The last campaign of the Confederacy, the John Bell Hood's Nashville Campaign attacked a Union blockhouse in Tilton before passing through Dalton and heading west. The U.S. government recently declared Dalton and Whitfield County to have more intact Civil War artifacts than any other place in the country. Also of interest is the site of the historic Western & Atlantic Railroad Station; one of the few still standing and restored to its original architectural state, this site is now the Dalton Depot Restaurant. The steel center marker for the original surveying of the City of Dalton is still inside the depot.

Dalton is often referred to as the "Carpet Capital of the World", home to 150+ carpet
Carpet
A carpet is a textile floor covering consisting of an upper layer of "pile" attached to a backing. The pile is generally either made from wool or a manmade fibre such as polypropylene,nylon or polyester and usually consists of twisted tufts which are often heat-treated to maintain their...
plants. The industry employs more than 30,000 people in the Whitfield County area. More than 90% of the functional carpet produced in the world today is made within a 65-mile radius of the city.

The agglomeration of the carpet industry in Dalton can be traced back to a wedding gift given in 1895 by a teenage girl, Catherine Evans Whitener, to her brother, Henry Alexander Evans, and his bride, Elizabeth Cramer. The gift was an unusual tufted bedspread. Copying a quilt pattern, she sewed thick cotton yarns with a running stitch into unbleached muslin, clipped the ends of the yarn so they would fluff out, and finally, washed the spread in hot water to hold the yarns by shrinking the fabric. Interest grew in young Catherine's bedspreads, and in 1900, she made the first sale of a spread for $2.50. Demand became so great for the spreads that by the 1930s, local women had "haulers", who would take the stamped sheeting and yarns to front porch workers. Often entire families worked to hand tuft the spreads for 10 to 25 cents per spread. Nearly 10,000 area cottage "tufters"--men, women, and children, were involved in the industry. Income generated by the bedspreads was instrumental in helping many area families survive the depression. Chenille bedspreads became amazingly popular all over the country and provided a new name for Dalton: the Bedspread Capital of the World.

When a form of mechanized carpet making was developed after World War II, Dalton be
came the center of the new industry due to the fact that specialized tufting skills were required and the city had a ready pool of workers with those skills.

By the 1970s manufacturers had begun to develop techniques to move from plain tufted carpet to sculpted carpet. Improved patterning, stain and wear resistance, and colors have made today's tufted carpet the choice for functional carpet for the vast majority of homes and moved woven carpet to a decorative role.

Carpets can be treated to give stain resistance with chemicals that have been the subject of investigation. The perfluorinated compound
Perfluorinated compounds
A perfluorinated compound is an organofluorine compound with all hydrogens replaced by fluorine on a carbon chain—but the molecule also contains at least one different atom or functional group. Thus, PFCs have properties similar to fluorocarbons as they are fluorocarbon derivatives...
PFOA
Perfluorooctanoic acid
Perfluorooctanoic acid , also known as C8 and perfluorooctanoate, is a synthetic, stable perfluorinated carboxylic acid and fluorosurfactant. One industrial application is as a surfactant in the emulsion polymerization of fluoropolymers. It has been used in the manufacture of such prominent...
was the subject of a monitoring scheme—proposed in December 2003 by five fluorotelomer
Fluorotelomer
Fluorotelomers are fluorocarbon-based oligomers, or telomers, synthesized by telomerization. Some fluorotelomers and fluorotelomer-based compounds are a source of environmentally persistent perfluorinated carboxylic acids such as PFOA and PFNA, while others are under extended...
manufacturers and accepted by a U.S. Environmental Protection Agency‎ work group—to determine if the industry was emitting PFOA or precursors, but the details were undetermined. A University of Georgia
University of Georgia
The University of Georgia is a public research university located in Athens, Georgia, United States. Founded in 1785, it is the oldest and largest of the state's institutions of higher learning and is one of multiple schools to claim the title of the oldest public university in the United States...
study, with 2006–2007 sampling, found PFOA levels among the highest ever measured for a nonspill location. PFOA was found in the Conasauga River
Conasauga River
The Conasauga River is a river that runs through southeast Tennessee and northwest Georgia. The Conasauga River is long and is home to 90 species of fish and 25 species of freshwater mussels...
from at a concentration of 1.5 parts per billion (ppb) or up to 1.15 ppb after data was published. Perfluorooctanesulfonic acid (PFOS) levels in the region were found to possibly be a threat to birds with long-term exposure. PFOS is no longer used by the carpet industry, and the eight carbon based chemistry for PFOA has been replaced by a six carbon one that does not have the same toxicological properties as PFOA. However, these compounds persist indefinitely in the environment.

The Dalton City School District holds grades pre-school to grade twelve, that consists of six elementary schools, a middle school, a high school, and an alternative school. The district has 366 full-time teachers and over 5,739 students.