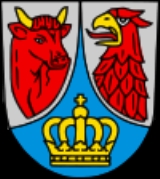 The Spreewald region has always been a centre of Sorbian
Sorbs
Sorbs are a Western Slavic people of Central Europe living predominantly in Lusatia, a region on the territory of Germany and Poland. In Germany they live in the states of Brandenburg and Saxony. They speak the Sorbian languages - closely related to Polish and Czech - officially recognized and...
culture. In medieval times the cities of Lübben and Luckau had successively been capitals of the margravate of Lower Lusatia
Lusatia
Lusatia is a historical region in Central Europe. It stretches from the Bóbr and Kwisa rivers in the east to the Elbe valley in the west, today located within the German states of Saxony and Brandenburg as well as in the Lower Silesian and Lubusz voivodeships of western Poland...
. From 1815 on Lower Lusatia was a part of Prussia
Prussia
Prussia was a German kingdom and historic state originating out of the Duchy of Prussia and the Margraviate of Brandenburg. For centuries, the House of Hohenzollern ruled Prussia, successfully expanding its size by way of an unusually well-organized and effective army. Prussia shaped the history...
. Throughout the 19th century the region remained an agriculturally used area, some urbanisation taking place in the very north (close to Berlin) only.

When the state of Brandenburg was newly founded in 1990, the districts of Lübben, Luckau and Königs Wusterhausen had been established. In 1993 the three districts were merged.

The Spree
Spree
The Spree is a river that flows through the Saxony, Brandenburg and Berlin states of Germany, and in the Ústí nad Labem region of the Czech Republic...
river enters the district in the southeast and leaves to the northeast. The wooded regions along its banks are called Spreewald. The Spreewald is the westernmost part of Lusatia. Especially the cities of Lübben and Lübbenau
Lübbenau
Lübbenau is a town of 17,897 in the Oberspreewald-Lausitz district of Brandenburg, Germany. It is located in the Spreewald about 82 km southeast of Berlin.-History:...
welcome many tourists each year, offering boat trips and relaxing holidays in the beautiful Spreewald
Spreewald
The Spreewald is situated about 100 km south-east of Berlin. It was designated a biosphere reserve by UNESCO in 1991. It is known for its traditional irrigation system which consists of more than 200 small channels within the area. The landscape was shaped during the ice-age...
nature.

The Dahme
Dahme River
The Dahme is a river that flows through the Brandenburg and Berlin states of Germany. It is a left bank tributary of the River Spree and is approximately in length.-Course:The source of the Dahme is near the eponymous town Dahme....
river is a tributary of the Spree. It forms many lakes in the northern part of the district. The Dahme leaves the district towards Berlin, where it is occasionally used for boat races. Eventually, it joins the Spree.