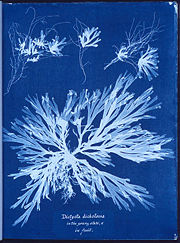 Cyanotype is a photographic printing process that gives a cyan-blue
Cyan
Cyan from , transliterated: kýanos, meaning "dark blue substance") may be used as the name of any of a number of colors in the blue/green range of the spectrum. In reference to the visible spectrum cyan is used to refer to the color obtained by mixing equal amounts of green and blue light or the...
print. The process was popular in engineering circles well into the 20th century. The simple and low-cost process enabled them to produce large-scale copies of their work, referred to as blueprint
Blueprint
A blueprint is a type of paper-based reproduction usually of a technical drawing, documenting an architecture or an engineering design. More generally, the term "blueprint" has come to be used to refer to any detailed plan....
s. Two chemicals are used in the process:

The English scientist and astronomer Sir John Herschel
John Herschel
Sir John Frederick William Herschel, 1st Baronet KH, FRS ,was an English mathematician, astronomer, chemist, and experimental photographer/inventor, who in some years also did valuable botanical work...
discovered this procedure in 1842. Though the process was developed by Herschel, he considered it as mainly a means of reproducing notes and diagrams, as in blueprints. It was Anna Atkins
Anna Atkins
Anna Atkins was an English botanist and photographer. She is often considered the first person to publish a book illustrated with photographic images. Some sources claim that she was the first woman to create a photograph.-Early life:Anna Children was born in Tonbridge, Kent, England in 1799...
who brought this to photography. She created a limited series of cyanotype books that documented ferns and other plant life from her extensive seaweed collection. Atkins placed specimens directly onto coated paper, allowing the action of light to create a sillhouette effect. By using this photogram
Photogram
A photogram is a photographic image made without a camera by placing objects directly onto the surface of a photo-sensitive material such as photographic paper and then exposing it to light. The result is a negative shadow image varying in tone, depending on the transparency of the objects used...
process, Anna Atkins is regarded as the first female photographer.

In a typical procedure, equal volumes of an 8.1% (w/v) solution of potassium ferricyanide and a 20% solution of ferric ammonium citrate are mixed. This mildly photosensitive solution is then applied to a receptive surface (such as paper or cloth) and allowed to dry in a dark place. Cyanotypes can be printed on any surface capable of soaking up the iron solution. Although watercolor paper is a preferred medium, cotton
Cotton
Cotton is a soft, fluffy staple fiber that grows in a boll, or protective capsule, around the seeds of cotton plants of the genus Gossypium. The fiber is almost pure cellulose. The botanical purpose of cotton fiber is to aid in seed dispersal....
, wool
Wool
Wool is the textile fiber obtained from sheep and certain other animals, including cashmere from goats, mohair from goats, qiviut from muskoxen, vicuña, alpaca, camel from animals in the camel family, and angora from rabbits....
and even gelatin
Gelatin
Gelatin is a translucent, colorless, brittle , flavorless solid substance, derived from the collagen inside animals' skin and bones. It is commonly used as a gelling agent in food, pharmaceuticals, photography, and cosmetic manufacturing. Substances containing gelatin or functioning in a similar...
sizing
Sizing
Sizing or size is any one of numerous specific substances that is applied to or incorporated in other material, especially papers and textiles, to act as a protecting filler or glaze....
on nonporous
Porous medium
A porous medium is a material containing pores . The skeletal portion of the material is often called the "matrix" or "frame". The pores are typically filled with a fluid...
surfaces have been used. Care should be taken to avoid alkaline-buffered papers which will cause degradation of the image over time.

A positive image can be produced by exposing it to a source of ultraviolet
Ultraviolet
Ultraviolet light is electromagnetic radiation with a wavelength shorter than that of visible light, but longer than X-rays, in the range 10 nm to 400 nm, and energies from 3 eV to 124 eV...
light (such as sunlight) with a negative. The UV light reduces the iron(III) to iron(II). This is followed by a complex reaction of the iron(II) complex with ferricyanide. The result is an insoluble, blue dye (ferric ferrocyanide) known as Prussian blue
Prussian blue
Prussian blue is a dark blue pigment with the idealized formula Fe718. Another name for the color Prussian blue is Berlin blue or, in painting, Parisian blue. Turnbull's blue is the same substance but is made from different reagents....
.

Upon exposure to ultraviolet light (such as that in sunlight), the iron in the exposed areas will reduce, turning the paper a steel-grey-blue color. The extent of color change is dependent on the amount of UV light, but acceptable results are usually obtained after 10-20 minute exposures on a bright, sunny day. The highlight values should appear overexposed as the water wash will reduce the final print values. Prints can be made with large format negatives
Negative (photography)
In photography, a negative may refer to three different things, although they are all related.-A negative:Film for 35 mm cameras comes in long narrow strips of chemical-coated plastic or cellulose acetate. As each image is captured by the camera onto the film strip, the film strip advances so that...
and lithography
Lithography
Lithography is a method for printing using a stone or a metal plate with a completely smooth surface...
film, or everyday objects can be used to make photogram
Photogram
A photogram is a photographic image made without a camera by placing objects directly onto the surface of a photo-sensitive material such as photographic paper and then exposing it to light. The result is a negative shadow image varying in tone, depending on the transparency of the objects used...
s.

In a cyanotype a blue is usually the desired color, however there are a variety of effects that can be achieved. These fall into three categories: reducing, intensifying and toning.

Reducing is the process of reducing the intensity of the blue. Sodium carbonate, ammonia, Clorox, TSP, borax, Dektol and other reagents can be used to do this. A good easily obtained reducer is Sunlight laundry detergent. When using a reducer it is important to pull the cyanotype out of the weak solution and put the cyanotype into a water bath to arrest the bleaching process.

Intensifying is the strengthening of the blue effect. These reagents can also be used to expedite the oxidation process the cyanotype undergoes. These reagents are Hydrogen Peroxide, Citric Acid, Lemon Juice, and Vinegar.

Toning is the process used to change the color of the iron in the print cyanotype. The colour change varies with the reagent used. There are a variety of elements that can be used, including tannic acid, oolong tea, wine, cat urine, and pyrogallic acid.

In contrast to most historical and present-day processes, cyanotype prints do not react well to basic
Base (chemistry)
For the term in genetics, see base A base in chemistry is a substance that can accept hydrogen ions or more generally, donate electron pairs. A soluble base is referred to as an alkali if it contains and releases hydroxide ions quantitatively...
environments. As a result it is not advised to store or present the print in chemically buffered museum board
Museum board
Museum board is a type of paperboard. Specifically, it is a white, acid free cardboard that bends fairly easily in one direction but is fairly stiff in the other, due to the grain of the paper fibers....
, as this will cause the image to fade. Another unusual characteristic of the cyanotype is its regenerative behaviour: prints that have faded due to prolonged exposure to light can often be significantly restored to their original tone by simply temporarily storing them in a dark environment.

Cyanotypes on cloth are permanent but must be washed by hand with non-phosphate soap so as to not turn the cyan to yellow.