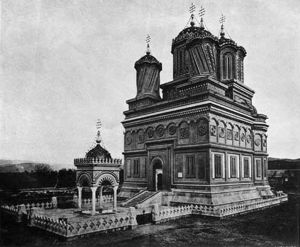 The Cathedral of Curtea de Argeș (early 16th century) is a church in Curtea de Argeș
Curtea de Arges
Curtea de Argeș is a city in Romania on the right bank of the Argeş River, where it flows through a valley of the lower Carpathians , on the railway from Pitești to the Turnu Roşu Pass. It is part of Argeș County. The city administers one village, Noapteș...
, Romania
Romania
Romania is a country located at the crossroads of Central and Southeastern Europe, on the Lower Danube, within and outside the Carpathian arch, bordering on the Black Sea...
, located in the grounds of a monastery. It is dedicated to Saint Nicholas
Saint Nicholas
Saint Nicholas , also called Nikolaos of Myra, was a historic 4th-century saint and Greek Bishop of Myra . Because of the many miracles attributed to his intercession, he is also known as Nikolaos the Wonderworker...
.

It resembles a very large and elaborate mausoleum, built in Byzantine style, with Moorish arabesque
Arabesque
The arabesque is a form of artistic decoration consisting of "surface decorations based on rhythmic linear patterns of scrolling and interlacing foliage, tendrils" or plain lines, often combined with other elements...
s. In shape it is oblong, with a many-sided annex at the back. In the centre rises a dome
Dome
A dome is a structural element of architecture that resembles the hollow upper half of a sphere. Dome structures made of various materials have a long architectural lineage extending into prehistory....
, fronted by two smaller cupola
Cupola
In architecture, a cupola is a small, most-often dome-like, structure on top of a building. Often used to provide a lookout or to admit light and air, it usually crowns a larger roof or dome....
s, while a secondary dome, broader and loftier than the central one, springs from the annex. Each summit is crowned by an inverted pear-shaped stone, bearing a triple cross, emblematic of the Trinity.

The windows are mere slits; those of the tambour
Tambour
In classical architecture, a tambour is the inverted bell of the Corinthian capital around which are carved acanthus leaves for decoration....
s (the cylinders on which the cupolas rest) are curved and slant at an angle of 70 degrees, as though the tambours were leaning to one side. Between the pediment
Pediment
A pediment is a classical architectural element consisting of the triangular section found above the horizontal structure , typically supported by columns. The gable end of the pediment is surrounded by the cornice moulding...
and the cornice a thick corded moulding
Molding (decorative)
Molding or moulding is a strip of material with various profiles used to cover transitions between surfaces or for decoration. It is traditionally made from solid milled wood or plaster but may be made from plastic or reformed wood...
is carried round the main building. Above this comes a row of circular shields, adorned with intricate arabesques, while bands and wreaths of lilies are everywhere sculptured on the windows, balconies, tambours and cornices, adding lightness to the fabric. It is all raised on a platform 7 ft (2.1 m). high and encircled by a stone balustrade.

Facing the main entrance is a small open shrine, consisting of a cornice and dome upheld by four pillars. The cathedral is faced with pale grey limestone, easily chiselled but hardening on exposure. The interior is of brick, plastered and decorated with fresco
Fresco
Fresco is any of several related mural painting types, executed on plaster on walls or ceilings. The word fresco comes from the Greek word affresca which derives from the Latin word for "fresh". Frescoes first developed in the ancient world and continued to be popular through the Renaissance...
es. Close by stands a large royal palace, Moorish in style. The archives of the cathedral were plundered by Hungarians
Hungary
Hungary , officially the Republic of Hungary , is a landlocked country in Central Europe. It is situated in the Carpathian Basin and is bordered by Slovakia to the north, Ukraine and Romania to the east, Serbia and Croatia to the south, Slovenia to the southwest and Austria to the west. The...
and Turks
Ottoman Empire
The Ottoman EmpireIt was usually referred to as the "Ottoman Empire", the "Turkish Empire", the "Ottoman Caliphate" or more commonly "Turkey" by its contemporaries...
, but several inscriptions, Greek, Slav and Roman, are left.

One tablet records that the founder was Prince Neagoe Basarab
Neagoe Basarab
Neagoe Basarab was the Voivode of Wallachia between 1512 and 1521. Born into the boyar family of the Craioveşti as the son of Pârvu Craiovescu or Basarab Ţepeluş cel Tânăr, Neagoe Basarab, who replaced Vlad cel Tânăr after the latter rejected Craioveşti tutelage, was noted for his abilities and...
(1512-1521); another that Prince Ioan Radu completed the work in 1526; a third describes the repairs executed in 1681 by Prince Șerban Cantacuzino
Serban Cantacuzino
Șerban Cantacuzino was a Prince of Wallachia between 1678 and 1688.He took part in the Ottoman campaign ending in their defeat at the Battle of Vienna...
; a fourth, the restoration, in 1804, by Joseph, the first bishop. Between 1875 and 1885 the cathedral was reconstructed, and in 1886 it was reconsecrated.

Its legends have inspired many Romanian poets, among them the celebrated Vasile Alecsandri
Vasile Alecsandri
Vasile Alecsandri was a Romanian poet, playwright, politician, and diplomat. He collected Romanian folk songs and was one of the principal animators of the 19th century movement for Romanian cultural identity and union of Moldavia and Wallachia....
. One tradition describes how Neagoe Basarab, while a hostage in Constantinople
Constantinople
Constantinople was the capital of the Roman, Eastern Roman, Byzantine, Latin, and Ottoman Empires. Throughout most of the Middle Ages, Constantinople was Europe's largest and wealthiest city.-Names:...
, designed a splendid mosque for the sultan, returning to build the cathedral out of the surplus materials.

Another version has Radu Negru
Radu Negru
Radu Negru also known as Radu Vodă , Radu Negru, or Negru Vodă, was a legendary ruler of Wallachia....
employing one Meşterul Manole
Mesterul Manole
In Romanian mythology, Meșterul Manole was the chief architect of the Curtea de Argeș Monastery in Wallachia...
or Manoli as architect. Manole being unable to finish the walls, the prince threatened him and his assistants with death. At last Manole suggested that they should follow the ancient custom of placing a living woman into the foundations; and that she who first appeared on the following morning should be the victim. The other masons warned their families, and Manole was forced to sacrifice his own wife. Thus the cathedral was built. When Manole and his masons told the prince that they could always build an even greater building, Radu Negru had them stranded on the roof so that they could not build something to match it. They fashioned wooden wings and tried to fly off the roof, but, one by one, they all fell to the ground. A spring of clear water, named after Manole, is said to mark the spot where he fell. This motif is widespread in South-East Europe, most notably also in Russia
Russia
Russia or , officially known as both Russia and the Russian Federation , is a country in northern Eurasia. It is a federal semi-presidential republic, comprising 83 federal subjects...
, like the blinding of the Masons of Saint Basil's Cathedral
Saint Basil's Cathedral
The Cathedral of the Protection of Most Holy Theotokos on the Moat , popularly known as Saint Basil's Cathedral , is a Russian Orthodox church erected on the Red Square in Moscow in 1555–61. Built on the order of Ivan the Terrible to commemorate the capture of Kazan and Astrakhan, it marks the...
by Ivan the Terrible.