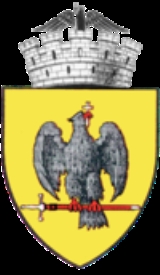 Encyclopedia
Curtea de Argeș (ˌkurte̯a de ˈard͡ʒeʃ) is a city in Romania
Romania
Romania is a country located at the crossroads of Central and Southeastern Europe, on the Lower Danube, within and outside the Carpathian arch, bordering on the Black Sea...
on the right bank of the Argeş River
Arges River
Argeș is a river of Southern Romania. It starts at the junction of headwaters Buda and Capra in the Făgăraș Mountains, in the Southern Carpathians and flows into the Danube at Oltenița.The main city on the Argeş is Piteşti...
, where it flows through a valley of the lower Carpathians
Carpathian Mountains
The Carpathian Mountains or Carpathians are a range of mountains forming an arc roughly long across Central and Eastern Europe, making them the second-longest mountain range in Europe...
(the Făgăraş Mountains
Fagaras Mountains
Făgăraș Mountains , are the highest mountains of the Southern Carpathians, in Romania. The highest peaks are Moldoveanu , Negoiu , Viștea Mare , Lespezi , Vânătoarea lui Buteanu , and Dara .They are bordered in the north by the Făgăraș Depression, through which the Olt river flows, and in the west...
), on the railway from Pitești
Pitesti
Pitești is a city in Romania, located on the Argeș River. The capital and largest city of Argeș County, it is an important commercial and industrial center, as well as the home of two universities. Pitești is situated on the A1 freeway connecting it directly to the national capital Bucharest,...
to the Turnu Roşu Pass
Turnu Rosu Pass
Turnu Roşu Pass is a mountain pass in the Romanian Carpathians, connecting Vâlcea county and Sibiu county . It is formed by the Olt River flowing southwards from Transylvania to Wallachia through the Southern Carpathians....
. It is part of Argeș County
Arges County
Argeș is a county of Romania, in Wallachia, with the capital city at Pitești.-Demographics:In 2002, it had a population of 652,625 and the population density was 95/km².*Romanians – 96%*Roma , and other.-Geography:...
. The city administers one village, Noapteș. On July 7th, 1947 in Curtea de Argeș rainfall total was 205,7 mm (8,10 in.) in just 20 minutes, which is the world record.

According to tradition it was founded early in the 13th century by Radu Vodă (or Radu Negru
Radu Negru
Radu Negru also known as Radu Vodă , Radu Negru, or Negru Vodă, was a legendary ruler of Wallachia....
), succeeding Câmpulung
Câmpulung
Câmpulung , or Câmpulung Muscel, is a city in the Argeş County, Wallachia, Romania. It is situated among the outlying hills of the Transylvanian Alps, at the head of a long well-wooded glen traversed by the Râul Târgului, a tributary of the Argeş.Its pure air and fine scenery render Câmpulung a...
as the capital of Wallachia
Wallachia
Wallachia or Walachia is a historical and geographical region of Romania. It is situated north of the Danube and south of the Southern Carpathians...
; hence its name (The Court upon Arges).

The city is the site of couple medieval churches (among them the Curtea de Argeş Cathedral
Curtea de Arges Cathedral
The Cathedral of Curtea de Argeș is a church in Curtea de Argeș, Romania, located in the grounds of a monastery. It is dedicated to Saint Nicholas....
) having been a bishopric
Diocese
A diocese is the district or see under the supervision of a bishop. It is divided into parishes.An archdiocese is more significant than a diocese. An archdiocese is presided over by an archbishop whose see may have or had importance due to size or historical significance...
since the close of the 18th century.

The most important church is the Biserica Domnească (Royal Church) built by Basarab I
Basarab I of Wallachia
Basarab I the Founder was voivode or prince of Wallachia . His rise seems to have taken place in the context of the war between the Kingdom of Hungary and the Orthodox states in the north of the Balkan Peninsula...
, completely renovated in 2003-2004. It resembles a stone fortress, connected through catacombs to a guard tower on a nearby hill. Ruins of the Prince's Palace Complex are still visible. It is mentioned in Alexandru Odobescu
Alexandru Odobescu
Alexandru Ioan Odobescu was a Romanian author, archaeologist and politician.-Biography:He was born in Bucharest, the second child of General Ioan Odobescu and his wife Ecaterina. After attending Saint Sava College and, from 1850, a Paris lycée, he took the baccalauréat in 1853 and studied...
's Doamna Chiajna.
One of the most enduring and famous Romanian legends, the legend of Meşterul Manole
Mesterul Manole
In Romanian mythology, Meșterul Manole was the chief architect of the Curtea de Argeș Monastery in Wallachia...
, is related to the monastery's construction.