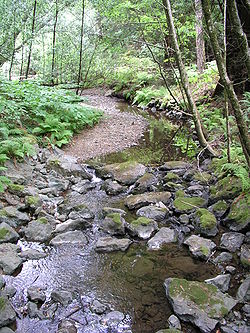 A current, in a river
River
A river is a natural watercourse, usually freshwater, flowing towards an ocean, a lake, a sea, or another river. In a few cases, a river simply flows into the ground or dries up completely before reaching another body of water. Small rivers may also be called by several other names, including...
or stream
Stream
A stream is a body of water with a current, confined within a bed and stream banks. Depending on its locale or certain characteristics, a stream may be referred to as a branch, brook, beck, burn, creek, "crick", gill , kill, lick, rill, river, syke, bayou, rivulet, streamage, wash, run or...
, is the flow of water
Water
Water is a chemical substance with the chemical formula H2O. A water molecule contains one oxygen and two hydrogen atoms connected by covalent bonds. Water is a liquid at ambient conditions, but it often co-exists on Earth with its solid state, ice, and gaseous state . Water also exists in a...
influenced by gravity as the water moves downhill
Downhill
Downhill is an alpine skiing discipline. The rules for the Downhill were originally developed by Sir Arnold Lunn for the 1921 British National Ski Championships....
to reduce its potential energy
Potential energy
In physics, potential energy is the energy stored in a body or in a system due to its position in a force field or due to its configuration. The SI unit of measure for energy and work is the Joule...
. The current varies spatially as well as temporally
Time
Time is a part of the measuring system used to sequence events, to compare the durations of events and the intervals between them, and to quantify rates of change such as the motions of objects....
within the stream, dependent upon the flow volume
Volume
Volume is the quantity of three-dimensional space enclosed by some closed boundary, for example, the space that a substance or shape occupies or contains....
of water, stream gradient
Stream gradient
Stream gradient is the grade measured by the ratio of drop in a stream per unit distance, usually expressed as feet per mile or metres per kilometre.-Hydrology and geology:A high gradient indicates a steep slope and rapid flow of water Stream gradient is the grade (slope) measured by the ratio of...
, and channel
Channel (geography)
In physical geography, a channel is the physical confine of a river, slough or ocean strait consisting of a bed and banks.A channel is also the natural or human-made deeper course through a reef, sand bar, bay, or any shallow body of water...
geometrics. In tidal zones, the current in rivers and streams may reverse on the flood tide
Flood Tide
Flood Tide is an adventure novel by Clive Cussler. This is the 14th book featuring the author’s primary protagonist, Dirk Pitt. He must rescue illegal immigrants from a Chinese tycoon and locate the bones of the Peking Man, the famous lost example of Homo erectus...
before resuming on the ebb tide
Ebb Tide
"Ebb Tide" is a popular song, written in 1953 by the lyricist Carl Sigman and composer Robert Maxwell.-Recordings:* The best-known versions are by Frank Chacksfield & His Orchestra , Vic Damone , Roy Hamilton , Frank Sinatra , The Platters , Lenny Welch and the Righteous Brothers...
.