Encyclopedia
The Cruizer class was an 18-gun class
Ship class
A ship class is a group of ships of a similar design. This is distinct from a ship-type, which might reflect a similarity of tonnage or intended use. For example, the is a nuclear aircraft carrier of the Nimitz class....
of brig-sloops of the Royal Navy
Royal Navy
The Royal Navy is the naval warfare service branch of the British Armed Forces. Founded in the 16th century, it is the oldest service branch and is known as the Senior Service...
. Brig-sloops were the same as ship-sloops except for their rigging. A ship-sloop was rigged with three masts whereas a brig-sloop was rigged as a brig
Brig
A brig is a sailing vessel with two square-rigged masts. During the Age of Sail, brigs were seen as fast and manoeuvrable and were used as both naval warships and merchant vessels. They were especially popular in the 18th and early 19th centuries...
with two masts — a fore mast and a main mast.

The Cruizer class was the most numerous class of warships built by the British during the Napoleonic wars, with 110 vessels built to this design, and the second most numerous class of sailing warship built to a single design for any navy at any time, after the smaller 10-gun Cherokee-class brig-sloops
Cherokee class brig-sloop
The Cherokee class was a 10-gun class of brig-sloops of the Royal Navy. Brig-sloops are sloops-of-war with two masts rather than the three masts of ship-sloops...
.

Of the vessels in the class, eight (8%) were lost to the enemy, either destroyed or taken. Another was taken, but retaken. Fourteen (13%) were wrecked while in British service. Lastly, four (4%) foundered while in British service. In all cases of foundering and in many cases of wrecking all the crew was lost. Many of the vessels in the class were sold, some into mercantile service. One at least was wrecked. The fate of the others is generally unknown.

In December 1796, the Navy Board
Navy Board
The Navy Board is today the body responsible for the day-to-day running of the British Royal Navy. Its composition is identical to that of the Admiralty Board of the Defence Council of the United Kingdom, except that it does not include any of Her Majesty's Ministers.From 1546 to 1831, the Navy...
placed new orders for four flush-decked sloops, to differing designs by the two Surveyors of the Navy — Sir William Rule and Sir John Henslow. In order to compare the qualities of ship-rigged and brig-rigged vessels, one vessel to each design was to be completed as a ship-sloop and the other as a brig-sloop. While the Henslow-designed vessels (the brig-sloop Busy and the ship-sloop Echo) would see no further sisters built, the Rule-designed vessels (the brig-sloop Cruizer and the ship-sloop Snake would each have a single sister ordered in the following March, and Rule's Cruizer design would subsequently see 106 constructed during the Napoleonic War. The hull design was exceeding fine (narrow as compared to length), a noted deadrise amidships, and a sharp scheer, giving away the design that had origins in the smaller cutter-type designs.

The Cruizer-class brig-sloops proved to be fast sailers and seaworthy, and the 32-pounder carronade armament gave them enormous short-range firepower, exceeding the nominal broadside of a standard 36-gun 18-pounder frigate. To a Royal Navy increasingly desperate for manpower, the great attraction of the design was that — thanks to the two-masted rig and the use of carronades with their small gun crews — this firepower could be delivered by a crew only a third the size of a frigate's. The Dutch built three 18 gun-brigs — Zwaluw, Mercuur and Kemphaan — to a similar design; in one case apparently a copy, though without the square tuck stern. The Russian brig Olymp was also built to the same lines.

The naval historian C.S. Forester commented in relation to the smaller gun-brigs (brig-rigged vessels of under 200 tons) that


The type was a necessary one but represented the inevitable unsatisfactory compromise when a vessel has to be designed to fight, to be seaworthy and to have a long endurance, all on a minimum displacement and at minimum expense. Few men in the Royal Navy had a good word to say for the gun-brigs, which rolled terribly and were greatly over-crowded, but they had to be employed.

It should be noted that later in the same book he was more complementary as regards the larger brigs such as the Cruizer class HMS Penguin
HMS Penguin (1813)
HMS Penguin was a Royal Navy Cruizer-class brig-sloop launched in 1813. In 1815 the USS Hornet captured Penguin in a battle that took place after the end of the War of 1812. Hornet then scuttled Penguin as she was too damaged to merit keeping.-Service:Penguin was commissioned in November 1813 under...
.

Perhaps the most salient aspect of his statement is that the Cruizer-class and it's smaller sister class, the Cherokee class, highlight the huge expansion of the Royal Navy. Whatever else one may say of the class, the Cruizer-class brig-sloops were both fast and provided serious firepower for minimal crewing, characteristics that appealed to a Navy suffering serious and ever increasing staffing shortages. The class proved to be ideal for many of the shallow water commitments in the Baltic and Ionian Seas, as well as around Danish waters.

During the Anglo-American War of 1812
War of 1812
The War of 1812 was a military conflict fought between the forces of the United States of America and those of the British Empire. The Americans declared war in 1812 for several reasons, including trade restrictions because of Britain's ongoing war with France, impressment of American merchant...
, several of the class fell victim to larger American ship-rigged sloops of war of nominally the same class. The American vessels enjoyed an advantage in weight of broadside and number of crew. The ship-rigged sloops enjoyed the ability to back sail, and their rigging proved more resistant to damage; by contrast, a single hit to the brig-sloop's rig could render it unmanageable. In many cases, however, the American advantage was in the quality of their crews, as the American sloops generally had hand-picked volunteer crews, while the brigs belonging to the overstretched Royal Navy had to make do with crews filled out with landsmen picked up by the press gang
Impressment
Impressment, colloquially, "the Press", was the act of taking men into a navy by force and without notice. It was used by the Royal Navy, beginning in 1664 and during the 18th and early 19th centuries, in wartime, as a means of crewing warships, although legal sanction for the practice goes back to...
.

The comparison was made in the London press unfavorably and was not entirely fair. The American ship-rigged sloops were bigger vessels, averaging just over 500 tons (bm); the Cruizer-class vessels were not quite 400 tons (bm). The crew sizes were disproportionate at 175 to 120, and at least some of the Cruizer-class in these combats were outfitted with 24-pounder carronades vice the normal 32-pounders. The rigging was often the deciding factor as the USS Peacock vs. HMS Epervier combat would highlight. When HSM Espeigle lost her main topmast and had her foremast damaged she was disabled. USS Wasp, in another combat, would retain control despite the loss of her gaff, main topmast, and the mizzen topgallant. USS Wasp vs. HMS Avon provides another example. Despite being fought gallantly, Avon was crippled by loss of a gaff. She then lost her main mast, which loss rendered her immobile. The Cyrus-class
Cyrus class post ship
The Cyrus-class sixth rates of the Royal Navy were a series of sixteen post ships built to an 1812 design by Sir William Rule, the Surveyor of the Navy. The first nine ships of the class were launched in 1813 and the remaining seven in 1814. The vessels of the class served at the end of the...
vessels, built in 1813-1814, were intended as an answer to the American ship-rigged sloops.

The following table lists the Cruizer-class brig-sloops by the date on which the Admiralty ordered them. 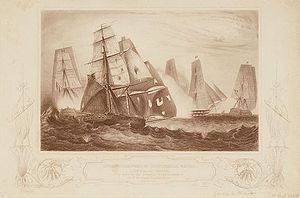 The Board ordered ordered six vessels to this design during May 1804, all of fir. Building of fir (pine) made for speedier construction at the cost of reduced durability in service.

The Board ordered 22 vessels to this design, seventeen of which were launched in 1806 and five in 1807.

The Board ordered 20, of which only eighteen were built; two were cancelled.