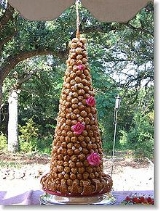 Encyclopedia
A croquembouche or croque-en-bouche is a French
French cuisine
French cuisine is a style of food preparation originating from France that has developed from centuries of social change. In the Middle Ages, Guillaume Tirel , a court chef, authored Le Viandier, one of the earliest recipe collections of Medieval France...
pastry
Pastry
Pastry is the name given to various kinds of baked products made from ingredients such as flour, sugar, milk, butter, shortening, baking powder and/or eggs. Small cakes, tarts and other sweet baked products are called "pastries."...
, a pièce montée
Pièce montée
A pièce montée is a kind of decorative confectionery centerpiece in an architectural or sculptural form used for formal banquets and made of materials such as confectioner's paste, nougat, marzipan, and spun sugar. Although the ingredients are typically edible, their purpose is purely decorative,...
that is often served at weddings, baptisms, and first communions. It is a high cone of choux
Choux pastry
Choux pastry, or pâte à choux , is a light pastry dough used to make profiteroles, croquembouches, éclairs, French crullers, beignets, St. Honoré cake, Indonesian kue sus, and gougères. It contains only butter, water, flour, and eggs...
filled with pastry cream that can be dipped in chocolate bound with caramel
Caramel
Caramel is a beige to dark-brown confection made by heating any of a variety of sugars. It is used as a flavoring in puddings and desserts, as a filling in bonbons, and as a topping for ice cream, custard and coffee....
, and usually decorated with threads of caramel, sugared almonds, chocolate, flowers, or ribbons. They are also often covered in macaron
Macaron
A macaron is a sweet confectionery made with egg whites, icing sugar, granulated sugar, almond powder or ground almond, and food coloring. The macaron is commonly filled with buttercream or jam filling sandwiched between two cookies. Its name is derived from an Italian word "maccarone" or...
s, a small pastry consisting of two layers and a flavored cream or ganache
Ganache
Ganache is a glaze, icing, or filling for pastries made from chocolate and cream.Ganache is normally made by heating cream, then pouring it over chopped dark semi-sweet chocolate...
.

The name comes from the French
French language
French is a Romance language spoken as a first language in France, the Romandy region in Switzerland, Wallonia and Brussels in Belgium, Monaco, the regions of Quebec and Acadia in Canada, and by various communities elsewhere. Second-language speakers of French are distributed throughout many parts...
words croque en bouche meaning 'crunch in the mouth'.