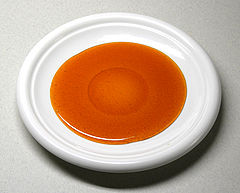 Caramel is a beige
Beige
Beige may be described as an off tan color or an extremely pale brown color.The term originates from beige cloth, a cotton fabric left undyed in its natural color...
to dark-brown confection
Confectionery
Confectionery is the set of food items that are rich in sugar, any one or type of which is called a confection. Modern usage may include substances rich in artificial sweeteners as well...
made by heating any of a variety of sugars. It is used as a flavoring in pudding
Pudding
Pudding most often refers to a dessert, but it can also be a savory dish.In the United States, pudding characteristically denotes a sweet milk-based dessert similar in consistency to egg-based custards, though it may also refer to other types such as bread and rice pudding.In the United Kingdom and...
s and dessert
Dessert
In cultures around the world, dessert is a course that typically comes at the end of a meal, usually consisting of sweet food. The word comes from the French language as dessert and this from Old French desservir, "to clear the table" and "to serve." Common Western desserts include cakes, biscuits,...
s, as a filling in bonbon
Bonbon
The name bonbon refers to any of several types of sweets, especially small candies enrobed in chocolate.The first reports of bonbons come from the 17th century, when they were made at the French royal court. Their name arose from infantile reduplication of the word bon, meaning 'good'...
s, and as a topping for ice cream
Ice cream
Ice cream is a frozen dessert usually made from dairy products, such as milk and cream, and often combined with fruits or other ingredients and flavours. Most varieties contain sugar, although some are made with other sweeteners...
, custard
Custard
Custard is a variety of culinary preparations based on a cooked mixture of milk or cream and egg yolk. Depending on how much egg or thickener is used, custard may vary in consistency from a thin pouring sauce , to a thick pastry cream used to fill éclairs. The most common custards are used as...
and coffee
Coffee
Coffee is a brewed beverage with a dark,init brooo acidic flavor prepared from the roasted seeds of the coffee plant, colloquially called coffee beans. The beans are found in coffee cherries, which grow on trees cultivated in over 70 countries, primarily in equatorial Latin America, Southeast Asia,...
.

The process of caramelization
Caramelization
Caramelization is the browning of sugar, a process used extensively in cooking for the resulting nutty flavor and brown color. As the process occurs, volatile chemicals are released, producing the characteristic caramel flavor....
consists of heating sugar slowly to around 170 °C. As the sugar heats, the molecules break down and re-form into compounds with a characteristic color and flavor.

A variety of candies
Candy
Candy, specifically sugar candy, is a confection made from a concentrated solution of sugar in water, to which flavorings and colorants are added...
, confections
Confectionery
Confectionery is the set of food items that are rich in sugar, any one or type of which is called a confection. Modern usage may include substances rich in artificial sweeteners as well...
, and dessert
Dessert
In cultures around the world, dessert is a course that typically comes at the end of a meal, usually consisting of sweet food. The word comes from the French language as dessert and this from Old French desservir, "to clear the table" and "to serve." Common Western desserts include cakes, biscuits,...
s are made with caramel: caramel apples, praline
Praline
Praline is a family of confections made from nuts and sugar syrup.-Europe:As originally inspired in France at the Château of Vaux-le-Vicomte by the cook of the 17th-century sugar industrialist Marshal du Plessis-Praslin , early pralines were whole almonds individually coated in caramelized sugar,...
s, nougat
Nougat
Nougat is a variety of similar traditional confectioneries made with sugar and/or honey, roasted nuts , and sometimes chopped candied fruit. The consistency of nougat can range from soft and chewy to hard and crunchy depending on its composition, and it is used in a variety of candy bars and...
s, brittle
Brittle (food)
Brittle is a type of confection, consisting of flat broken pieces of hard sugar candy embedded with nuts such as pecans, almonds, or peanuts....
s, crème caramel, and crème brûlée
Crème brûlée
Crème brûlée , also known as burnt cream, crema catalana, or Trinity cream is a dessert consisting of a rich custard base topped with a contrasting layer of hard caramel...
.

Most linguists trace the origin of the word to Medieval Latin "cannamellis" (sugar cane) or to Latin "callamellus" (little reed, referring to sugar cane).


Caramel candy is a soft, dense, chewy candy made by boiling a mixture of milk or cream, sugar(s), butter, and vanilla flavoring.

The sugar(s) are heated separately to reach 170 °C, caramelizing them before the other ingredients are added. Alternatively, all ingredients may be cooked together; in this procedure, the mixture is not heated above the firm ball stage (120 °C), so there is caramelization of the milk but not of the sugars. This type of candy is often called milk caramel or cream caramel.

Caramel coloring is a dark, bitter-tasting liquid. It is the highly concentrated product of near total caramelization, bottled for commercial use. It is used as food coloring
Food coloring
Food coloring is a substance, liquid or powder, that is added to food or drink to change its color. Food coloring is used both in commercial food production and in domestic cooking...
and in beverages such as cola
Cola
Cola is a carbonated beverage that was typically flavored by the kola nut as well as vanilla and other flavorings, however, some colas are now flavored artificially. It became popular worldwide after druggist John Pemberton invented Coca-Cola in 1886...
.

Caramelization is the removal of water from a sugar, proceeding to isomerization and polymerization
Polymerization
In polymer chemistry, polymerization is a process of reacting monomer molecules together in a chemical reaction to form three-dimensional networks or polymer chains...
of the sugars into various high-weight compounds. Compounds such as difructose
Fructose
Fructose, or fruit sugar, is a simple monosaccharide found in many plants. It is one of the three dietary monosaccharides, along with glucose and galactose, that are absorbed directly into the bloodstream during digestion. Fructose was discovered by French chemist Augustin-Pierre Dubrunfaut in 1847...
anhydride may be created from the monosaccharide
Monosaccharide
Monosaccharides are the most basic units of biologically important carbohydrates. They are the simplest form of sugar and are usually colorless, water-soluble, crystalline solids. Some monosaccharides have a sweet taste. Examples of monosaccharides include glucose , fructose , galactose, xylose...
s after water loss. Fragmentation reactions result in low-molecular-weight compounds that may be volatile and may contribute to flavor. Polymerization reactions lead to larger-molecular-weight compounds that contribute to the dark-brown color.

In modern recipes and in commercial production, glucose
Glucose
Glucose is a simple sugar and an important carbohydrate in biology. Cells use it as the primary source of energy and a metabolic intermediate...
(from corn syrup
Corn syrup
Corn syrup is a food syrup, which is made from the starch of maize and contains varying amounts of maltose and higher oligosaccharides, depending on the grade. Corn syrup is used in foods to soften texture, add volume, prevent crystallization of sugar, and enhance flavor...
or wheat
Wheat
Wheat is a cereal grain, originally from the Levant region of the Near East, but now cultivated worldwide. In 2007 world production of wheat was 607 million tons, making it the third most-produced cereal after maize and rice...
) or invert sugar
Inverted sugar syrup
Inverted or invert sugar syrup is a mixture of glucose and fructose; it is obtained by splitting sucrose into these two components. Compared with its precursor, sucrose, inverted sugar is sweeter and its products tend to remain more moist and are less prone to crystallisation...
is added to prevent crystallization, making up 10%–50% of the sugars by mass. It should be noted that "wet caramels" (made by heating sucrose and water instead of sucrose alone) produce their own invert sugar due to thermal reaction, but not necessarily enough to prevent crystallization in traditional recipes.