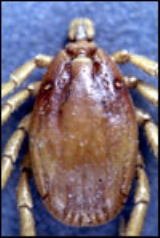 Overview
Crimean–Congo hemorrhagic fever (CCHF) is a widespread tick
Tick
Ticks are small arachnids in the order Ixodida, along with mites, constitute the subclass Acarina. Ticks are ectoparasites , living by hematophagy on the blood of mammals, birds, and sometimes reptiles and amphibians...
-borne viral disease, a zoonosis
Zoonosis
A zoonosis or zoonoseis any infectious disease that can be transmitted from non-human animals to humans or from humans to non-human animals . In a study of 1415 pathogens known to affect humans, 61% were zoonotic...
of domestic animal
Animal
Animals are a major group of multicellular, eukaryotic organisms of the kingdom Animalia or Metazoa. Their body plan eventually becomes fixed as they develop, although some undergo a process of metamorphosis later on in their life. Most animals are motile, meaning they can move spontaneously and...
s and wild animals
Wildlife
Wildlife includes all non-domesticated plants, animals and other organisms. Domesticating wild plant and animal species for human benefit has occurred many times all over the planet, and has a major impact on the environment, both positive and negative....
, that may affect humans. The pathogen
Pathogen
A pathogen gignomai "I give birth to") or infectious agent — colloquially, a germ — is a microbe or microorganism such as a virus, bacterium, prion, or fungus that causes disease in its animal or plant host...
ic virus, especially common in East
East Africa
East Africa or Eastern Africa is the easterly region of the African continent, variably defined by geography or geopolitics. In the UN scheme of geographic regions, 19 territories constitute Eastern Africa:...
and West Africa
West Africa
West Africa or Western Africa is the westernmost region of the African continent. Geopolitically, the UN definition of Western Africa includes the following 16 countries and an area of approximately 5 million square km:-Flags of West Africa:...
, is a member of the Bunyaviridae
Bunyaviridae
Bunyaviridae is a family of negative-stranded RNA viruses. Though generally found in arthropods or rodents, certain viruses in this family occasionally infect humans. Some of them also infect plants....
family of RNA virus
RNA virus
An RNA virus is a virus that has RNA as its genetic material. This nucleic acid is usually single-stranded RNA but may be double-stranded RNA...
es. Clinical disease
Disease
A disease is an abnormal condition affecting the body of an organism. It is often construed to be a medical condition associated with specific symptoms and signs. It may be caused by external factors, such as infectious disease, or it may be caused by internal dysfunctions, such as autoimmune...
is rare in infected
Infection
An infection is the colonization of a host organism by parasite species. Infecting parasites seek to use the host's resources to reproduce, often resulting in disease...
mammal
Mammal
Mammals are members of a class of air-breathing vertebrate animals characterised by the possession of endothermy, hair, three middle ear bones, and mammary glands functional in mothers with young...
s, but commonly severe in infected human
Human
Humans are the only living species in the Homo genus...
s, with a 30% mortality rate
Mortality rate
Mortality rate is a measure of the number of deaths in a population, scaled to the size of that population, per unit time...
. Outbreak
Outbreak
Outbreak is a term used in epidemiology to describe an occurrence of disease greater than would otherwise be expected at a particular time and place. It may affect a small and localized group or impact upon thousands of people across an entire continent. Two linked cases of a rare infectious...
s of illness are usually attributable to handling infected animals or people.
Typically, after a 1–3 day incubation period
Incubation period
Incubation period is the time elapsed between exposure to a pathogenic organism, a chemical or radiation, and when symptoms and signs are first apparent...
following a tick bite (5–6 days after exposure to infected blood or tissues), flu
Influenza
Influenza, commonly referred to as the flu, is an infectious disease caused by RNA viruses of the family Orthomyxoviridae , that affects birds and mammals...
-like symptoms appear, which may resolve after one week.

What are the structural adaptions that this virus has undergone? Also, I'd like to know about it's descriptive evolution over time.
More
x