Encyclopedia
A crayfish party is a traditional summertime eating and drinking celebration in the Nordic countries
Nordic countries
The Nordic countries make up a region in Northern Europe and the North Atlantic which consists of Denmark, Finland, Iceland, Norway and Sweden and their associated territories, the Faroe Islands, Greenland and Åland...
. The tradition originated in Sweden
Sweden
Sweden , officially the Kingdom of Sweden , is a Nordic country on the Scandinavian Peninsula in Northern Europe. Sweden borders with Norway and Finland and is connected to Denmark by a bridge-tunnel across the Öresund....
, where a crayfish party is called a kräftskiva. The tradition has also spread to Finland
Finland
Finland , officially the Republic of Finland, is a Nordic country situated in the Fennoscandian region of Northern Europe. It is bordered by Sweden in the west, Norway in the north and Russia in the east, while Estonia lies to its south across the Gulf of Finland.Around 5.4 million people reside...
via the Swedish-speaking population of that country.

Crayfish parties are generally held during August, a tradition that started because crayfish
Crayfish
Crayfish, crawfish, or crawdads – members of the superfamilies Astacoidea and Parastacoidea – are freshwater crustaceans resembling small lobsters, to which they are related...
harvesting in Sweden was, for most of the 20th century, legally limited to late summer. Today, the “kräftpremiär” date in early August has no legal significance. Dining is traditionally outdoors, but in practice the party is often driven indoors by bad weather or aggressive mosquito
Mosquito
Mosquitoes are members of a family of nematocerid flies: the Culicidae . The word Mosquito is from the Spanish and Portuguese for little fly...
es. Customary party accessories are comical paper hats, paper tablecloths, paper lanterns (often depicting the Man in the Moon
Man in the Moon
The Man in the Moon is an imaginary figure resembling a human face, head or body, that observers from some cultural backgrounds typically perceive in the bright disc of the full moon...
), and bibs. A rowdy atmosphere prevails amid noisy eating and traditional drinking songs (snapsvisa
Snapsvisa
A snapsvisa is a traditional Scandinavian drinking song which is often sung before drinking a small shot of spirit that is called a snaps....
). The alcohol consumption is often high, especially when compared to the amount of food actually eaten (crayfish shelling is tedious work).

It is culturally correct to suck the juice out of the crayfish before shelling it.

On the Swedish west coast it is common to replace the fresh water crayfish with havskräfta (English: Norway lobster
Norway lobster
Nephrops norvegicus, known variously as the Norway lobster, Dublin Bay prawn, or scampi, is a slim, orange-pink lobster which grows up to long, and is "the most important commercial crustacean in Europe"...
).

Akvavit
Akvavit
Akvavit or aquavit is a traditional flavoured spirit that is principally produced in Scandinavia, where it has been produced since the 15th century....
and other kinds of snaps
Snaps
Snaps is a Danish and Swedish word for a small shot of a strong alcoholic beverage taken during the course of a meal. A ritual that is associated with drinking snaps is a tradition in Scandinavia, especially in Denmark and Sweden, where it is very common to drink snaps at holidays such as...
are served, as well as beer
Beer
Beer is the world's most widely consumed andprobably oldest alcoholic beverage; it is the third most popular drink overall, after water and tea. It is produced by the brewing and fermentation of sugars, mainly derived from malted cereal grains, most commonly malted barley and malted wheat...
.
The crayfish are boiled in salt water and seasoned with fresh dill
Dill
Dill is a perennial herb. It is the sole species of the genus Anethum, though classified by some botanists in a related genus as Peucedanum graveolens C.B.Clarke.-Growth:...
— preferably “crown dill” harvested after the plant has flowered — then served cold and eaten with one’s fingers. Bread
Bread
Bread is a staple food prepared by cooking a dough of flour and water and often additional ingredients. Doughs are usually baked, but in some cuisines breads are steamed , fried , or baked on an unoiled frying pan . It may be leavened or unleavened...
, mushroom
Mushroom
A mushroom is the fleshy, spore-bearing fruiting body of a fungus, typically produced above ground on soil or on its food source. The standard for the name "mushroom" is the cultivated white button mushroom, Agaricus bisporus; hence the word "mushroom" is most often applied to those fungi that...
pies, strong Västerbotten cheese
Västerbotten cheese
Västerbotten cheese is a cheese from the Västerbotten region of Sweden. It is a hard cow's milk cheese with tiny eyes or holes and a firm and granular texture. As in Cheddar cheese, the curd is heated, cut, and stirred before the cheese is moulded and aged...
, salads, and other dishes are served buffet-style. 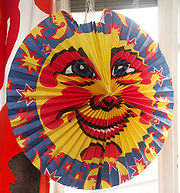