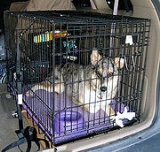 Encyclopedia
Crate training is the process of teaching a pet
Pet
A pet is a household animal kept for companionship and a person's enjoyment, as opposed to wild animals or to livestock, laboratory animals, working animals or sport animals, which are kept for economic or productive reasons. The most popular pets are noted for their loyal or playful...
to accept a crate
Crate
A crate is a large shipping container, often made of wood, typically used to transport large, heavy or awkward items. A crate has a self-supporting structure, with or without sheathing. For a wooden container to be a crate, all six of its sides must be put in place to result in the rated strength...
or cage
Cage (enclosure)
A cage is an enclosure made of mesh, bars or wires, used to confine, contain or protect something or someone. A cage can serve many purposes, including keeping an animal in captivity, capturing, and being used for display of an animal at a zoo.-History:...
as a familiar and safe location. Advocates claim that dog
Dog
The domestic dog is a domesticated form of the gray wolf, a member of the Canidae family of the order Carnivora. The term is used for both feral and pet varieties. The dog may have been the first animal to be domesticated, and has been the most widely kept working, hunting, and companion animal in...
s are den
Den
Den may refer to:*Den , a part of a house similar to the living room: a den is about the size of a living room, but smaller than a family room*Den , a Ukrainian newspaper*Den , a Pharaoh of Egypt...
-dwelling animals and that a crate can become a den substitute. Proponents also advocate crate training so that cats as well as dogs can be safely transported to veterinary appointments and have a safe place to stay should they and their family be evacuated due to a disaster. 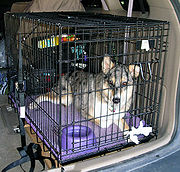 Crate training is often practiced with new puppies as a method of house-training. Puppies naturally do not want to dirty the place where they sleep, so they will try as much as possible to hold it while they are in their crate. Of course, young puppies can not control their bladders for long: about one hour for every month of age. Owners of young dogs will have to continue to take the puppy outside frequently.

Crate training is the process by which a domestic pet becomes accustomed to and eventually accepts a crate. This can involve making a crate an inviting place by placing small familiar toys inside, moving the pet bed into crate, leaving unwashed items of the owner's clothing inside, rewarding pets for entering the crate and remaining inside, incorporating the crate as part of play, feeding the pet in the crate, allowing the pet to explore and use the crate until it is no longer intimidating, and eventually building to the pet sleeping in the crate overnight.

Part of proper crate or cage training requires the pet owner to observe calm and relaxed behaviour around the crate. The pet will attribute any emotional responses such as raised voices or other nervous behaviours to the foreign object in their normal environment. It is important for the owner not to create any negative associations with the cage in order for the pet to accept the crate in a calm manner.

It is important to pick a crate that is the correct size for the pet and is appropriate for its purpose. Often larger crates come with some sort of divider so that a crate can grow with the pet. The correct size for a crate is just enough room for the animal to stand up and turn around. A cage for use at home can be larger than one used for travel. Crates used for international transport should adhere to international regulations stipulated by IATA http://www.iata.org/whatwedo/cargo/live_animals/pets.htm. If the crate is too big the pet may be inclined to defecate at one end and sleep in the other, which undermines one of the purposes of crate training. During air travel, an oversized cage does not permit the pet to use the sides easily as a brace during turbulence. Likewise, crates that are too small pose a health risk by restricting and preventing proper air-flow and ventilation. This is of particular concern to domestic pets of a Brachycephalic breed require extra room due to the high incidence of death in these pet transports. Due to their shortened airways and limited ability to cool themselves through panting, overheating while traveling poses a risk to the health of such breeds. 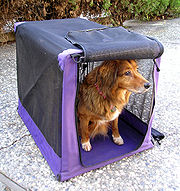 Crates are not universally accepted as a positive method of dog training. Steven Lindsay, in his Handbook of Applied Dog Behavior and Training compares a dog’s attachment to a crate with the Stockholm Syndrome
Stockholm syndrome
In psychology, Stockholm Syndrome is an apparently paradoxical psychological phenomenon wherein hostages express empathy and have positive feelings towards their captors, sometimes to the point of defending them...
.
The source of this article is wikipedia, the free encyclopedia.  The text of this article is licensed under the GFDL.