Encyclopedia
A crash cymbal is a type of cymbal
Cymbal
Cymbals are a common percussion instrument. Cymbals consist of thin, normally round plates of various alloys; see cymbal making for a discussion of their manufacture. The greater majority of cymbals are of indefinite pitch, although small disc-shaped cymbals based on ancient designs sound a...
that produces a loud, sharp "crash" and is used mainly for occasional accents, as opposed to in ostinato
Ostinato
In music, an ostinato is a motif or phrase, which is persistently repeated in the same musical voice. An ostinato is always a succession of equal sounds, wherein each note always has the same weight or stress. The repeating idea may be a rhythmic pattern, part of a tune, or a complete melody in...
. The term "crash" may have been first used by Zildjian in 1928.
They can be mounted on a stand and played with a drum stick
Drum stick
A percussion mallet is an object used to beat drums and other percussion instruments. Some specialized mallets are called beaters, drumsticks.Note: See Rute .-Drum sticks:...
, or by hand in pairs
Clash cymbals
Clash cymbals or hand cymbals are cymbals played in identical pairs by holding one cymbal in each hand and striking the two together.-Terminology:The technical term clash cymbal is rarely used...
. One or two crash cymbals are a standard part of a drum kit
Drum kit
A drum kit is a collection of drums, cymbals and often other percussion instruments, such as cowbells, wood blocks, triangles, chimes, or tambourines, arranged for convenient playing by a single person ....
. Suspended
Suspended cymbal
right|thumb|Classical suspended cymbalA suspended cymbal is any single cymbal played with a stick or beater rather than struck against another cymbal. A common abbreviation used is sus. cym., or sus. cymb. .-History:...
crash cymbals are also used in band
Band (music)
In music, a musical ensemble or band is a group of musicians that works together to perform music. The following articles concern types of musical bands:* All-female band* Big band* Boy band* Christian band* Church band* Concert band* Cover band...
s and orchestra
Orchestra
An orchestra is a sizable instrumental ensemble that contains sections of string, brass, woodwind, and percussion instruments. The term orchestra derives from the Greek ορχήστρα, the name for the area in front of an ancient Greek stage reserved for the Greek chorus...
s, either played with a drumstick or rolled with a pair of mallets to produce a slower, swelling crash. Sometimes a drummer may hit two different crash cymbals in a kit at the same time to produce a very loud accent, usually in rock music
Rock music
Rock music is a genre of popular music that developed during and after the 1960s, particularly in the United Kingdom and the United States. It has its roots in 1940s and 1950s rock and roll, itself heavily influenced by rhythm and blues and country music...
.

Although crash cymbals range in thickness from paper-thin to very heavy, all crash cymbals have a fairly thin edge. They are typically 14 to 18 in (35.6 to 45.7 cm) in diameter, but sizes down to 8 inches (20.3 cm) and up to 24 inches (61 cm) are manufactured. Custom crash cymbals up to 28 inches (71.1 cm) in diameter have been used by big band
Big band
A big band is a type of musical ensemble associated with jazz and the Swing Era typically consisting of rhythm, brass, and woodwind instruments totaling approximately twelve to twenty-five musicians...
s. Different thicknesses are used for different kinds of music, and the alloy for each manufacturer's models varies. A thick cymbal is likely to be used by a metal or rock band, while thinner cymbals are generally used in lighter rock.

The sound of a crash is changed by its luster. A cleaner cymbal creates a more crisp sound, whereas a cymbal showing signs of oxidation [usually called a 'raw' cymbal, when used on purpose] will have duller sound.

Crash cymbals were traditionally placed on the left side of the drum set (for a right-handed drummer), since the normally larger ride cymbal
Ride cymbal
The ride cymbal is a standard cymbal in most drum kits. It maintains a steady rhythmic pattern, sometimes called a ride pattern, rather than the accent of a crash...
is usually on the right, however some drummers set up their crash on the right. Often a drummer will have multiple crashes, and so may set them up with one or two on each side, or less commonly, with one mounted very closely above another, usually larger crash or ride. 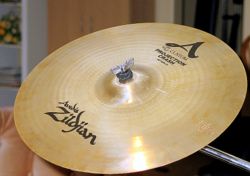 Crashes are often the first cymbal in a setup to warp and ultimately crack due to repeated striking of the edge. Cymbal cracking is generally in the form of a fracture along the edge, or across the bow, often originating from the edge. Cracks in cymbals are caused by poor technique or excessive play, or more rarely, the result of a defect originating from manufacture, or damage to the cymbal not caused by playing, for example dropping. If a crack is left untreated, it will begin to follow the lathe grooves around the cymbal, and could potentially spread all the way around the cymbal and back to the point where the crack started, causing the outer portion to simply drop off.

Some suggest that wear on the cymbal can be reduced by playing with glancing blows, angled to the side and slightly away from the vertical, about a quarter of the way between the edge and the center and allowing the drum stick to bounce off naturally, rather than forcing the stick down at the cymbal head-on. This allows the cymbal to vibrate freely and for little stress to be caused on the edge or at the center hole, thus reducing the chance of a crack.

Cracked cymbals are often fixed either temporarily or permanently by drilling a hole at either end of the crack (often the crack will spread further than it appears to the naked eye, so this method is often not as effective), or removing the cracked portion completely, or cutting the cymbal's edge down, although this method can drastically alter a cymbal's sound. Both of these methods are often ineffective at stopping cracks, but usually slow the spread of a crack down.

A pair of identical crash cymbals held in either hand by leather thongs passing through holes in their bells are called clash cymbals
Clash cymbals
Clash cymbals or hand cymbals are cymbals played in identical pairs by holding one cymbal in each hand and striking the two together.-Terminology:The technical term clash cymbal is rarely used...
, and are a standard part of an orchestra
Orchestra
An orchestra is a sizable instrumental ensemble that contains sections of string, brass, woodwind, and percussion instruments. The term orchestra derives from the Greek ορχήστρα, the name for the area in front of an ancient Greek stage reserved for the Greek chorus...
l percussion
Percussion instrument
A percussion instrument is any object which produces a sound when hit with an implement or when it is shaken, rubbed, scraped, or otherwise acted upon in a way that sets the object into vibration...
section. Two tones are normally used by major orchestras, known as Germanic or Wagnerian (heavier) and Viennese (lighter); a third, rarer tone is known as French (lighter still). Clash cymbals are also used in stage, concert, marching and military bands.