Encyclopedia
The ride cymbal is a standard cymbal
Cymbal
Cymbals are a common percussion instrument. Cymbals consist of thin, normally round plates of various alloys; see cymbal making for a discussion of their manufacture. The greater majority of cymbals are of indefinite pitch, although small disc-shaped cymbals based on ancient designs sound a...
in most drum kit
Drum kit
A drum kit is a collection of drums, cymbals and often other percussion instruments, such as cowbells, wood blocks, triangles, chimes, or tambourines, arranged for convenient playing by a single person ....
s. It maintains a steady rhythm
Rhythm
Rhythm may be generally defined as a "movement marked by the regulated succession of strong and weak elements, or of opposite or different conditions." This general meaning of regular recurrence or pattern in time may be applied to a wide variety of cyclical natural phenomena having a periodicity or...
ic pattern, sometimes called a ride pattern, rather than the accent
Accent (music)
In music, an accent is an emphasis placed on a particular note,either as a result of its context or specifically indicated by an accent mark.Accents contribute to the articulation and prosody of a performance of a musical phrase....
of a crash
Crash cymbal
A crash cymbal is a type of cymbal that produces a loud, sharp "crash" and is used mainly for occasional accents, as opposed to in ostinato. The term "crash" may have been first used by Zildjian in 1928....
. It is normally placed on the extreme right (or dominant hand) of a drum kit, above the floor tom
Floor tom
A floor tom is a double-headed tom-tom drum which usually stands on the floor on three legs. However, they can also be attached to a cymbal stand with a drum clamp....
.

The ride can fulfill any function or rhythm the hi-hat
Hi-hat
A hi-hat, or hihat, is a type of cymbal and stand used as a typical part of a drum kit by percussionists in R&B, hip-hop, disco, jazz, rock and roll, house, reggae and other forms of contemporary popular music.- Operation :...
does, with the exclusion of an open and closed sound. 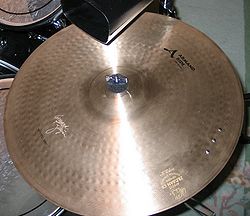 The term ride means to ride with the music, describing the cymbal's sustain after it is struck. The term may depict either the function or characteristic of the instrument. Most cymbal makers manufacture specific cymbals for the purpose.

Some drummers use a china cymbal
China cymbal
thumb|right|China type cymbals from three continentsIn western music, china type cymbals are cymbals manufactured to produce a dark, crisp, trashy, and explosive tone...
, a sizzle cymbal
Sizzle cymbal
A sizzle cymbal is a cymbal to which rivets, chains or other rattles have been added to modify the sound, attached either by means of holes bored in the cymbal or by means of an attachment known as a sizzler....
or a specialised tone such as a swish
Swish cymbal
The swish cymbal and the pang cymbal are exotic ride cymbals originally developed and named as part of the collaboration between Gene Krupa and the Avedis Zildjian Company...
or pang cymbal as a ride cymbal. When playing extremely softly, when using brushes, and when recording, even a paperthin crash may serve well as a ride cymbal.

On the other extreme, when playing extremely loudly a cymbal designed as a ride may serve well as a very loud, long crash.

Bell-less ride cymbals, known as flat ride
Flat ride (cymbal)
A flat ride is a ride cymbal without a bell, originally developed by Paiste in the 1960s. Zildjian calls their examples "Flat Top Ride." A flat ride cymbal produces the tightest, driest, most controlled stick sound of all ride cymbals, but with an airy wash. The lack of bell makes this cymbal...
s, have a dry crash and clear stick definition. Quieter, they are popular in jazz drumming. Developed by Paiste
Paiste
Paiste, a Swiss manufacturer and designer, is the world's third largest manufacturer of cymbals, gongs, and metal percussion. Paiste is an Estonian/Finnish word which means "shine"...
in the 1960s, flat rides are used by notable drummers Roy Haynes
Roy Haynes
Roy Owen Haynes is an American jazz drummer and bandleader. Haynes is among the most recorded drummers in jazz, and in a career lasting more than 60 years has played in a wide range of styles ranging from swing and bebop to jazz fusion and avant-garde jazz...
, Jack DeJohnette
Jack DeJohnette
Jack DeJohnette is an American jazz drummer, pianist, and composer. He is one of the most influential jazz drummers of the 20th century, due to extensive work as leader and sideman for musicians like Miles Davis, Joe Henderson, Freddie Hubbard, Keith Jarrett and Sonny...
, Paul Wertico
Paul Wertico
Paul Wertico is an American drummer. He gained recognition as a member of the Pat Metheny Group from 1983 until 2001, leaving the group to spend more time with his family and to pursue other musical interests. Metheny heard the Simon Bard Group with Wertico and bassist Steve Rodby, and invited...
, Carter Beauford
Carter Beauford
Carter Anthony Beauford is an American drummer, percussionist, and founding member of Dave Matthews Band. He is known for his ability to adapt to a variety of genres, and both his ambidextrous and his open hand drumming styles. He plays the drums and sings backing vocals in the band...
and Charlie Watts
Charlie Watts
Charles Robert "Charlie" Watts is an English drummer, best known as a member of The Rolling Stones. He is also the leader of a jazz band, a record producer, commercial artist, and horse breeder.-Early life:...
.

The most basic ride pattern in rock and other styles is:

When struck, a ride cymbal makes a sustained, shimmering sound rather than the shorter, decaying sound of a crash cymbal
Crash cymbal
A crash cymbal is a type of cymbal that produces a loud, sharp "crash" and is used mainly for occasional accents, as opposed to in ostinato. The term "crash" may have been first used by Zildjian in 1928....
. The most common diameter for a ride cymbal is about 20 inches (50.8 cm), but anything from 18 inches (45.7 cm) to 22 inches (55.9 cm) is standard. Smaller and thinner cymbals tend to be darker with more shimmer, while larger and thicker cymbals tend to respond better in louder volume situations, and conversely. Rides of up to 26 inches (66 cm) and down to 16 inches (40.6 cm) are readily available, and down to 8 inches (20.3 cm) are currently manufactured. The very thickest and loudest tend to be about 22 inches, with larger rides restricted to medium and medium thin thicknesses.

In rock
Rock music
Rock music is a genre of popular music that developed during and after the 1960s, particularly in the United Kingdom and the United States. It has its roots in 1940s and 1950s rock and roll, itself heavily influenced by rhythm and blues and country music...
or jazz
Jazz
Jazz is a musical style that originated at the beginning of the 20th century in African American communities in the Southern United States. It was born out of a mix of African and European music traditions. From its early development until the present, jazz has incorporated music from 19th and 20th...
, the ride cymbal is most often struck regularly in a rhythmic pattern as part of the accompaniment to the song. Often the drummer will vary between the same pattern either on the hi-hat cymbal or the ride cymbal, playing for example the hi-hat in the verses and the ride in the instrumentals and/or choruses.

The sound of a ride cymbal also varies depending on what kind of mallet is used to hit it. In rock
Rock music
Rock music is a genre of popular music that developed during and after the 1960s, particularly in the United Kingdom and the United States. It has its roots in 1940s and 1950s rock and roll, itself heavily influenced by rhythm and blues and country music...
and metal
Heavy metal music
Heavy metal is a genre of rock music that developed in the late 1960s and early 1970s, largely in the Midlands of the United Kingdom and the United States...
, wood and nylon-tipped drum sticks are common; wood creates a smoother, quieter sound, whereas nylon tips create more of a "ping." it creates a low vibration to keep a steady beat, but a low sound volume. The bell, the bulge in the center of the cymbal, creates a brighter, less sustained sound. Unique to the ride cymbal, the bell creates such a brilliant tone compared to the subtle sound of the bow that it is often used as somewhat of another cymbal. Some ride cymbals, seen more often in various forms of metal and harder sub-genres of rock, have an unusually large bell. This lessens the accuracy required to repeatedly hit the bell in fast patterns, and produces a louder, brighter tone than in most ride-cymbal bells.