Encyclopedia
Cowry, also sometimes spelled cowrie, plural cowries, is the common name
Common name
A common name of a taxon or organism is a name in general use within a community; it is often contrasted with the scientific name for the same organism...
for a group of small to large sea snail
Sea snail
Sea snail is a common name for those snails that normally live in saltwater, marine gastropod molluscs....
s, marine
Ocean
An ocean is a major body of saline water, and a principal component of the hydrosphere. Approximately 71% of the Earth's surface is covered by ocean, a continuous body of water that is customarily divided into several principal oceans and smaller seas.More than half of this area is over 3,000...
gastropod molluscs in the family Cypraeidae
Cypraeidae
Cypraeidae, common name the cowries , is a taxonomic family of small to large sea snails. These are marine gastropod mollusks in the superfamily Cypraeoidea, the cowries and cowry allies.-Shell description:...
, the cowries. The word cowry is also often used to refer only to the shell
Gastropod shell
The gastropod shell is a shell which is part of the body of a gastropod or snail, one kind of mollusc. The gastropod shell is an external skeleton or exoskeleton, which serves not only for muscle attachment, but also for protection from predators and from mechanical damage...
s of these snails, which overall are often shaped more or less like an egg
Egg (food)
Eggs are laid by females of many different species, including birds, reptiles, amphibians, and fish, and have probably been eaten by mankind for millennia. Bird and reptile eggs consist of a protective eggshell, albumen , and vitellus , contained within various thin membranes...
, except that they are rather flat on the underside.

Many people throughout history have found (and still find) the very rounded, shiny, porcelain
Porcelain
Porcelain is a ceramic material made by heating raw materials, generally including clay in the form of kaolin, in a kiln to temperatures between and...
-like shells of cowries pleasing to look at and to handle. Indeed the term "porcelain" derives from the old Italian
Italian language
Italian is a Romance language spoken mainly in Europe: Italy, Switzerland, San Marino, Vatican City, by minorities in Malta, Monaco, Croatia, Slovenia, France, Libya, Eritrea, and Somalia, and by immigrant communities in the Americas and Australia...
term for the cowrie shell (porcellana) due to their similar translucent appearance. Shells of certain species have historically been used as currency
Currency
In economics, currency refers to a generally accepted medium of exchange. These are usually the coins and banknotes of a particular government, which comprise the physical aspects of a nation's money supply...
in several parts of the world, as well as being used, in the past and present, very extensively in jewellery
Jewellery
Jewellery or jewelry is a form of personal adornment, such as brooches, rings, necklaces, earrings, and bracelets.With some exceptions, such as medical alert bracelets or military dog tags, jewellery normally differs from other items of personal adornment in that it has no other purpose than to...
, and for other decorative and ceremonial purposes. 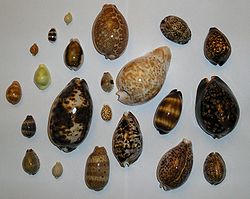 The shells of cowries are almost always smooth and shiny and more or less egg-shaped, with a flat under surface which shows a long, narrow, slit-like opening (aperture
Aperture
In optics, an aperture is a hole or an opening through which light travels. More specifically, the aperture of an optical system is the opening that determines the cone angle of a bundle of rays that come to a focus in the image plane. The aperture determines how collimated the admitted rays are,...
), which is often toothed at the edges. The narrower end of the egg-shaped cowry shell is the anterior end. The spire
Spire (mollusc)
A spire is a descriptive term for part of the coiled shell of mollusks. The word is a convenient aid in describing shells, but it does not refer to a very precise part of shell anatomy: the spire consists of all of the whorls except for the body whorl...
of the shell is not visible in the adult shell of most species, but is visible in juveniles, which have a different shape than the adults.