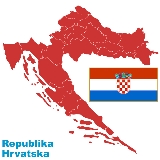 There is a total of 21 županije, counting in the City of Zagreb
Zagreb
Zagreb is the capital and the largest city of the Republic of Croatia. It is in the northwest of the country, along the Sava river, at the southern slopes of the Medvednica mountain. Zagreb lies at an elevation of approximately above sea level. According to the last official census, Zagreb's city...
which has status equal to that of a županija.

The Croatian
Croatian language
Croatian is the collective name for the standard language and dialects spoken by Croats, principally in Croatia, Bosnia and Herzegovina, the Serbian province of Vojvodina and other neighbouring countries...
term županija derives from župa
Župa
A Župa is a Slavic term, used historically among the Southern and Western branches of the Slavs, originally denoting various territorial and other sub-units, usually a small administrative division, especially a gathering of several villages...
meaning parish, so županija would linguistically equate to civil parish in English.

Croatia has had sub-divisions since the Middle Ages
Middle Ages
The Middle Ages is a periodization of European history from the 5th century to the 15th century. The Middle Ages follows the fall of the Western Roman Empire in 476 and precedes the Early Modern Era. It is the middle period of a three-period division of Western history: Classic, Medieval and Modern...
. However, their sizes, names and positions changed with time.

The Kingdom of Croatia-Slavonia
Kingdom of Croatia-Slavonia
The Kingdom of Croatia-Slavonia or Croatia Slavonia was an autonomous kingdom within the Austro-Hungarian Empire. It was part of the Hungarian Kingdom within the dual Austro-Hungarian state, being within the Lands of the Crown of St. Stephen or Transleithania...
was subdivided in 1867 into eight counties or comitatus
Comitatus (Kingdom of Hungary)
A county is the name of a type of administrative units in the Kingdom of Hungary and in Hungary from the 10th century until the present day....
. The Kingdom of Dalmatia
Dalmatia
Dalmatia is a historical region on the eastern coast of the Adriatic Sea. It stretches from the island of Rab in the northwest to the Bay of Kotor in the southeast. The hinterland, the Dalmatian Zagora, ranges from fifty kilometers in width in the north to just a few kilometers in the south....
was similarly divided into districts. The Parliament of Croatia
Parliament of Croatia
The Parliament of Croatia or the Sabor is the unicameral representative body of the citizens of the Republic of Croatia and legislature of the country. Under the terms of the Croatian Constitution, represents the people and is vested with the legislative power...
was officially called Sabor Kraljevine Hrvatske, Dalmacije i Slavonije . Other institutions also bore that title.

The Kingdom of Serbs, Croats and Slovenes retained the territorial subdivisions of its historical provinces up to 1922. Between 1922 and 1929 the Kingdom continued to be divided with some respect to the borders of historical provinces, but previous units of territorial subdivisions (like the counties) were replaced by the greater units called oblast
Oblast
Oblast is a type of administrative division in Slavic countries, including some countries of the former Soviet Union. The word "oblast" is a loanword in English, but it is nevertheless often translated as "area", "zone", "province", or "region"...
(in Serbo-Croato-Slovene language). In the territory of Croatia-Slavonia
Kingdom of Croatia-Slavonia
The Kingdom of Croatia-Slavonia or Croatia Slavonia was an autonomous kingdom within the Austro-Hungarian Empire. It was part of the Hungarian Kingdom within the dual Austro-Hungarian state, being within the Lands of the Crown of St. Stephen or Transleithania...
and Dalmatia
Kingdom of Dalmatia
The Kingdom of Dalmatia was an administrative division of the Habsburg Monarchy from 1815 to 1918. Its capital was Zadar.-History:...
there were six units: Dubrovačka oblast, Osječka oblast, Primorsko-krajiška oblast (Karlovac
Karlovac
Karlovac is a city and municipality in central Croatia. The city proper has a population of 49,082, while the municipality has a population of 59,395 inhabitants .Karlovac is the administrative centre of Karlovac County...
), Splitska oblast, Srijemska oblast (Vukovar
Vukovar
Vukovar is a city in eastern Croatia, and the biggest river port in Croatia located at the confluence of the Vuka river and the Danube. Vukovar is the center of the Vukovar-Syrmia County...
) and Zagrebačka
Zagreb
Zagreb is the capital and the largest city of the Republic of Croatia. It is in the northwest of the country, along the Sava river, at the southern slopes of the Medvednica mountain. Zagreb lies at an elevation of approximately above sea level. According to the last official census, Zagreb's city...
oblast. The following territorial changes were made: Kastavština
Kastav
Kastav is a historical town located about 10 km northwest of Rijeka and about 5 km northeast of Opatija in Primorje-Gorski Kotar County in Croatia.-Demographics:The total population of Kastav is 10,472 ....
was attached to Ljubljanska
Ljubljana
Ljubljana is the capital of Slovenia and its largest city. It is the centre of the City Municipality of Ljubljana. It is located in the centre of the country in the Ljubljana Basin, and is a mid-sized city of some 270,000 inhabitants...
oblast, Međimurje to Mariborska
Maribor
Maribor is the second largest city in Slovenia with 157,947 inhabitants . Maribor is also the largest and the capital city of Slovenian region Lower Styria and the seat of the Municipality of Maribor....
oblast and the Bay of Kotor
Bay of Kotor
The Bay of Kotor in south-western Montenegro is a winding bay on the Adriatic Sea. The bay, sometimes called Europe's southernmost fjord, is in fact a submerged river canyon of the disintegrated Bokelj River which used to run from the high mountain plateaus of Mount Orjen...
to Cetinjska
Cetinje
Cetinje , Цетиње / Cetinje , Italian: Cettigne, Greek: Κετίγνη, Ketígni) is a town and Old Royal Capital of Montenegro. It is also a historical and the secondary capital of Montenegro , with the official residence of the President of Montenegro...
oblast.

In Socialist Yugoslavia
Socialist Federal Republic of Yugoslavia
The Socialist Federal Republic of Yugoslavia was the Yugoslav state that existed from the abolition of the Yugoslav monarchy until it was dissolved in 1992 amid the Yugoslav Wars. It was a socialist state and a federation made up of six socialist republics: Bosnia and Herzegovina, Croatia,...
, the Socialist Republic of Croatia
Socialist Republic of Croatia
Socialist Republic of Croatia was a sovereign constituent country of the second Yugoslavia. It came to existence during World War II, becoming a socialist state after the war, and was also renamed four times in its existence . It was the second largest republic in Yugoslavia by territory and...
was divided into općine (sing. općina) which were smaller than the present counties. The designation općina has been retained for municipalities
Municipality
A municipality is essentially an urban administrative division having corporate status and usually powers of self-government. It can also be used to mean the governing body of a municipality. A municipality is a general-purpose administrative subdivision, as opposed to a special-purpose district...
which are one level smaller than the županije and also smaller than the old općine.

The political representatives elected for županija government used to form a Županijski dom or Chamber of Counties in the Croatian Parliament, between 1993 and 2001.

Executive leader of a county is called župan (translated as "prefect
Prefect
Prefect is a magisterial title of varying definition....
"), who has one or two deputies each called dožupan (lit. "vice-prefect"). The prefect presides over the county's executive government (županijsko poglavarstvo), and represents the county in external affairs.

Since the counties were re-established in 1992, Croatia is divided into 20 counties and the capital city of Zagreb, the latter having the authority and legal status of a county and a city at the same time. Borders of the counties changed in some instances since, with the latest revision taking place in 2006. The counties subdivide into 127 cities and 429 municipalities
Municipalities of Croatia
A Municipality in Croatia is known as an općina . Though equal to Croatian Grads in administrative powers, they are usually more likely to consists of a collection of villages in more rural or suburban area, whereas Grads are more likely to cover urban area...
. 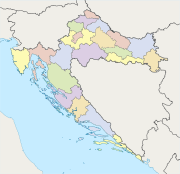 The county names ending in the suffixes -čka and -ska are adjectives, with the noun županija implied, so e.g. Karlovačka's full name is Karlovačka županija. Some counties prefer to swap the order of those two words but they are in the minority (since February 7, 1997 when the order was officially changed).

Zagreb itself is grad, a city
City
A city is a relatively large and permanent settlement. Although there is no agreement on how a city is distinguished from a town within general English language meanings, many cities have a particular administrative, legal, or historical status based on local law.For example, in the U.S...
, due to its importance it has a county status and jurisdiction. Any town with population over 35,000 can take over a part of jurisdiction of its county.
The source of this article is wikipedia, the free encyclopedia.  The text of this article is licensed under the GFDL.