Encyclopedia
Coumaric acid is a hydroxycinnamic acid
Hydroxycinnamic acid
Hydroxycinnamic acids are a class of polyphenols having a C6-C3 skeleton. These compounds are hydroxy derivatives of cinnamic acid.In the category of phytochemicals that can be found in food, there are :* Alpha-cyano-4-hydroxycinnamic acid...
, an organic compound that is a hydroxy
Hydroxyl
A hydroxyl is a chemical group containing an oxygen atom covalently bonded with a hydrogen atom. In inorganic chemistry, the hydroxyl group is known as the hydroxide ion, and scientists and reference works generally use these different terms though they refer to the same chemical structure in...
derivative of cinnamic acid
Cinnamic acid
Cinnamic acid is a white crystalline organic acid, which is slightly soluble in water.It is obtained from oil of cinnamon, or from balsams such as storax. It is also found in shea butter and is the best indication of its environmental history and post-extraction conditions...
. There are three isomer
Isomer
In chemistry, isomers are compounds with the same molecular formula but different structural formulas. Isomers do not necessarily share similar properties, unless they also have the same functional groups. There are many different classes of isomers, like stereoisomers, enantiomers, geometrical...
s, o-coumaric acid, m-coumaric acid, and p-coumaric acid, that differ by the position of the hydroxy substitution of the phenyl group. p-Coumaric acid is the most abundant isomer of the three in nature.

Together with sinapyl alcohol
Sinapyl alcohol
Sinapyl alcohol is an organic compound derived from cinnamic acid. This phytochemical is one of the monolignols. It is biosynthetized via the phenylpropanoid biochemical pathway, its immediate precursor being sinapaldehyde. Sinapyl alcohol is a precursor to lignin or lignans. It is also a...
and coniferyl alcohol
Coniferyl alcohol
Coniferyl alcohol is an organic compound. This colourless crystalline solid is a phytochemical, one of the monolignols. It is synthethized via the phenylpropanoid biochemical pathway. When copolymerized with related aromatic compounds, coniferyl alcohol forms lignin or lignans...
s, p-coumaric acid is a major component of lignocellulose. It is biosynthesized from cinnamic acid
Cinnamic acid
Cinnamic acid is a white crystalline organic acid, which is slightly soluble in water.It is obtained from oil of cinnamon, or from balsams such as storax. It is also found in shea butter and is the best indication of its environmental history and post-extraction conditions...
by the action of the P450-dependent enzyme 4-cinnamic acid hydroxylase.

p-Coumaric acid can be found in a wide variety of edible plants such as peanut
Peanut
The peanut, or groundnut , is a species in the legume or "bean" family , so it is not a nut. The peanut was probably first cultivated in the valleys of Peru. It is an annual herbaceous plant growing tall...
s, tomato
Tomato
The word "tomato" may refer to the plant or the edible, typically red, fruit which it bears. Originating in South America, the tomato was spread around the world following the Spanish colonization of the Americas, and its many varieties are now widely grown, often in greenhouses in cooler...
es, carrot
Carrot
The carrot is a root vegetable, usually orange in colour, though purple, red, white, and yellow varieties exist. It has a crisp texture when fresh...
s, and garlic
Garlic
Allium sativum, commonly known as garlic, is a species in the onion genus, Allium. Its close relatives include the onion, shallot, leek, chive, and rakkyo. Dating back over 6,000 years, garlic is native to central Asia, and has long been a staple in the Mediterranean region, as well as a frequent...
. It is a crystalline solid that is slightly soluble in water, but well soluble in ethanol
Ethanol
Ethanol, also called ethyl alcohol, pure alcohol, grain alcohol, or drinking alcohol, is a volatile, flammable, colorless liquid. It is a psychoactive drug and one of the oldest recreational drugs. Best known as the type of alcohol found in alcoholic beverages, it is also used in thermometers, as a...
and diethyl ether
Diethyl ether
Diethyl ether, also known as ethyl ether, simply ether, or ethoxyethane, is an organic compound in the ether class with the formula . It is a colorless, highly volatile flammable liquid with a characteristic odor...
.

p-Coumaric acid has antioxidant
Antioxidant
An antioxidant is a molecule capable of inhibiting the oxidation of other molecules. Oxidation is a chemical reaction that transfers electrons or hydrogen from a substance to an oxidizing agent. Oxidation reactions can produce free radicals. In turn, these radicals can start chain reactions. When...
properties and is believed to reduce the risk of stomach cancer
Cancer
Cancer , known medically as a malignant neoplasm, is a large group of different diseases, all involving unregulated cell growth. In cancer, cells divide and grow uncontrollably, forming malignant tumors, and invade nearby parts of the body. The cancer may also spread to more distant parts of the...
by reducing the formation of carcinogenic nitrosamine
Nitrosamine
Nitrosamines are chemical compounds of the chemical structure R1N-N=O, some of which are carcinogenic.-Usages:Nitrosamines are used in manufacture of some cosmetics, pesticides, and in most rubber products. -Occurrences:...
s. 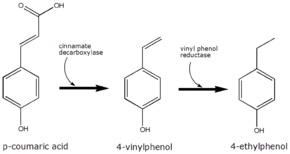