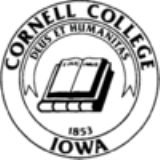 Encyclopedia
Cornell College is a private liberal arts college
Liberal arts colleges in the United States
Liberal arts colleges in the United States are certain undergraduate institutions of higher education in the United States. The Encyclopædia Britannica Concise offers a definition of the liberal arts as a "college or university curriculum aimed at imparting general knowledge and developing general...
in Mount Vernon, Iowa
Mount Vernon, Iowa
Mount Vernon is a city in Linn County, Iowa, United States, adjacent to the city of Lisbon. The city's population was 3,390 when the 2000 census figures were released, but that number was later revised to 3,808 because the Census Bureau had incorrectly reported that 418 residents of a Cornell...
. Originally called the Iowa Conference Seminary, the school was founded in 1853 by Reverend Samuel M. Fellows. Four years later, in 1857, the name was changed to Cornell College, in honor of iron tycoon William Wesley Cornell, who was a distant relative of Ezra Cornell
Ezra Cornell
Ezra Cornell was an American businessman and education administrator. He was a founder of Western Union and a co-founder of Cornell University...
(founder of Cornell University
Cornell University
Cornell University is an Ivy League university located in Ithaca, New York, United States. It is a private land-grant university, receiving annual funding from the State of New York for certain educational missions...
in Ithaca, New York
Ithaca, New York
The city of Ithaca, is a city in upstate New York and the county seat of Tompkins County, as well as the largest community in the Ithaca-Tompkins County metropolitan area...
).

Cornell students study one course at a time (commonly referred to as "the block plan" or "OCAAT"). Since 1978, school years have been divided into nine "blocks" of three-and-a-half weeks each (usually followed by a four-day "block break" to round out to four weeks), during which students are enrolled in a single class; what would normally be covered in a full semester's worth of class at a typical university is covered in just seventeen-and-one-half Cornell class days. While schedules vary from class to class, most courses consist of around 30 hours of lecture, along with additional time spent in the laboratory, studying audio-visual media, or other activities. Colorado College
Colorado College
The Colorado College is a private liberal arts college in Colorado Springs, Colorado, United States, in the foothills of the Rocky Mountains. It was founded in 1874 by Thomas Nelson Haskell...
in Colorado Springs, Colorado
Colorado Springs, Colorado
Colorado Springs is a Home Rule Municipality that is the county seat and most populous city of El Paso County, Colorado, United States. Colorado Springs is located in South-Central Colorado, in the southern portion of the state. It is situated on Fountain Creek and is located south of the Colorado...
; Quest University
Quest University
Quest University Canada is a private non-profit liberal arts and sciences university in Squamish, British Columbia, Canada. The university opened in September 2007 with an enrolment of 74 students; its current enrolment is 300. Quest University is located on a mountain-top campus on the edge of...
in Squamish, British Columbia; Tusculum College
Tusculum College
Tusculum College is a coeducational private college affiliated with the Presbyterian Church , with its main campus in Tusculum, Tennessee, United States, a suburb of Greeneville...
in Tusculum, Tennessee
Tusculum, Tennessee
Tusculum is a city in Greene County, Tennessee, United States. The population was 2,004 at the 2000 census. It is the home of Tusculum College, the oldest university in Tennessee and the 28th oldest in the United States...
;and The University of Montana - Western are the only other colleges operating under this academic calendar.

From its inception, Cornell has accepted women into all degree programs. In 1858, Cornell was host to Iowa's first female recipient of a baccalaureate degree, Mary Fellows, a member of the first graduating class from Cornell College. She received a bachelor's degree in mathematics. In 1871, Harriette J. Cooke became the first female college professor in the United States to become a full professor with a salary equal to that of her male colleagues. 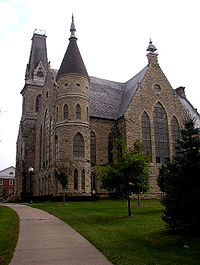 The most widely recognizable building on Cornell's campus is King Chapel. The chapel is the site of the annual convocation at the commencement of the school year as well as the baccalaureate service in the spring for graduating students. The chapel contains a large organ (over 3000 pipes) and is often the site of musical performances. No classes are held in the chapel, and religious services are held in the nearby Allee Chapel.

Old Sem, for a short while the only building of the original college, now houses administrative offices of the college.

Cornell contains 9 academic buildings. College Hall (also sometimes called "Old Main"), the second-oldest building of the college, houses classrooms and offices of several social science and humanities departments. South Hall, originally a male dormitory, houses the Politics and English Departments. Prall House contains offices and classrooms of the Philosophy and Religion Departments. The Merle West Science Center houses the Physics, Biology, and Chemistry Departments. West Science contains the schools only stadium seating lecture-style classroom, with a capacity around 100. The Norton Geology Center contains both an extensive museum and classrooms for geological sciences. Law Hall includes the Math, Computer Science, and Psychology Departments, and also is the computing hub of the campus. McWethy Hall, formerly a gymnasium, now contains the studios and offices of the Art Department. Armstrong Hall and Youngker Hall are adjoining fine arts buildings. Armstrong Hall is the location of the music department, while Younger Hall contains the Theatre Department, including Kimmel Theatre. In addition, the Small Sport Center and the Lytle House contain classrooms of the Kinesiology Department.

Cole Library serves both the college and the Mount Vernon community.

Twenty-five Cornell students have earned NCAA Postgraduate Scholarships, awarded annually to students in their final year of eligibility who excel both athletically and academically. Cornell ranks in the top 15 Division III colleges in recipients of this award.

Cornell's football
American football
American football is a sport played between two teams of eleven with the objective of scoring points by advancing the ball into the opposing team's end zone. Known in the United States simply as football, it may also be referred to informally as gridiron football. The ball can be advanced by...
rivalry with Coe College
Coe College
Coe College is a private, four-year, liberal arts college in Cedar Rapids, Iowa. Founded in 1851, the institution is historically affiliated with the Presbyterian Church . Its current president is James R. Phifer. It is one of the smaller universities to have a chapter of Phi Beta Kappa...
dates to 1891, making it the oldest intercollegiate rivalry west of the Mississippi. Coe currently holds the lead in the series, 60-51-4.

Cornell's mascot
Mascot
The term mascot – defined as a term for any person, animal, or object thought to bring luck – colloquially includes anything used to represent a group with a common public identity, such as a school, professional sports team, society, military unit, or brand name...
is a Ram. In 1949 the Royal Purple, the school's yearbook, offered a $5 prize for someone who could come up with a new mascot to replace either the "Purples" or "Hilltoppers." A sophomore came up with the idea for the ram.

A very young program, having existed for only four years, the Cornell College Mock Trial
Mock trial
A Mock Trial is an act or imitation trial. It is similar to a moot court, but mock trials simulate lower-court trials, while moot court simulates appellate court hearings. Attorneys preparing for a real trial might use a mock trial consisting of volunteers as role players to test theories or...
team has seen tremendous success, currently ranked 16th in the nation. Competing against over 700 teams in the nation including: Yale university, Princeton University, New York University and Washington and Lee University, the Cornell Mock Trial team finished sixth in the nation at the 2010 AMTA (American Mock Trial Association) Nationals.

Cornell Mockers have received numerous individual awards including two All-American attorney awards at the Gold Round National competition in April 2010.

Despite Cornell's small size and location in a small town, many nationally and internationally prominent speakers and performers have visited Cornell, including the following: