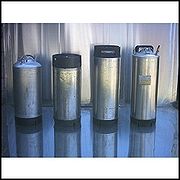 A cornelius keg is a metal container (keg
Keg
A keg is a small barrel.Traditionally, a wooden keg is made by a cooper used to transport items such as nails, gunpowder., and a variety of liquids....
) originally used by the soft drink
Soft drink
A soft drink is a non-alcoholic beverage that typically contains water , a sweetener, and a flavoring agent...
industry, and can be used to store and dispense Homemade Sodas and home brewed
Homebrewing
Homebrewing is the brewing of beer, wine, sake, mead, cider, perry and other beverages through fermentation on a small scale as a hobby for personal consumption, free distribution at social gatherings, amateur brewing competitions or other non-commercial reasons...
beer
Beer
Beer is the world's most widely consumed andprobably oldest alcoholic beverage; it is the third most popular drink overall, after water and tea. It is produced by the brewing and fermentation of sugars, mainly derived from malted cereal grains, most commonly malted barley and malted wheat...

Cornelius kegs were originally made by the IMI Cornelius Company. In the keg, fully made Soda is stored under pressure just like standard cans and bottles. The soda is referred to as Pre-Mix in the industry technology as compared to Bag-In-Box
Bag-In-Box
In packaging, a bag-in-box or BiB is a type of container for the storage and transportation of liquids. It consists of a strong bladder , usually made of several layers of metallised film or other plastics, seated inside a corrugated fiberboard box. The bag is supplied to the 'filler' as an empty...
(BIB) packages which is just concentrated syrup. BIB Soda is cheaper but requires a high quality water source and well calibrated dispenser. Pre-Mix Soda cost more and takes up more space but can be used anywhere, and the equipment is simpler and cheaper. 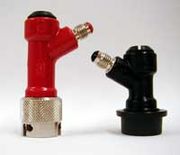 Cornelius kegs come in many sizes:

A Cornelius keg is a stainless steel cylinder which can hold a maximum of 130 PSI. There are three openings in the keg: a large central hole which, by its design, can only be opened when the keg is not pressurized, and two ports with valves which are only opened when a hose with an appropriate fitting is attached to them. The central opening is used for filling and cleaning the keg, while the two ports are used to dispense the drink. On the lid for the central opening, there is a metal handle that when depressed, closes and seals the keg. Also on the top is a pressure relief valve that is usually identified by a circular ring (like a key ring). This can be pulled to release the pressure in the keg. Two metal tubes are attached to the ports on the inside of the keg. The "gas-in" port has a short tube, not reaching the fluid. The "liquid-out" port has a long tube which reaches to the bottom of the keg. When pressurized gas (usually Carbon Dioxide
Carbon dioxide
Carbon dioxide is a naturally occurring chemical compound composed of two oxygen atoms covalently bonded to a single carbon atom...
and sometimes Nitrogen
Nitrogen
Nitrogen is a chemical element that has the symbol N, atomic number of 7 and atomic mass 14.00674 u. Elemental nitrogen is a colorless, odorless, tasteless, and mostly inert diatomic gas at standard conditions, constituting 78.08% by volume of Earth's atmosphere...
) is forced into the "gas-in" port, it pushes the drink from the bottom of the keg, out of the "liquid-out" port, presumably to a tap.

The connectors which attach to the ports come in two varieties: pin-lock and ball-lock, and they are not interchangeable. Historically, pin-lock kegs were used primarily by the Coca-Cola
Coca-Cola
Coca-Cola is a carbonated soft drink sold in stores, restaurants, and vending machines in more than 200 countries. It is produced by The Coca-Cola Company of Atlanta, Georgia, and is often referred to simply as Coke...
company, while ball-lock kegs were used primarily by Pepsi
Pepsi
Pepsi is a carbonated soft drink that is produced and manufactured by PepsiCo...
. On a pin-lock keg, there are metal posts (pins) extending horizontally from around the port. When the connector is attached, these pins hold it in place. The "gas-in" port has two pins, while the "liquid-out" has three, making it impossible to accidentally attach the hoses backwards (which would result in carbon dioxide
Carbon dioxide
Carbon dioxide is a naturally occurring chemical compound composed of two oxygen atoms covalently bonded to a single carbon atom...
bubbling up through the drink, but no drink being dispensed). Ball-lock kegs have ridges in the ports, which are gripped by small metal balls in the connectors. Both types of kegs are fairly easy to find, though ball-lock seem to be more common.

Cornelius kegs are most commonly used by home brewers as an alternative to bottling their beer, as these kegs are easier to fill, clean and maintain than industry-standard beer kegs
Keg
A keg is a small barrel.Traditionally, a wooden keg is made by a cooper used to transport items such as nails, gunpowder., and a variety of liquids....
. Many beer drinkers find that beer which is stored and conditioned in a keg has a better flavor than beer which is conditioned in a bottle. In addition to this, most home brewers must bottle their beer by hand, which can be a tedious chore for large batches of beer. Conveniently, the most common size of Cornelius keg holds five US gallons of liquid, which is the size of a typical batch of home brewed beer. This means that rather than saving, cleaning, and filling approximately fifty bottles, the brewer only needs to fill one keg. Despite the simplified bottling procedure, kegged beer generally requires a kegerator
Kegerator
Kegerator is a term used to describe a residential draft beer dispensing device. A keg, typically of beer, is stored in a refrigerated container in order to keep the keg chilled. The user is able to maintain a tapped keg in such a device for extended periods of time, usually a couple of months,...
, which can be difficult to set up and maintain, for dispensation. Furthermore, individual bottles have superior portability when compared to a Cornelius keg.

Ball lock type quick disconnects seem to be the most popular way to connect both gas and liquid lines to the Cornelius keg for home brew dispensing. A typical beer line to control foaming has a 3/16th internal diameter giving it a resistance of 2 psi per foot. It's common to serve at pressures between 9 and 11 PSI.