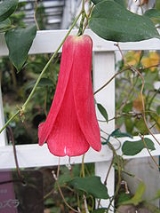 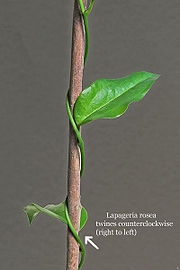 Lapageria rosea, commonly known as the Copihue (co-pee-way < Mapudungun
Mapudungun
The Mapuche language, Mapudungun is a language isolate spoken in south-central Chile and west central Argentina by the Mapuche people. It is also spelled Mapuzugun and sometimes called Mapudungu or Araucanian...
kopiwe) or Chilean Bellflower, is the national flower of Chile
Chile
Chile ,officially the Republic of Chile , is a country in South America occupying a long, narrow coastal strip between the Andes mountains to the east and the Pacific Ocean to the west. It borders Peru to the north, Bolivia to the northeast, Argentina to the east, and the Drake Passage in the far...
. It grows in forest
Forest
A forest, also referred to as a wood or the woods, is an area with a high density of trees. As with cities, depending where you are in the world, what is considered a forest may vary significantly in size and have various classification according to how and what of the forest is composed...
s in the southern part of Chile, being part of the Valdivian temperate rain forests
Valdivian temperate rain forests
The Valdivian temperate rain forests are a temperate broadleaf and mixed-forest ecoregion located on the west coast of southern South America, lying mostly in Chile and extending into a small part of Argentina. It is part of the Neotropic ecozone. The forests are named after the city of Valdivia...
flora. It is the only species in the genus Lapageria.

Lapageria rosea is related to Philesia magellanica (syn. P. buxifolia), another plant from the Valdivian flora, closely related to L. rosea, having similar flowers, but is a shrubby plant bearing some similarity to a heath. ×Philageria veitchii is a hybrid between L. rosea and P. magellanica. It is more similar in appearance to the former.

It is an evergreen
Evergreen
In botany, an evergreen plant is a plant that has leaves in all seasons. This contrasts with deciduous plants, which completely lose their foliage during the winter or dry season.There are many different kinds of evergreen plants, both trees and shrubs...
climbing plant reaching over 10 m high among shrub
Shrub
A shrub or bush is distinguished from a tree by its multiple stems and shorter height, usually under 5–6 m tall. A large number of plants may become either shrubs or trees, depending on the growing conditions they experience...
s and tree
Tree
A tree is a perennial woody plant. It is most often defined as a woody plant that has many secondary branches supported clear of the ground on a single main stem or trunk with clear apical dominance. A minimum height specification at maturity is cited by some authors, varying from 3 m to...
s. Leaves are arranged alternately and are evergreen, leathery, lanceolate and feature three to seven prominent parallel veins. The vines twine counterclockwise in the Southern hemisphere and clockwise when grown in the Northern hemisphere (likely due to the Sun).

The flower
Flower
A flower, sometimes known as a bloom or blossom, is the reproductive structure found in flowering plants . The biological function of a flower is to effect reproduction, usually by providing a mechanism for the union of sperm with eggs...
s are red spotted with white, there are six thick, waxy tepal
Tepal
Tepals are elements of the perianth, or outer part of a flower, which include the petals or sepals. The term tepal is more often applied specifically when all segments of the perianth are of similar shape and color, or undifferentiated, which is called perigone...
s; and they are most frequently produced in late summer and fall, although they may be produced at other times. The fruit
Fruit
In broad terms, a fruit is a structure of a plant that contains its seeds.The term has different meanings dependent on context. In non-technical usage, such as food preparation, fruit normally means the fleshy seed-associated structures of certain plants that are sweet and edible in the raw state,...
is an elongate berry with a tough skin containing numerous small seed
Seed
A seed is a small embryonic plant enclosed in a covering called the seed coat, usually with some stored food. It is the product of the ripened ovule of gymnosperm and angiosperm plants which occurs after fertilization and some growth within the mother plant...
s about the size of a tomato seed, and are covered in an edible fleshy aril. In the wild the plant is pollinated by hummingbird
Hummingbird
Hummingbirds are birds that comprise the family Trochilidae. They are among the smallest of birds, most species measuring in the 7.5–13 cm range. Indeed, the smallest extant bird species is a hummingbird, the 5-cm Bee Hummingbird. They can hover in mid-air by rapidly flapping their wings...
s.

Seed is distributed by birds and other animals.

In the past its fruit was sold in markets, but the plant has now become rare through over-collection and forest clearance.

The roots were once collected and used as a substitute for sarsaparilla
Sarsaparilla
is a perennial trailing vine with prickly stems that is native to Central America. Common names include Sarsaparilla , Honduran Sarsaparilla, and Jamaican Sarsaparilla...
. In 1977 the plant was given legal protection in Chile.

The name of the fruit in Mapudungun
Mapudungun
The Mapuche language, Mapudungun is a language isolate spoken in south-central Chile and west central Argentina by the Mapuche people. It is also spelled Mapuzugun and sometimes called Mapudungu or Araucanian...
is actually kopiw, which is the etymon of Spanish copihue; the Mapuche
Mapuche
The Mapuche are a group of indigenous inhabitants of south-central Chile and southwestern Argentina. They constitute a wide-ranging ethnicity composed of various groups who shared a common social, religious and economic structure, as well as a common linguistic heritage. Their influence extended...
call the plant kolkopiw (colcopihue in Spanish, which may also refer to the whole plant). The flower is called kodkülla in the indigenous language.

There are a substantial number of named garden cultivar
Cultivar
A cultivar'Cultivar has two meanings as explained under Formal definition. When used in reference to a taxon, the word does not apply to an individual plant but to all those plants sharing the unique characteristics that define the cultivar. is a plant or group of plants selected for desirable...
s, mostly developed at one nursery in Chile, with flower colour varying from deep red through pink to pure white (L. rosea 'Albiflora'), and some with variegated flowers. In cultivation, to obtain fruit it is generally necessary to pollinate by hand if there are not native hummingbirds.

Some cultivars are self-fruitful, but better pollination is achieved with differing parents. Germination is best with fresh moist seed; dried seeds take special treatment and have a much poorer germination rate. Propagation of cultivars is by cuttings (usually rooted under mist), layering, or division. Seedlings take from three to ten years to flower. Cuttings usually flower more quickly.

There are several legends in Chile relating to the origin of the Copihue. One tells of how, after a great battle of the Mapuche people, some survivors climbed trees to see the outcome of the battle. Seeing that all their friends were dead, they wept, and their tears became flowers of blood, to honor the souls of their dead friends.

Another legend tells of two Mapuche leaders: Hues, the daughter of Copiñiel, the leader of all Mapuches; and Copih, the chieftain of the Pehuenche
Pehuenche
Pehuenches are an indigenous people that are part of the Mapuche peoples and live in the Andes in south central Chile and Argentina. Their name derives from their habit of harvesting of piñones, the seeds of the Araucaria araucana or pehuén...
tribe. The two young people secretly fell in love. One day, Copiñiel found them exchanging vows on the banks of the Nahuel lake, and, in a fit of rage, ordered them both stabbed through the heart by spears. His guards obeyed, and the two lovers were killed, fell into the lake, and disappeared in the water.

Some time later, both the Mapuche and Pehuenche tribes met on the banks of the lake to mourn the deaths of the two. At sunrise, they saw two spears rise from the water, intertwined by a vine, on which grew two large flowers, one as red as blood, and the other as white as snow. They called these flowers copihue, in honor of the two lovers, Copih and Hues.

The plant was introduced to Europe by William Lobb
William Lobb
William Lobb was a Cornish plant collector, employed by Veitch Nurseries of Exeter, who was responsible for the commercial introduction to England of Araucaria araucana from Chile and the massive Sequoiadendron giganteum from North America.He and his brother, Thomas Lobb, were the first...
during his plant collecting
Plant collecting
Plant collecting involves procuring live or dried plant specimens, for the purposes of research, cultivation or as a hobby.-Collection of live specimens:...
expedition to the Valdivian temperate rain forests
Valdivian temperate rain forests
The Valdivian temperate rain forests are a temperate broadleaf and mixed-forest ecoregion located on the west coast of southern South America, lying mostly in Chile and extending into a small part of Argentina. It is part of the Neotropic ecozone. The forests are named after the city of Valdivia...
in 1845–1848 and was growing at Kew in 1847.