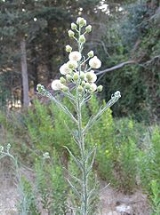 Encyclopedia
Conyza bonariensis is a species of Conyza
Conyza
Conyza is a genus of about 50 species of flowering plants in the family Asteraceae, native to tropical and warm temperate regions throughout the world, and also north into cool temperate regions in North America and eastern Asia...
, found throughout the tropics and subtropics as a weed
Weed
A weed in a general sense is a plant that is considered by the user of the term to be a nuisance, and normally applied to unwanted plants in human-controlled settings, especially farm fields and gardens, but also lawns, parks, woods, and other areas. More specifically, the term is often used to...
; its precise native origin is unknown, but most likely Central America
Central America
Central America is the central geographic region of the Americas. It is the southernmost, isthmian portion of the North American continent, which connects with South America on the southeast. When considered part of the unified continental model, it is considered a subcontinent...
or South America
South America
South America is a continent situated in the Western Hemisphere, mostly in the Southern Hemisphere, with a relatively small portion in the Northern Hemisphere. The continent is also considered a subcontinent of the Americas. It is bordered on the west by the Pacific Ocean and on the north and east...
. Common names include Flax-leaf Fleabane, Wavy-leaf Fleabane and Argentine Fleabane.

It is a rare alien in south eastern England, found beneath walls and in cracks in pavements and concrete driveways. It flowers in August and continues fruiting until the first frosts (sometimes as late as Christmas Day in Berkshire). It is instantly recognisable by its blue-green foliage, very narrow, undulate leaves, and purple-tipped involucral bracts.

C. bonariensis grows up to 75cm in height and its leaves are covered with stiff hairs, including long hairs near the apex of the bract
Bract
In botany, a bract is a modified or specialized leaf, especially one associated with a reproductive structure such as a flower, inflorescence axis, or cone scale. Bracts are often different from foliage leaves. They may be smaller, larger, or of a different color, shape, or texture...
s. It can easily be confused with C. canadensis
Conyza canadensis
Conyza canadensis is an annual plant native throughout most of North America and Central America. Common names include Horseweed, Canadian Horseweed, Canadian Fleabane, Coltstail, Marestail and Butterweed.It is an annual plant growing to 1.5 m tall, with sparsely hairy stems...
, which grows taller, and C. albida.