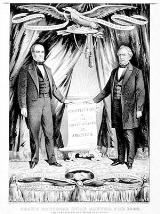 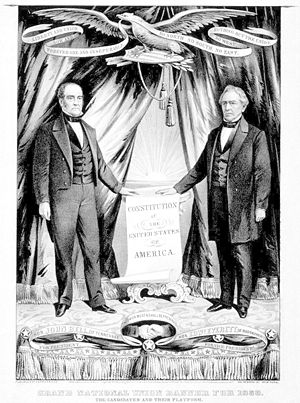 The Constitutional Union Party united Whigs and Know-Nothings who were unwilling to join Democrats or the Republicans. Senator John J. Crittenden
John J. Crittenden
John Jordan Crittenden was a politician from the U.S. state of Kentucky. He represented the state in both the U.S. House of Representatives and the U.S. Senate and twice served as United States Attorney General in the administrations of William Henry Harrison and Millard Fillmore...
of Kentucky, Henry Clay
Henry Clay
Henry Clay, Sr. , was a lawyer, politician and skilled orator who represented Kentucky separately in both the Senate and in the House of Representatives...
's successor in border-state Whiggery, set up a meeting among fifty conservative, pro-compromise congressmen in December 1859, which led to a convention in Baltimore the week of May 9, 1860, one week before the Republican Party convention.

In the 1860 election, the Constitutional Unionists received the great majority of their votes from former southern Whigs or Know-Nothings. A few of their votes were cast by former Democrats who were against secession. Although the party did not get 50% of the popular vote in any state, they won the electoral votes of three states, Virginia
Virginia
The Commonwealth of Virginia , is a U.S. state on the Atlantic Coast of the Southern United States. Virginia is nicknamed the "Old Dominion" and sometimes the "Mother of Presidents" after the eight U.S. presidents born there...
, Kentucky
Kentucky
The Commonwealth of Kentucky is a state located in the East Central United States of America. As classified by the United States Census Bureau, Kentucky is a Southern state, more specifically in the East South Central region. Kentucky is one of four U.S. states constituted as a commonwealth...
, and Tennessee
Tennessee
Tennessee is a U.S. state located in the Southeastern United States. It has a population of 6,346,105, making it the nation's 17th-largest state by population, and covers , making it the 36th-largest by total land area...
, largely due to the split in Democratic votes between Stephen A. Douglas
Stephen A. Douglas
Stephen Arnold Douglas was an American politician from the western state of Illinois, and was the Northern Democratic Party nominee for President in 1860. He lost to the Republican Party's candidate, Abraham Lincoln, whom he had defeated two years earlier in a Senate contest following a famed...
in the North and John C. Breckinridge
John C. Breckinridge
John Cabell Breckinridge was an American lawyer and politician. He served as a U.S. Representative and U.S. Senator from Kentucky and was the 14th Vice President of the United States , to date the youngest vice president in U.S...
in the South. California
California
California is a state located on the West Coast of the United States. It is by far the most populous U.S. state, and the third-largest by land area...
and Everett's home state of Massachusetts were the only non-slave states in which the party received more than 5% of the popular vote.

The party and its purpose disappeared after 1860 as the southern states began to secede. Bell and many other Constitutional Unionists later supported the Confederacy during the Civil War, but backers of the party from north of the Carolinas tended to remain supporters of the Union. Constitutional Unionists were influential in the Wheeling Convention
Wheeling Convention
The 1861 Wheeling Convention was a series of two meetings that ultimately repealed the Ordinance of Secession passed by Virginia, thus establishing the Restored government of Virginia, which ultimately authorized the counties that organized the convention to become West Virginia. The convention was...
, which led to the creation of the Union loyalist state of West Virginia
West Virginia
West Virginia is a state in the Appalachian and Southeastern regions of the United States, bordered by Virginia to the southeast, Kentucky to the southwest, Ohio to the northwest, Pennsylvania to the northeast and Maryland to the east...
, as well as in the declaration of the Kentucky State Legislature for the Union and winning Congressional elections in Kentucky
Kentucky in the Civil War
Kentucky was a border state of key importance in the American Civil War. President Abraham Lincoln recognized the importance of the Commonwealth when he declared "I hope to have God on my side, but I must have Kentucky." In a September 1861 letter to Orville Browning, Lincoln wrote "I think to lose...
and Maryland
Maryland in the Civil War
In the American Civil War, Maryland, a slave state, was one of the border states, straddling the North and South. Due to its location and a desire from both opposing factions to sway its population to their respective causes, Maryland played an important role in the American Civil War...
in June. In Missouri, many of the party joined the new Unconditional Union Party
Unconditional Union Party
The Unconditional Union Party was a loosely organized political entity during the American Civil War and the early days of Reconstruction. First established in 1861 in Missouri, where secession talk was strong, the party fully supported the preservation of the Union at all costs...
headed by Francis P. Blair, Jr.
Francis Preston Blair, Jr.
Francis Preston Blair, Jr. was an American politician and Union Army general during the American Civil War. He represented Missouri in both the House of Representatives and the Senate, and he was the Democratic Party's nominee for Vice President in 1868.-Early life and career:Blair was born in...
and remained active in that state's efforts to remain in the Union by overthrowing the elected government of Claiborne Jackson.