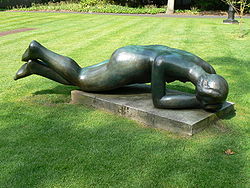 Constant Permeke was a Belgian
Belgium
Belgium , officially the Kingdom of Belgium, is a federal state in Western Europe. It is a founding member of the European Union and hosts the EU's headquarters, and those of several other major international organisations such as NATO.Belgium is also a member of, or affiliated to, many...
painter and sculptor who is considered the leading figure of Flemish
Flanders
Flanders is the community of the Flemings but also one of the institutions in Belgium, and a geographical region located in parts of present-day Belgium, France and the Netherlands. "Flanders" can also refer to the northern part of Belgium that contains Brussels, Bruges, Ghent and Antwerp...
expressionism
Expressionism
Expressionism was a modernist movement, initially in poetry and painting, originating in Germany at the beginning of the 20th century. Its typical trait is to present the world solely from a subjective perspective, distorting it radically for emotional effect in order to evoke moods or ideas...
.

Permeke was born in Antwerp but when he was six years old the family moved to Ostend
Ostend
Ostend  is a Belgian city and municipality located in the Flemish province of West Flanders. It comprises the boroughs of Mariakerke , Stene and Zandvoorde, and the city of Ostend proper – the largest on the Belgian coast....
, where his father became curator of the Municipal Museum of Arts. Permeke went to school in Bruges
Bruges
Bruges is the capital and largest city of the province of West Flanders in the Flemish Region of Belgium. It is located in the northwest of the country....
from 1903 until 1906, when he was drafted into the Belgian army. He served in a university company with whom he settled in Sint-Martens-Latem
Sint-Martens-Latem
Sint-Martens-Latem is a municipality located in the Flemish province of East Flanders, in Belgium. The municipality comprises the towns of Deurle and Sint-Martens-Latem proper. On January 1, 2006 Sint-Martens-Latem had a total population of 8,280...
. After his military service ended in March 1908, Permeke returned to Ostend where he roomed together with another artist, Gustave De Smet
Gustave De Smet
Gustave De Smet was a Belgian expressionist painter.Having first adopted the "luminist" style of Emile Claus, he came under the influence of expressionism and cubism during World War I....
but in 1909 he returned to Latem where he lived as a recluse. His work of this period is characterized by his heavy brush. In 1912 Permeke married Maria Delaere and the newlyweds settled in Ostend. His work from this period gains its expressive force through muted tonality and brutal forms.

When World War I
World War I
World War I , which was predominantly called the World War or the Great War from its occurrence until 1939, and the First World War or World War I thereafter, was a major war centred in Europe that began on 28 July 1914 and lasted until 11 November 1918...
started, Permeke was mobilized and during the defense of Antwerp he was wounded in action near the town of Duffel
Duffel
Duffel is a municipality in the Belgian province of Antwerp.The municipality comprises only the town of Duffel proper. On January 1, 2006 Duffel had a total population of 16,019...
. His wounds forced him to be evacuated to the United Kingdom
United Kingdom
The United Kingdom of Great Britain and Northern IrelandIn the United Kingdom and Dependencies, other languages have been officially recognised as legitimate autochthonous languages under the European Charter for Regional or Minority Languages...
where he was in hospital at South Hillwood. After his release from hospital he was reunited with his family in Folkestone
Folkestone
Folkestone is the principal town in the Shepway District of Kent, England. Its original site was in a valley in the sea cliffs and it developed through fishing and its closeness to the Continent as a landing place and trading port. The coming of the railways, the building of a ferry port, and its...
, where his son John was born. In 1916 he moved to Chardstock
Chardstock
Chardstock is a village and civil parish located on the eastern border of Devon, England off the A358 road between Chard and Axminster.The attractive village is surrounded by farmland and woodland and is within the Blackdown Hills Area of Outstanding Natural Beauty. The village church dates from...
in Devon
Devon
Devon is a large county in southwestern England. The county is sometimes referred to as Devonshire, although the term is rarely used inside the county itself as the county has never been officially "shired", it often indicates a traditional or historical context.The county shares borders with...
shire and started painting again, mostly colorful English landscapes. After the end of the war, the Permeke family returned to Ostend in 1919. In contrast to the happy time in Devonshire, the harsh reality of the worker's life turns Permeke's work back to a gloomier mood as he mainly paints the harsh fisherman's life.

In 1921 Permeke was able to exhibit his work in Antwerp and in Paris
Paris
Paris is the capital and largest city in France, situated on the river Seine, in northern France, at the heart of the Île-de-France region...
. Between 1922 and 1924, Permeke regularly went to Astene, in order to cooperate with Frits Van den Berghe
Frits Van den Berghe
Frits Van den Berghe was a Belgian expressionist painter.He was born at Ghent. Like his friends Constant Permeke and Gustave De Smet, he first adopted the late-impressionist style of Emile Claus, but converted to expressionism during World War I....
. In 1926 Permeke went to Vevey
Vevey
Vevey is a town in Switzerland in the canton Vaud, on the north shore of Lake Geneva, near Lausanne.It was the seat of the district of the same name until 2006, and is now part of the Riviera-Pays-d'Enhaut District...
in Switzerland
Switzerland
Switzerland name of one of the Swiss cantons. ; ; ; or ), in its full name the Swiss Confederation , is a federal republic consisting of 26 cantons, with Bern as the seat of the federal authorities. The country is situated in Western Europe,Or Central Europe depending on the definition....
where he mainly painted mountain scenes. In 1929 he moved to Jabbeke
Jabbeke
Jabbeke is a municipality located in the Belgian province of West Flanders. The municipality comprises the towns of Jabbeke proper, Snellegem, Stalhille, Varsenare and Zerkegem. On 1 January 2006 the municipality had 13,572 inhabitants...
. During this period he changed his subject: instead of the fisherman and the sea he now focused on the farmer and his land. During this period, Permeke was enormously productive with works like "Gouden Oogst" (1935), "De Grote Marine" (1935), "Moederschap" (1936), "Het Afscheid" (1948), "Dagelijks Brood" (1950). Starting in 1937 Permeke tried his hand at sculpting as well. As a sculptor, Permeke tried to isolate the human figure in monumental efforts. "De Zaaier" (1939), "Niobe" (1946) and "De Drie Gratiën" (1949) are good examples of this period.

During World War II
World War II
World War II, or the Second World War , was a global conflict lasting from 1939 to 1945, involving most of the world's nations—including all of the great powers—eventually forming two opposing military alliances: the Allies and the Axis...
, Permeke was forbidden to paint by the German occupiers as his art was seen by them as Entartete Kunst
Degenerate art
Degenerate art is the English translation of the German entartete Kunst, a term adopted by the Nazi regime in Germany to describe virtually all modern art. Such art was banned on the grounds that it was un-German or Jewish Bolshevist in nature, and those identified as degenerate artists were...
. Privately, things were even worse as his son Paul was arrested and sent to Germany as a forced labourer. After the war, Permeke was appointed director of the National higher Institute and of the Royal Academy in Antwerp but after only one year he offered his resignation. In 1947-1948, Permeke had a big retrospective exhibition in Paris but his happiness at the return of his son was soon shattered when in 1948 his wife died. Emotionally scarred and ailing, Permeke had to be nursed by his daughter.

During the last period of his life his work mellowed somewhat as it shows much more refinement in drawing and colors. His last works are "De dame met de rode handschoenen" (1951) and some landscapes painted in Brittany. After his trip to Bretagne in 1951, his health declined even further and he became bedridden.

Constant Permeke died 4 January 1952. Four days later he was buried next to his wife at the cemetery in Jabbeke. On the grave of his beloved wife was placed a statue which Permeke had commissioned by his friend George Minne
George Minne
George Minne was born in Ghent as the son of an architect . Birth names : Georgius Joannes Leonardus...
.
In 1997, Belgium recognized Permeke's achievements by dedicating the 1,000 franc
Franc
The franc is the name of several currency units, most notably the Swiss franc, still a major world currency today due to the prominence of Swiss financial institutions and the former currency of France, the French franc until the Euro was adopted in 1999...
(~ 25 euro
Euro
The euro is the official currency of the eurozone: 17 of the 27 member states of the European Union. It is also the currency used by the Institutions of the European Union. The eurozone consists of Austria, Belgium, Cyprus, Estonia, Finland, France, Germany, Greece, Ireland, Italy, Luxembourg,...
) bill to him and his work. The bill was used until Belgium adopted the euro in 2002.