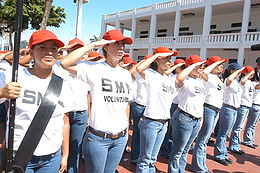 Military Service in Mexico
Mexico
The United Mexican States , commonly known as Mexico , is a federal constitutional republic in North America. It is bordered on the north by the United States; on the south and west by the Pacific Ocean; on the southeast by Guatemala, Belize, and the Caribbean Sea; and on the east by the Gulf of...
(in Spanish, Servicio Militar Nacional, or SMN) currently involves all males reaching the age of eighteen years. Selection is made by a lottery system using the following color scheme: those who draw a black ball must serve as "availability reservists", that is, they must not pursue any activities whatsoever and receive their discharge card at the end of the year.

The ones who get a white ball serve in a Batallón del Servicio Militar Nacional (National Military Service Battalion) composed entirely of one-year SMN conscripts. In certain cities, such as Veracruz
Veracruz
Veracruz, formally Veracruz de Ignacio de la Llave officially Estado Libre y Soberano de Veracruz de Ignacio de la Llave , is one of the 31 states that, along with the Federal District, comprise the 32 federative entities of Mexico. It is divided in 212 municipalities and its capital city is...
and Ciudad Madero
Ciudad Madero
Madero, formally Ciudad Madero, is a city and its coextensive municipality in the state of Tamaulipas, Mexico. The city is located at 22.27°N, 97.83°W in the extreme southeastern part of the state, on the Gulf of Mexico, just north and east of Tampico but still on the banks of the Río Pánuco, and...
, the lottery system also includes a blue ball; whoever draws it must serve in the navy. Military service is also (voluntarily) open to women.

Conscripts are trained in basic combat with fire weapons, in one Infantry
Infantry
Infantrymen are soldiers who are specifically trained for the role of fighting on foot to engage the enemy face to face and have historically borne the brunt of the casualties of combat in wars. As the oldest branch of combat arms, they are the backbone of armies...
Battalion
Battalion
A battalion is a military unit of around 300–1,200 soldiers usually consisting of between two and seven companies and typically commanded by either a Lieutenant Colonel or a Colonel...
.

Their formation was brought about after German submarine attacks against Mexican oil tankers that were providing fuel and materiel to the Allies. These attacks eventually caused the Mexican government to declare war on Germany
Germany
Germany , officially the Federal Republic of Germany , is a federal parliamentary republic in Europe. The country consists of 16 states while the capital and largest city is Berlin. Germany covers an area of 357,021 km2 and has a largely temperate seasonal climate...
. Mexico sent an expeditionary force, the Escuadrón 201
Escuadrón 201
El Escuadrón 201 was a Mexican fighter squadron, part of the Fuerza Aérea Expedicionaria Mexicana that aided the Allied war effort during World War II...
, to fight in the Pacific War
Pacific War
The Pacific War, also sometimes called the Asia-Pacific War refers broadly to the parts of World War II that took place in the Pacific Ocean, its islands, and in East Asia, then called the Far East...
.