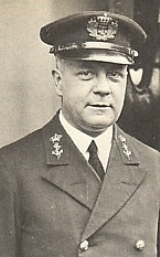 Encyclopedia
Luitenant-Admiraal
Admiral
Admiral is the rank, or part of the name of the ranks, of the highest naval officers. It is usually considered a full admiral and above vice admiral and below admiral of the fleet . It is usually abbreviated to "Adm" or "ADM"...
Conrad Emil Lambert Helfrich, GNL, KCB
Order of the Bath
The Most Honourable Order of the Bath is a British order of chivalry founded by George I on 18 May 1725. The name derives from the elaborate mediæval ceremony for creating a knight, which involved bathing as one of its elements. The knights so created were known as Knights of the Bath...
(October 11, 1886 - September 20, 1962) of the Royal Netherlands Navy
Royal Netherlands Navy
The Koninklijke Marine is the navy of the Netherlands. In the mid-17th century the Dutch Navy was the most powerful navy in the world and it played an active role in the wars of the Dutch Republic and later those of the Batavian Republic and the Kingdom of the Netherlands...
was a leading Dutch naval figure of World War II
World War II
World War II, or the Second World War , was a global conflict lasting from 1939 to 1945, involving most of the world's nations—including all of the great powers—eventually forming two opposing military alliances: the Allies and the Axis...
. He was born in Semarang
Semarang
- Economy :The western part of the city is home to many industrial parks and factories. The port of Semarang is located on the north coast and it is the main shipping port for the province of Central Java. Many small manufacturers are located in Semarang, producing goods such as textiles,...
.

"In the early 1920s, when he was teaching other young sprouts at Den Helder, his favorite lecture was on the coming war between the U.S. and Japan. "When?" his students would ask him, and he would boom: "In this generation." Then he would stride to a blackboard map and chalk three Xs— on Pearl Harbor
Pearl Harbor
Pearl Harbor, known to Hawaiians as Puuloa, is a lagoon harbor on the island of Oahu, Hawaii, west of Honolulu. Much of the harbor and surrounding lands is a United States Navy deep-water naval base. It is also the headquarters of the U.S. Pacific Fleet...
, the Panama Canal
Panama Canal
The Panama Canal is a ship canal in Panama that joins the Atlantic Ocean and the Pacific Ocean and is a key conduit for international maritime trade. Built from 1904 to 1914, the canal has seen annual traffic rise from about 1,000 ships early on to 14,702 vessels measuring a total of 309.6...
, San Francisco. 'There,' he would say, 'the attacks will fall.' "

Helfrich was appointed overall commander of all forces in the Netherlands East Indies in October 1939. At the outbreak of the war in the Pacific he gave instructions to wage war aggressively. His small force of submarine
Submarine
A submarine is a watercraft capable of independent operation below the surface of the water. It differs from a submersible, which has more limited underwater capability...
s sank more Japanese ships in the first weeks of the war than the entire British and US navies together, an exploit which earned him the nickname "Ship-a-day Helfrich". Admiral Helfrich worked tirelessly to establish co-operation with the Allied navies in the area since he knew that the Dutch could not hope to protect the Dutch East Indies
Dutch East Indies
The Dutch East Indies was a Dutch colony that became modern Indonesia following World War II. It was formed from the nationalised colonies of the Dutch East India Company, which came under the administration of the Netherlands government in 1800....
by themselves. 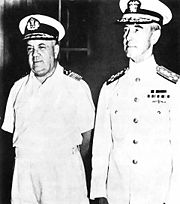 When a combined command (ABDA
Abda
Abda may refer to:People*Abda , a personal name, given to two biblical figures*Abda of Edessa, saint of the Assyrian Church of the East*Abda of Dair-Koni, also known as Rabban Mar Abda, abbot and saint...
) was finally created in January 1942, he was bypassed for the post of commander of the navy, in favour of Admiral Thomas C. Hart
Thomas C. Hart
Thomas Charles Hart was an admiral of the United States Navy, whose service extended from the Spanish-American War through World War II. Following his retirement from the Navy, he served briefly as a United States Senator from Connecticut.-Life and career:Hart was born in Genesee County, Michigan...
of the United States Navy
United States Navy
The United States Navy is the naval warfare service branch of the United States Armed Forces and one of the seven uniformed services of the United States. The U.S. Navy is the largest in the world; its battle fleet tonnage is greater than that of the next 13 largest navies combined. The U.S...
. Helfrich's mission to defend Java at all costs clashed with Hart's desire to conserve as many naval units as possible. On February 12, 1942, Helfrich succeeded Hart as commander of the American-British-Dutch-Australian naval forces in the Pacific and immediately went on the offensive. Unfortunately, the courage of the 'Striking Force' was to no avail in the face of the overwhelming superiority of the Japanese navy and after the disastrous Battle of the Java Sea
Battle of the Java Sea
The Battle of the Java Sea was a decisive naval battle of the Pacific campaign of World War II, that sealed the fate of the Netherlands East Indies....
most of the ABDA ships under his command had been put out of action and ABDA itself was dismantled. Helfrich spent the remainder of the war in Ceylon
Sri Lanka
Sri Lanka, officially the Democratic Socialist Republic of Sri Lanka is a country off the southern coast of the Indian subcontinent. Known until 1972 as Ceylon , Sri Lanka is an island surrounded by the Indian Ocean, the Gulf of Mannar and the Palk Strait, and lies in the vicinity of India and the...
preparing the return of Dutch administration to the Dutch East Indies.

He remained in command until his retirement from the navy on January 1, 1949.

For his services during the World War, Helfrich received several awards. He was Commander of the Order of Orange-Nassau
Order of Orange-Nassau
The Order of Orange-Nassau is a military and civil order of the Netherlands which was created on 4 April 1892 by the Queen regent Emma of the Netherlands, acting on behalf of her under-age daughter Queen Wilhelmina. The Order is a chivalry order open to "everyone who have earned special merits for...
with Swords, Knight Grand Cross of the Order of the Netherlands Lion, Honorary Knight Commander of the Military Division of the Most Honourable Order of the Bath
Order of the Bath
The Most Honourable Order of the Bath is a British order of chivalry founded by George I on 18 May 1725. The name derives from the elaborate mediæval ceremony for creating a knight, which involved bathing as one of its elements. The knights so created were known as Knights of the Bath...
(UK) and awarded the Silver Cross (5th grade) of the Virtuti Militari
Virtuti Militari
The Order Wojenny Virtuti Militari is Poland's highest military decoration for heroism and courage in the face of the enemy at war...
(Poland).