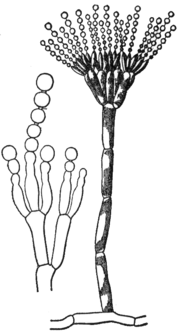 Conidia, sometimes termed conidiospores, are asexual
Asexual reproduction
Asexual reproduction is a mode of reproduction by which offspring arise from a single parent, and inherit the genes of that parent only, it is reproduction which does not involve meiosis, ploidy reduction, or fertilization. A more stringent definition is agamogenesis which is reproduction without...
, non-motile spore
Spore
In biology, a spore is a reproductive structure that is adapted for dispersal and surviving for extended periods of time in unfavorable conditions. Spores form part of the life cycles of many bacteria, plants, algae, fungi and some protozoa. According to scientist Dr...
s of a fungus
Fungus
A fungus is a member of a large group of eukaryotic organisms that includes microorganisms such as yeasts and molds , as well as the more familiar mushrooms. These organisms are classified as a kingdom, Fungi, which is separate from plants, animals, and bacteria...
and are named after the greek word for dust, konia. They are also called mitospores due to the way they are generated through the cellular process of mitosis
Mitosis
Mitosis is the process by which a eukaryotic cell separates the chromosomes in its cell nucleus into two identical sets, in two separate nuclei. It is generally followed immediately by cytokinesis, which divides the nuclei, cytoplasm, organelles and cell membrane into two cells containing roughly...
. The two new haploid cells are genetically identical to the haploid parent, and can develop into new organisms if conditions are favorable, and serve in biological dispersal
Biological dispersal
Biological dispersal refers to species movement away from an existing population or away from the parent organism. Through simply moving from one habitat patch to another, the dispersal of an individual has consequences not only for individual fitness, but also for population dynamics, population...
.

Asexual reproduction in Ascomycetes (the Phylum Ascomycota
Ascomycota
The Ascomycota are a Division/Phylum of the kingdom Fungi, and subkingdom Dikarya. Its members are commonly known as the Sac fungi. They are the largest phylum of Fungi, with over 64,000 species...
) is by the formation of conidia, which are borne on specialized stalks called conidiophores. The morphology of these specialized conidiophores is often distinctive of a specific species and can therefore be used in identification of the species.

There are two main types of conidium development:

A conidium may form germ tubes (germination tubes) and/or conidial anastomosis tubes
Conidial anastomosis tubes
Conidial anastomosis tubes are cells formed from the conidia of many filamentous fungi. These cells have a tubular shape and form an anastomosis that allows fusion between conidia....
(CATs) in specific conditions. These two are some of the specialized hypha
Hypha
A hypha is a long, branching filamentous structure of a fungus, and also of unrelated Actinobacteria. In most fungi, hyphae are the main mode of vegetative growth, and are collectively called a mycelium; yeasts are unicellular fungi that do not grow as hyphae.-Structure:A hypha consists of one or...
e that are formed by fungal conidia. The germ tubes will grow to form the hyphae and fungal mycelia. The conidial anastomosis tubes are morphologically and physiologically distinct from germ tubes. After conidia are induced to form conidial anastomosis tubes, they grow homing toward each other, and they fuse. Once fusion happens, the nuclei can pass through fused CATs. These are events of fungal vegetative growth and not sexual reproduction. Fusion between these cells seems to be important for some fungi during early stages of colony establishment. The production of these cells has been suggested to occur in 73 different species of fungi.


Structures for release of conidia

Conidiogenesis is an important mechanism of spread of plant pathogens. In some cases, specialized macroscopic fruiting structures perhaps 1mm or so in diameter containing masses of conidia are formed under the skin of the host plant and then erupt through the surface and allow the spores to be distributed by wind and rain. One of these structures is called a conidioma (plural: conidiomata).

Two important types of conidiomata, distinguished by their form, are:

Pycnidial conidiomata or pycnidia form in the fungal tissue itself, and are shaped like a bulging vase. The spores are released through a small opening at the apex, the ostiole.

Acervular conidiomata, or acervuli, are cushion-like structures that form within the tissues of a host organism:

Mostly they develop a flat layer of relatively short conidiophores which then produce masses of spores. The increasing pressure leads to the splitting of the epidermis and cuticle and allows release of the conidia from the tissue.

Conidia are always present in the air, but levels fluctuate from day to day and with the seasons. An average person inhales 40 conidia per hour.

Conidia are often the method by which some normally harmless but heat-tolerating (thermotolerant), common fungi establish infection in certain types of severely immunocompromised patients (usually acute leukemia
Leukemia
Leukemia or leukaemia is a type of cancer of the blood or bone marrow characterized by an abnormal increase of immature white blood cells called "blasts". Leukemia is a broad term covering a spectrum of diseases...
patients on induction chemotherapy, AIDS
AIDS
Acquired immune deficiency syndrome or acquired immunodeficiency syndrome is a disease of the human immune system caused by the human immunodeficiency virus...
patients with superimposed B-cell lymphoma, bone marrow transplantation patients, or major organ transplant patients suffering from graft versus host disease). Their immune system is not strong enough to fight off the fungus, and it may, for example, colonise the lung, resulting in a pulmonary infection.