Encyclopedia
The Confederation of British Industry is a British not for profit organisation
Non-profit organization
Nonprofit organization is neither a legal nor technical definition but generally refers to an organization that uses surplus revenues to achieve its goals, rather than distributing them as profit or dividends...
incorporated by Royal charter
Royal Charter
A royal charter is a formal document issued by a monarch as letters patent, granting a right or power to an individual or a body corporate. They were, and are still, used to establish significant organizations such as cities or universities. Charters should be distinguished from warrants and...
which promotes the interests of its members, some 200,000 British businesses, a figure which includes some 80% of FTSE 100 companies and around 50% of FTSE 350 companies.

The CBI works to promote these interests by lobbying and advising governments, networking with other businesses and creating intelligence through analysis of government policies and compilation of statistics, both in the United Kingdom and internationally through their offices in Beijing
Beijing
Beijing , also known as Peking , is the capital of the People's Republic of China and one of the most populous cities in the world, with a population of 19,612,368 as of 2010. The city is the country's political, cultural, and educational center, and home to the headquarters for most of China's...
, Brussels
Brussels
Brussels , officially the Brussels Region or Brussels-Capital Region , is the capital of Belgium and the de facto capital of the European Union...
, New Delhi
New Delhi
New Delhi is the capital city of India. It serves as the centre of the Government of India and the Government of the National Capital Territory of Delhi. New Delhi is situated within the metropolis of Delhi. It is one of the nine districts of Delhi Union Territory. The total area of the city is...
and Washington DC.

It is the foremost lobbying
Lobbying
Lobbying is the act of attempting to influence decisions made by officials in the government, most often legislators or members of regulatory agencies. Lobbying is done by various people or groups, from private-sector individuals or corporations, fellow legislators or government officials, or...
organisation for UK business on national and international issues. It works with the UK government, international legislators
International law
Public international law concerns the structure and conduct of sovereign states; analogous entities, such as the Holy See; and intergovernmental organizations. To a lesser degree, international law also may affect multinational corporations and individuals, an impact increasingly evolving beyond...
and policymakers to help UK businesses compete effectively.

The present Director-General is John Cridland, former Deputy Director General, who assumed the role in January 2011. He replaced Richard Lambert
Richard Lambert
Sir Richard Peter Lambert is the former Director-General of the CBI, and the present Chancellor of the University of Warwick.-Education:...
, who was formerly the editor of the Financial Times
Financial Times
The Financial Times is an international business newspaper. It is a morning daily newspaper published in London and printed in 24 cities around the world. Its primary rival is the Wall Street Journal, published in New York City....
and member of the Bank of England
Bank of England
The Bank of England is the central bank of the United Kingdom and the model on which most modern central banks have been based. Established in 1694, it is the second oldest central bank in the world...
Monetary Policy Committee
Monetary Policy Committee
The Monetary Policy Committee is a committee of the Bank of England, which meets for two and a half days every month to decide the official interest rate in the United Kingdom . It is also responsible for directing other aspects of the government's monetary policy framework, such as quantitative...
.

CBI policy is decided by its members – senior professionals from all sectors and sizes of business are directly involved in the policy-making process.

The CBI conducts numerous surveys and reports which are of particular use to its members. Research conducted is available to the relevant sections of its membership.

In September 2009, it concluded that UK universities should be more scrupulous over who is funded for university courses, with concern over some universities seeking quantity of students rather than quality of learning. Industry wanted students with work-friendly skills and knowledge. Students were expected to contribute more to their courses. 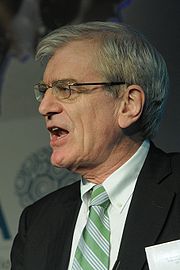