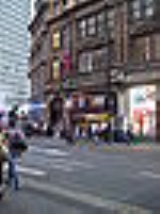 On the Central line it is between and , and on the Northern line it is between and . It is located at St Giles Circus, the junction of Tottenham Court Road
Tottenham Court Road
Tottenham Court Road is a major road in central London, United Kingdom, running from St Giles Circus north to Euston Road, near the border of the City of Westminster and the London Borough of Camden, a distance of about three-quarters of a mile...
, Oxford Street
Oxford Street
Oxford Street is a major thoroughfare in the City of Westminster in the West End of London, United Kingdom. It is Europe's busiest shopping street, as well as its most dense, and currently has approximately 300 shops. The street was formerly part of the London-Oxford road which began at Newgate,...
, New Oxford Street and Charing Cross Road
Charing Cross Road
Charing Cross Road is a street in central London running immediately north of St Martin-in-the-Fields to St Giles Circus and then becomes Tottenham Court Road...
and is in Travelcard Zone 1
Travelcard Zone 1
Fare zone 1 is the central zone of Transport for London's zonal fare system used for calculating the price of tickets for travel on the London Underground, London Overground, Docklands Light Railway and, since 2007, on National Rail services. For most tickets, travel through the zone is charged...
.

The station opened as part of the Central London Railway
Central London Railway
The Central London Railway , also known as the Twopenny Tube, was a deep-level, underground "tube" railway that opened in London in 1900...
(CLR) on 30 July 1900. From that date until 24 September 1933, the next station eastbound on the Central line was the now defunct ; the next stop in that direction is now . The platforms are under Oxford Street west of St Giles' Circus, and were originally connected to the ticket hall via lifts at the east end of the platforms. The original station building is in Oxford Street and was designed in common with other CLR stations by Harry Bell Measures
Harry Bell Measures
Harry Bell Measures was an English architect.He had a varied career. From 1884 - 1892 he was in-house architect for William Willett producing high quality housing for the well-heeled in London and South East England; these were normally in the an ornate red brick Queen Anne style which was...
. Much modified, it now forms part of the station entrance, and some elements of the original facade survive above the canopy. Apart from those very limited original features of the entrance, the station building otherwise together with a whole row of other elegant old buildings were demolished in 2009.

The original ticket office was on the south east corner of the junction of Oxford Street and Charing Cross Road, and its original lift shafts and emergency stairs are still extant. The emergency stairs are often used as access down to the ends of the Northern line platform, as there are currently insufficient escalators for the volume of traffic using the station. The lift shafts are used for offices and station facilities. The original CCE&HR station buildings were destroyed when the Centre Point
Centre Point
Centre Point is a substantial concrete and glass office building in central London, England, occupying 101-103 New Oxford Street, WC1, close to St Giles Circus and almost directly above Tottenham Court Road tube station. The site was once occupied by a gallows...
tower block was built.

Like a number of other central area stations, Tottenham Court Road underwent improvements in the early 1930s to replace the original sets of lifts with escalators. A shaft for three escalators was driven from the ticket hall under the junction down to the east end of the Central line platforms ending at an intermediate circulation space. A further pair of escalators descend from this level to the north end of the Northern line platforms. The lifts were removed and the redundant shafts were used as ventilation ducts. In 1938, a chiller plant
Tottenham Court Road chiller
London Transport Board's experimental refrigeration plant was a chiller installed on the London Underground at Tottenham Court Road tube station. The plant was operational between 1938 and 1949....
began operating at the station. It was decommissioned in 1949.

Passenger congestion entering and leaving the Northern line platforms was partially eased by the addition of a short single escalator at the centre of the platform leading up to a passageway linking to the intermediate circulation area. However, this is in itself a cause of congestion, as traffic trying to leave the station from the Northern line finds itself in the path of traffic entering and travelling to the Central line.

In 1984 the entire station was redecorated, losing the distinctive Leslie Green
Leslie Green
Leslie William Green was an English architect known especially for his design of iconic stations constructed on the London Underground railway system in central London during the first decade of the 20th century....
designed platform tiling pattern of the Yerkes
Charles Yerkes
Charles Tyson Yerkes was an American financier, born in Philadelphia. He played a major part in developing mass-transit systems in Chicago and London.-Philadelphia:...
tube lines (which included the CCE&HR), and the plain white platform tiles of the CLR. The 1980s design includes panels of tessellated mural mosaic by Eduardo Paolozzi
Eduardo Paolozzi
Sir Eduardo Luigi Paolozzi, KBE, RA , was a Scottish sculptor and artist. He was a major figure in the international art sphere, while, working on his own interpretation and vision of the world. Paolozzi investigated how we can fit into the modern world to resemble our fragmented civilization...
(whose signature appears at several places within the station), and is a distinct and noticeable feature of the station. The mosaic's frenetic design is intended to reflect the station's position adjacent to Tottenham Court Road's large concentration of hi-fi and electronics shops.

The station had four entrances to the sub-surface ticket hall from the north-east, south-west and north-west corners of the junction and from a subway beneath the Centrepoint building which starts on Andrew Borde Street. The entrances were frequently congested leading to occasions during peak periods of the day when they were briefly closed to prevent overcrowding in the station.

To eliminate this congestion, Transport for London
Transport for London
Transport for London is the local government body responsible for most aspects of the transport system in Greater London in England. Its role is to implement the transport strategy and to manage transport services across London...
is drastically reconstructing large parts of the station. This involves building a much larger ticket office under the forecourt of Centre Point, new sets of escalators to reach the central section of the Northern line platforms from the ticket office and step-free access to the platforms. The subway to Andrew Borde Street is being replaced as part of this development.

From 2 April 2011 until 28 November 2011 the Northern line platforms were closed for structural upgrade works and Northern line trains ran non-stop through the station.

The western side of the original ticket office will be expanded to include escalators down to Crossrail. To enable this to happen the Astoria
London Astoria
The London Astoria was a music venue, located at 157 Charing Cross Road, in London, England. It had been leased and run by Festival Republic since 2000. It was closed on 15 January 2009 and has since been demolished...
theatre has already been demolished and the original Central line entrance will eventually be demolished as well.

In addition, as part of the Crossrail
Crossrail
Crossrail is a project to build a major new railway link under central London. The name refers to the first of two routes which are the responsibility of Crossrail Ltd. It is based on an entirely new east-west tunnel with a central section from to Liverpool Street station...
project, a new western entrance and ticket hall is being built under Dean Street
Dean Street
Dean Street is a street in Soho, London, England, running between Oxford Street to the north and Shaftesbury Avenue to the south.-Historical figures:The street has a rich history. In 1764 a young Mozart gave a recital at 21 Dean Street...
leading to both the Crossrail platforms and to the parallel Central line platforms.