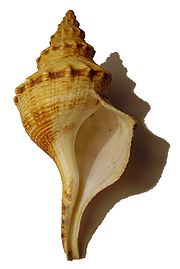 Some sea marine
Marine (ocean)
Marine is an umbrella term. As an adjective it is usually applicable to things relating to the sea or ocean, such as marine biology, marine ecology and marine geology...
gastropods have a soft tubular anterior extension of the mantle
Mantle (mollusc)
The mantle is a significant part of the anatomy of molluscs: it is the dorsal body wall which covers the visceral mass and usually protrudes in the form of flaps well beyond the visceral mass itself.In many, but by no means all, species of molluscs, the epidermis of the mantle secretes...
called a siphon through which water is drawn into the mantle cavity and over the gill
Gill
A gill is a respiratory organ found in many aquatic organisms that extracts dissolved oxygen from water, afterward excreting carbon dioxide. The gills of some species such as hermit crabs have adapted to allow respiration on land provided they are kept moist...
and which serves as a chemoreceptor to locate food. In many carnivorous snails, where the siphon is particularly long, the structure of the shell has been modified in order to house and protect the soft structure of the siphon. Thus the siphonal canal is a semi-tubular extension of the aperture
Aperture (mollusc)
The aperture is an opening in certain kinds of mollusc shells: it is the main opening of the shell, where part of the body of the animal emerges for locomotion, feeding, etc....
of the shell through which the siphon is extended when the animal is active.

One gastropod whose shell has an exceptionally long siphonal canal is the Venus comb murex
Venus Comb Murex
The Venus comb murex, scientific name Murex pecten, is a species of large predatory sea snail, a marine gastropod mollusk in the family Muricidae, the rock snails or murex snails....
. Some gastropods have a simple siphonal notch
Siphonal notch
A siphonal notch is a feature of the shell anatomy in some sea snails, marine gastropod mollusks.In these particular groups of sea snails the animal has a soft tubular anterior extension of the mantle called a siphon through which water is drawn into the mantle cavity and over the gill and which...
at the edge of the aperture instead.