Encyclopedia
Competitiveness is a comparative concept of the ability and performance of a firm, sub-sector or country to sell and supply goods and/or services in a given market
Market
A market is one of many varieties of systems, institutions, procedures, social relations and infrastructures whereby parties engage in exchange. While parties may exchange goods and services by barter, most markets rely on sellers offering their goods or services in exchange for money from buyers...
. Although widely used in economics
Economics
Economics is the social science that analyzes the production, distribution, and consumption of goods and services. The term economics comes from the Ancient Greek from + , hence "rules of the house"...
and business management, the usefulness of the concept, particularly in the context of national competitiveness, is vigorously disputed by economists, such as Paul Krugman
Paul Krugman
Paul Robin Krugman is an American economist, professor of Economics and International Affairs at the Woodrow Wilson School of Public and International Affairs at Princeton University, Centenary Professor at the London School of Economics, and an op-ed columnist for The New York Times...
.

The term may also be applied to markets, where it is used to refer to the extent to which the market structure
Market structure
In economics, market structure .* Monopolistic competition, also called competitive market, where there are a large number of firms, each having a small proportion of the market share and slightly differentiated products.* Oligopoly, in which a market is dominated by a small number of firms that...
may be regarded as perfectly competitive. This usage has nothing to do with the extent to which individual firms are "competitive'.

Empirical observation confirms that resources (capital, labor, technology) and talent tend to concentrate geographically (Easterly and Levine 2002). This result reflects the fact that firms are embedded in inter-firm relationships with networks of suppliers, buyers and even competitors that help them to gain competitive advantages in the sale of its products and services. While arms-length market relationships do provide these benefits, at times there are externalities that arise from linkages among firms in a geographic area or in a specific industry (textiles, leather goods, silicon chips) that cannot be captured or fostered by markets alone. The process of “clusterization,” the creation of “value chains,” or “industrial districts” are models that highlight the advantages of networks.

Within capitalist
Capitalism
Capitalism is an economic system that became dominant in the Western world following the demise of feudalism. There is no consensus on the precise definition nor on how the term should be used as a historical category...
economic systems, the drive of enterprises is to maintain and improve their own competitiveness, this practically pertains to business sectors. 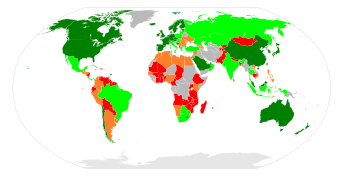 The term is also used to refer in a broader sense to the economic competitiveness of countries, regions or cities. Recently, countries are increasingly looking at their competitiveness on global markets. Ireland (1997), Saudi Arabia (2000), Greece (2003), Croatia (2004), Bahrain (2005), the Philippines (2006), Guyana and the Dominican Republic are just some examples of countries that have advisory bodies or special government agencies that tackle competitiveness issues. Even regions or cities, such as Dubai or the Basque Country, are considering the establishment of such a body.

The institutional model applied in the case of National Competitiveness Programs (NCP) varies from country to country, however, there are some common features. The leadership structure of NCPs relies on strong support from the highest level of political authority. High-level support provides credibility with the appropriate actors in the private sector. Usually, the council or governing body will have a designated public sector leader (president, vice-president or minister) and a co-president drawn from the private sector. Notwithstanding the public sector’s role in strategy formulation, oversight, and implementation, national competitiveness programs should have strong, dynamic leadership from the private sector at all levels – national, local and firm. From the outset, the program must provide a clear diagnostic of the problems facing the economy and a compelling vision that appeals to a broad set of actors who are willing to seek change and implement an outward-oriented growth strategy. Finally, most programs share a common view on the importance of networks of firms or “clusters” as an organizing principal for collective action. Based on a bottom-up approach, programs that support the association among private business leadership, civil society organizations, public institutions and political leadership can better identify barriers to competitiveness; develop joint-decisions on strategic policies and investments; and yield better results in implementation.

Competitiveness is important for any economy that must rely on international trade to balance import of energy and raw materials. The European Union (EU) has enshrined industrial research and technological development (R&D) in her Treaty in order to become more competitive. In 2009, €12 billion of the EU budget (totalling €133.8 billion) will go on projects to boost Europe's competitiveness. The way for the EU to face competitiveness is to invest in education, research, innovation and technological infrastructures.

The International Economic Development Council (IEDC) in Washington, D.C. published the "Innovation Agenda: A Policy Statement on American Competitiveness". This paper summarizes the ideas expressed at the 2007 IEDC Federal Forum and provides policy recommendations for both economic developers and federal policy makers that aim to ensure America remains globally competitive in light of current domestic and international challenges.

A US government sponsored program under the Reagan administration
Reagan Administration
The United States presidency of Ronald Reagan, also known as the Reagan administration, was a Republican administration headed by Ronald Reagan from January 20, 1981, to January 20, 1989....
called Project Socrates
Project Socrates
Project Socrates was a US Defense Intelligence Agency program established in 1983 within the Reagan administration. This classified program, founded and directed by physicist Michael Sekora, was designed for the purpose of identifying the root cause of the United States' declining ability to...
, was initiatied to, 1) determine why US competitiveness was declinning, 2) create a solution to restore US competitiveness. The Socrates Team headed by Michael Sekora, a physicist, built an all-source intelligence system to research all competitiveness of mankind from the beginning of time. The research resulted in ten findings which served as the framework for the "Socrates Competitive Strategy System". Among the ten finding on competitiveness was that 'the source of all competitive advantage is the ability to access and utilize technology to satisfy one or more customer needs better than competitors, where technology is defined as any use of science to achieve a function".

Krugman (1994) argues that "As a practical matter, however, the doctrine of 'competitiveness' is flatly wrong. The world's leading nations are not, to any important degree, in economic competition with each other." As Krugman notes, national economic welfare is determined primarily by productivity
Productivity
Productivity is a measure of the efficiency of production. Productivity is a ratio of what is produced to what is required to produce it. Usually this ratio is in the form of an average, expressing the total output divided by the total input...
in both traded and non-traded sectors of the economy.