Committees for the Defense of the Revolution
Topic Home
Discussion
0 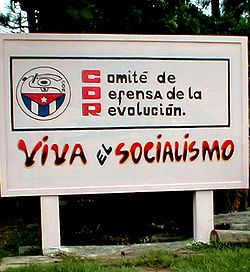 Committees for the Defense of the Revolution , or CDR, is a network of neighborhood committee
Committee
A committee is a type of small deliberative assembly that is usually intended to remain subordinate to another, larger deliberative assembly—which when organized so that action on committee requires a vote by all its entitled members, is called the "Committee of the Whole"...
s across Cuba
Cuba
The Republic of Cuba is an island nation in the Caribbean. The nation of Cuba consists of the main island of Cuba, the Isla de la Juventud, and several archipelagos. Havana is the largest city in Cuba and the country's capital. Santiago de Cuba is the second largest city...
. The organizations, described as the "eyes and ears of the Revolution", exist to promote social welfare and report on "counter-revolutionary" activity. As of 2010, 8.4 million Cubans of the national population of 11.2 million, were registered as CDR members.

The CDR system was formed by Fidel Castro
Fidel Castro
Fidel Alejandro Castro Ruz is a Cuban revolutionary and politician, having held the position of Prime Minister of Cuba from 1959 to 1976, and then President from 1976 to 2008. He also served as the First Secretary of the Communist Party of Cuba from the party's foundation in 1961 until 2011...
on September 28, 1960, following the 1959 Cuban Revolution
Cuban Revolution
The Cuban Revolution was an armed revolt by Fidel Castro's 26th of July Movement against the regime of Cuban dictator Fulgencio Batista between 1953 and 1959. Batista was finally ousted on 1 January 1959, and was replaced by a revolutionary government led by Castro...
, which overthrow the U.S.-backed dictator Fulgencio Batista
Fulgencio Batista
Fulgencio Batista y Zaldívar was the United States-aligned Cuban President, dictator and military leader who served as the leader of Cuba from 1933 to 1944 and from 1952 to 1959, before being overthrown as a result of the Cuban Revolution....
. The slogan of the CDR is, "¡En cada barrio
Barrio
Barrio is a Spanish word meaning district or neighborhood.-Usage:In its formal usage in English, barrios are generally considered cohesive places, sharing, for example, a church and traditions such as feast days...
, Revolución!" ("In every neighborhood, Revolution!").

The CDR officials have the duty to monitor the activities of each person on their respective blocks. There is an individual file kept on each block resident, some of which reveal the internal dynamics of households.

Its defenders note that CDR have other important responsibilities beyond their function to monitor the individual's political and moral background; these include arranging festivals, administrating many voluntary community projects, and organizing mass rallies. Proponents also emphasize that CDR put medical, educational, or other campaigns into national effect and that, being organized on a geographical basis, they also act as centers for many who do not work in farms or factories and hence include a large proportion of female membership. The CDR's also take a role an active role in vaccination campaigns, blood banks, recycling, practicing evacuations for hurricanes, and backing up the government in its fight against corruption.

However, a 2006 Amnesty International
Amnesty International
Amnesty International is an international non-governmental organisation whose stated mission is "to conduct research and generate action to prevent and end grave abuses of human rights, and to demand justice for those whose rights have been violated."Following a publication of Peter Benenson's...
report noted CDR involvement in repeated human rights violations that included verbal as well as physical violence. Critics also contend that the CDR's are a repressive tool, giving the government a heads-up on dissident activities on the micro-local level, sometimes tattling on the non-compliant. and name CDR's
as "one of the lead entities responsible for the wave of repression sweeping through Cuba" including a brutal beating of nearly 50 Ladies in White
Ladies in White
Ladies in White is an opposition movement in Cuba consisting of wives and other female relatives of jailed dissidents. The women protest the imprisonments by attending Mass each Sunday wearing white dresses and then silently walking through the streets dressed in white clothing...
in Havana in August 2011.

Elizardo Sanchez
Elizardo Sanchez
Elizardo Sanchez Santa-Cruz is a Cuban human rights campaigner and founder of the Cuban Human Rights and National Reconciliation Commission, a group supporting change in Cuba....
, a Cuban dissident
Dissident
A dissident, broadly defined, is a person who actively challenges an established doctrine, policy, or institution. When dissidents unite for a common cause they often effect a dissident movement....
, described the CDR as "a tool for the systematic and mass violation of human rights, for ideological and repressive discrimination. They assist the police and the secret service." Whereas Lazaro Sanchez, a CDR supporter, says of the CDR that, "The (U.S.) Enemy as well as Cuban sellouts take advantage of confusion to sow doubts. If we have to act, we are going to act. Our streets cannot belong to criminals, or to counterrevolutionaries. The U.S. Empire has the FBI
Federal Bureau of Investigation
The Federal Bureau of Investigation is an agency of the United States Department of Justice that serves as both a federal criminal investigative body and an internal intelligence agency . The FBI has investigative jurisdiction over violations of more than 200 categories of federal crime...
; the Revolution has its CDRs."
The source of this article is wikipedia, the free encyclopedia.  The text of this article is licensed under the GFDL.