Encyclopedia
The Columbus Metropolitan Library (CML), located in the capital city of Ohio, opened its doors in 1873 in the New City Hall in downtown Columbus. This library is one of the most-used library systems in the country and is consistently among the top-ranked large city libraries according to "Hennen’s American Public Library Ratings." Led by Larry D. Black from 1984 to 2002, the redeveloped CML was formally reopened in 1991 by U.S. First Lady Barbara Bush. Excellent customer service was Black's continual objective. CML was rated the No. 1 library system in the nation in 1999, 2005, 2008, and 2010. It has been in the top four every year since 1999 when the rankings were first published in American Libraries magazine, often challenging up-state neighbor Cuyahoga County Public Library
Cuyahoga County Public Library
Cuyahoga County Public Library has 28 branches that serve 47 communities in Cuyahoga County, Ohio. It was ranked the number one public library in the United States among libraries serving populations of more than 500,000 by the Hennen's American Public Library Ratings 2010...
for the top spot.

CML was named Library of the Year by the Library Journal
Library Journal
Library Journal is a trade publication for librarians. It was founded in 1876 by Melvil Dewey . It reports news about the library world, emphasizing public libraries, and offers feature articles about aspects of professional practice...
in 2010.
According to the National Center for Education Statistics
National Center for Education Statistics
The National Center for Education Statistics is the part of the United States Department of Education's Institute of Education Sciences that collects, analyzes, and publishes statistics on education and public school district finance information in the United States...
, in fiscal year 2005 CML patrons borrowed more than 16.5 million
Million
One million or one thousand thousand, is the natural number following 999,999 and preceding 1,000,001. The word is derived from the early Italian millione , from mille, "thousand", plus the augmentative suffix -one.In scientific notation, it is written as or just 106...
items, made 8.4 million visits to the library and asked nearly 1.2 million reference questions.

The library serves an area of more than 870,000 residents and has a collection of 2,500,000 books and periodicals. In addition, there are 260,000 CDs, records, cassettes, and other audio materials, as well as 176,000 video items, such as DVDs and VHS tapes. In 2006, the library was ranked by Hennen's American Public Library Rating Index as #3 for libraries serving populations of 500,000 or greater. The library is state funded and strongly supported by the citizens of Franklin County which has been shown by their repeated passing of a 2.2-mill
Mill (currency)
The mill or mille is a now-abstract unit of currency used sometimes in accounting. In the United States, it is a notional unit equivalent to of a United States dollar...
property levy which has been in place since 1986. This levy was approved again in 2010 at the increased rate of 2.8-mill, the additional 0.6 mill being needed to replace lost state funding.

Staffing at CML consists of 794 employees, of whom 154 are fully accredited librarians, plus volunteers. The system has 2 bookmobiles. The annual expenditures for the library collection totals $8,000,000. It was found that thirty-five percent of all check-outs are children's materials. In 2005 CML had 8.4 million visits and loaned out 16.5 million items. 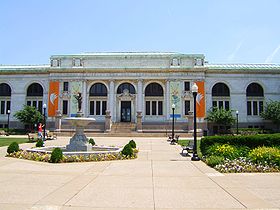 The CML mission is "to promote reading and guide learning in the pursuit of information, knowledge, and wisdom." This mission is accomplished through the number of services and classes offered by CML. CML provides help for adults with GED classes, technology training for basic computer knowledge, adult basic learning classes, introduction to Microsoft word and learn to surf a basic internet classes. The library understands that today's children are their future. To keep the youths coming back to the library, they provide homework help centers at all 21 CML locations. These are also accessible online. There is also help for children who are home schooled. They also have several teen gaming nights, book groups and a Manga & Anime club. Due to the growing population of Hispanics and Somalians, the library has an extensive ESL program at several branch libraries. There is also Spanish reading time and technology classes taught in Spanish.

CML has several Outreach Services programs. The bookmobile program, started in 1951, reaches kids and adults who can't get to the library in their neighborhoods. This program also goes to daycares and to Columbus Public Schools that are located in "at risk" areas. The Ready to Read program goes to daycares and reaches 1,200 low-income parents a year. The Lobby Stop program is for senior citizens in retirement apartments. It utilizes a specially designed truck to transport book carts with large print books, DVDs and other materials and set up a temporary library in the common areas. The Book by mail program which started in 1977 is for the homebound. Large print books and other materials are mailed monthly or bi-monthly through the US postal system.

CML first offered its patrons a public computer in 1977 and internet access in 1997. CML now has computers at all library locations and some have laptops for loan. CML is WiFi enabled. CML was rated 3 times as #1 by Hennen's because it continues to put patrons first and continues to stay current on technological advances. In 2004 CML started the program "Know-It-Now", a 24/7 virtual reference service. The "Proactive Reference" approach is another way the library is geared towards maximizing patrons' satisfaction; this approach ends the passivity of the reference librarians by taking the chair away and having the librarians interact with patrons throughout the library.