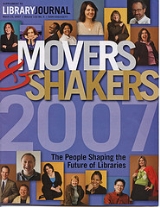 Encyclopedia
Library Journal is a trade publication for librarian
Librarian
A librarian is an information professional trained in library and information science, which is the organization and management of information services or materials for those with information needs...
s. It was founded in 1876 by Melvil Dewey
Melvil Dewey
Melville Louis Kossuth Dewey was an American librarian and educator, inventor of the Dewey Decimal system of library classification, and a founder of the Lake Placid Club....
(familiar as the inventor of the Dewey decimal system
Dewey Decimal Classification
Dewey Decimal Classification, is a proprietary system of library classification developed by Melvil Dewey in 1876.It has been greatly modified and expanded through 23 major revisions, the most recent in 2011...
). It reports news about the library world, emphasizing public libraries, and offers feature articles about aspects of professional practice. It also reviews library-related materials and equipment.

Library Journal has the highest circulation of any librarianship journal, according to Ulrich's — approximately 100,000.

Library Journal's original publisher was Frederick Leypoldt
Frederick Leypoldt
Frederick Leypoldt was a bibliographer, the founder of an ancestor company of Library Journal, Publisher's Weekly, Index Medicus and other publications.-Biography:...
, whose company became R. R. Bowker
R. R. Bowker
R.R. Bowker, LLC provides information support for the publishing industry in the United States. Bowker is the official U.S. ISBN Agency, the publisher of Books In Print and other compilations of information about book and periodical titles, and a provider of book industry supply chain services and...
. Reed International (now Reed Business Information
Reed Business Information
Reed Business Information is a large business publisher in the United States, United Kingdom, continental Europe, Australia and Asia, often referred to as RBI...
) purchased Bowker in 1985; they published Library Journal until 2010, when it was sold to Media Source, owner of the Junior Library Guild and The Horn Book Magazine.

Founded in 1876 by Melvil Dewey
Melvil Dewey
Melville Louis Kossuth Dewey was an American librarian and educator, inventor of the Dewey Decimal system of library classification, and a founder of the Lake Placid Club....
, Library Journal originally declared itself to be the "official organ of the library associations of America and of the United Kingdom." Its early issues focused on the growth and development of libraries, with feature articles by such prominent authors as Melvil Dewey and Charles Cutter focusing on cataloging, indexing, and lending schemes. In its early issues, Charles Cutter, creator of the Cutter Expansive Classification
Cutter Expansive Classification
The Cutter Expansive Classification system is a library classification system devised by Charles Ammi Cutter. The system was the basis for the top categories of the Library of Congress Classification.-History of the Expansive Classification:...
system, developed his ideas; R. R. Bowker
R. R. Bowker
R.R. Bowker, LLC provides information support for the publishing industry in the United States. Bowker is the official U.S. ISBN Agency, the publisher of Books In Print and other compilations of information about book and periodical titles, and a provider of book industry supply chain services and...
discussed cataloging principles; and managing editor Melvil Dewey made recommendations for early library circulation systems. Initially, Library Journal did not review books unless they related to librarians' professional interests, but then, like now, the journal ran articles on collection development and ads from publishers recommending their forthcoming books for libraries to purchase.

Early issues of Library Journal were a forum for librarians throughout the U.S., Canada, and the United Kingdom to share news, discussions of their libraries' ideas and practices, and reports of professional activities such as meetings and conferences. In an 1878 prospectus, the journal stressed its importance by noting that small libraries, in particular, could gain the "costly experience and practical advice" of the largest libraries. Regular reading of Library Journal, the prospectus declared, would make "the librarian worth more to the library, and the library worth more to the people." In the Notes and Queries section, librarians shared reports of how their library managed common problems, and they maintained a constant exchange of questions and answers about authorship and reader's advisory. Two prominent sections, the Bibliography (complied by Charles Cutter) and Pseudonyms and Anonyms (James L. Whitney), served as reference resources for librarians. The latter contained an ongoing list of titles of untitled works and real names of authors who were anonymous or used pseudonyms, with an index compiling all of them in the December issue.

The print edition of Library Journal contains the following sections:

LibraryJournal.com, the website of Library Journal, provides full access to all print content, as well as recent archives, to both subscribers and non-subscribers. Visitors can sign up for email newsletters such as BookSmack, Library Hotline, LJ Academic Newswire, LJ Review Alert, and LJXpress. Web articles in the Libraries & Librarians category are listed by topic, with each topic assigned its own RSS feed so that users can receive articles relevant to their interests. Past and present reviews are archived and organized by type (book, magazine, video/DVD, gaming, etc.) and are also available in RSS feeds.