Encyclopedia
Colton is a city in San Bernardino County
San Bernardino County, California
San Bernardino County is a county in the U.S. state of California. As of the 2010 census, the population was 2,035,210, up from 1,709,434 as of the 2000 census...
, California
California
California is a state located on the West Coast of the United States. It is by far the most populous U.S. state, and the third-largest by land area...
, United States
United States
The United States of America is a federal constitutional republic comprising fifty states and a federal district...
. The city is located in the Inland Empire
Inland Empire (California)
The Inland Empire is a region in Southern California. The region sits directly east of the Los Angeles metropolitan area. The Inland Empire most commonly is used in reference to the U.S. Census Bureau's federally-defined Riverside-San Bernardino-Ontario metropolitan area, which covers more than...
region of the state and is approximately 57 miles east of Los Angeles
Los Ángeles
Los Ángeles is the capital of the province of Biobío, in the commune of the same name, in Region VIII , in the center-south of Chile. It is located between the Laja and Biobío rivers. The population is 123,445 inhabitants...
. The population of Colton is 52,154 according to the 2010 census, up from 47,662 at the 2000 census.

Colton is the site of Colton Crossing
Colton Crossing
The Colton Crossing is an "at grade" Railway Crossing situated in Colton, California, directly south of the Interstate 10 freeway. First built in 1883, it was the site of one of the most intense Frog wars in railroad construction history leading to a personal confrontation between famed lawman...
, one of the busiest at-grade railroad crossings in the United States. The main transcontinental
Transcontinental railroad
A transcontinental railroad is a contiguous network of railroad trackage that crosses a continental land mass with terminals at different oceans or continental borders. Such networks can be via the tracks of either a single railroad, or over those owned or controlled by multiple railway companies...
trunk lines of Union Pacific and Burlington Northern Santa Fe cross at this point. As traffic on each line has soared since the mid-1990s, fueled largely by the vast increase in imports passing through the ports of Los Angeles
Port of Los Angeles
The Port of Los Angeles, also called Los Angeles Harbor and WORLDPORT L.A, is a port complex that occupies of land and water along of waterfront. The port is located on San Pedro Bay in the San Pedro neighborhood of Los Angeles, approximately south of downtown...
and Long Beach
Port of Long Beach
The Port of Long Beach, also known as Long Beach’s Harbor Department, is the 2nd busiest container port in the USA. It adjoins the separate Port of Los Angeles. Acting as a major gateway for U.S.-Asian trade, the port occupies of land with of waterfront in the city of Long Beach, California...
, the primitive crossing has become a serious bottleneck. The crossing was installed in August 1882 by the California Southern Railroad
California Southern Railroad
The California Southern Railroad was a subsidiary railroad of the Atchison, Topeka and Santa Fe Railway in Southern California. It was organized July 10, 1880, and chartered on October 23, 1880, to build a rail connection between what has become the city of Barstow and San Diego,...
to cross the Southern Pacific Railroad
Southern Pacific Railroad
The Southern Pacific Transportation Company , earlier Southern Pacific Railroad and Southern Pacific Company, and usually simply called the Southern Pacific or Espee, was an American railroad....
's tracks while building northward from San Diego
San Diego, California
San Diego is the eighth-largest city in the United States and second-largest city in California. The city is located on the coast of the Pacific Ocean in Southern California, immediately adjacent to the Mexican border. The birthplace of California, San Diego is known for its mild year-round...
.

There were 14,971 households, out of which 7,826 (52.3%) had children under the age of 18 living in them, 7,167 (47.9%) were opposite-sex married couples
Marriage
Marriage is a social union or legal contract between people that creates kinship. It is an institution in which interpersonal relationships, usually intimate and sexual, are acknowledged in a variety of ways, depending on the culture or subculture in which it is found...
living together, 3,233 (21.6%) had a female householder with no husband present, 1,340 (9.0%) had a male householder with no wife present. There were 1,268 (8.5%) unmarried opposite-sex partnerships
POSSLQ
POSSLQ is an abbreviation for "Persons of Opposite Sex Sharing Living Quarters," a term coined in the late 1970s by the United States Census Bureau as part of an effort to more accurately gauge the prevalence of cohabitation in American households....
, and 106 (0.7%) same-sex married couples or partnerships. 2,452 households (16.4%) were made up of individuals and 614 (4.1%) had someone living alone who was 65 years of age or older. The average household size was 3.46. There were 11,740 families
Family (U.S. Census)
A family or family household is defined by the United States Census Bureau for statistical purposes as "a householder and one or more other people related to the householder by birth, marriage, or adoption. They do not include same-sex married couples even if the marriage was performed in a state...
(78.4% of all households); the average family size was 3.86.

As of the census
Census
A census is the procedure of systematically acquiring and recording information about the members of a given population. It is a regularly occurring and official count of a particular population. The term is used mostly in connection with national population and housing censuses; other common...
of 2000, there were 47,690 people, 14,520 households, and 10,904 families residing in the city. The population density
Population density
Population density is a measurement of population per unit area or unit volume. It is frequently applied to living organisms, and particularly to humans...
was 3,154.3 inhabitants per square mile (1,217.9/km²). There were 15,680 housing units at an average density of 1,037.7 per square mile (400.7/km²). The racial makeup of the city was 42.7% White, 11.0% African American, 1.3% Native American, 5.3% Asian, 0.2% Pacific Islander, 34.5% from other races
Race (United States Census)
Race and ethnicity in the United States Census, as defined by the Federal Office of Management and Budget and the United States Census Bureau, are self-identification data items in which residents choose the race or races with which they most closely identify, and indicate whether or not they are...
, and 5.1% from two or more races. Hispanic or Latino of any race were 60.7% of the population.

There were 14,520 households out of which 46.5% had children under the age of 18 living with them, 48.3% were married couples
Marriage
Marriage is a social union or legal contract between people that creates kinship. It is an institution in which interpersonal relationships, usually intimate and sexual, are acknowledged in a variety of ways, depending on the culture or subculture in which it is found...
living together, 19.5% had a female householder with no husband present, and 24.9% were non-families. 19.4% of all households were made up of individuals and 4.6% had someone living alone who was 65 years of age or older. The average household size was 3.3 and the average family size was 3.8.

The median income for a household in the city was $35,777, and the median income for a family was $37,911. Males had a median income of $32,152 versus $25,118 for females. The per capita income
Per capita income
Per capita income or income per person is a measure of mean income within an economic aggregate, such as a country or city. It is calculated by taking a measure of all sources of income in the aggregate and dividing it by the total population...
for the city was $13,460. About 18.2% of families and 19.6% of the population were below the poverty line, including 25.2% of those under age 18 and 10.9% of those age 65 or over. 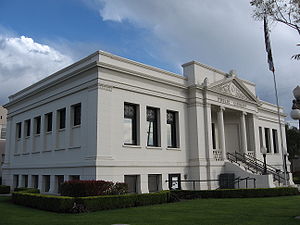 Virgil Earp
Virgil Earp
Virgil Walter Earp fought in the Civil War. He was U.S. Deputy Marshal for south-eastern Arizona and Tombstone City Marshal at the time of the Gunfight at the O.K. Corral in the Arizona Territory. Two months after the shootout in Tombstone, outlaw Cowboys ambushed Virgil on the streets of...
lived in Colton at 528 W. "H" Street where he was the town's first Marshall. He resided in Colton from 1883 to 1889. Morgan Earp
Morgan Earp
Morgan Seth Earp was the younger brother of Deputy U.S. Marshals Virgil and Wyatt Earp. Morgan was a deputy of Virgil's and all three men were the target of repeated death threats made by outlaw Cowboys who were upset by the Earps' interference in their illegal activities. This conflict eventually...
is buried at Hermosa Cemetery

According to the City's 2010 Comprehensive Annual Financial Report, the top employers in the city are: