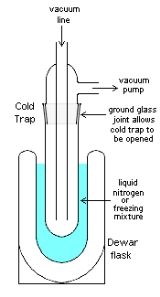 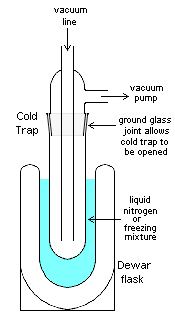 In vacuum
Vacuum
In everyday usage, vacuum is a volume of space that is essentially empty of matter, such that its gaseous pressure is much less than atmospheric pressure. The word comes from the Latin term for "empty". A perfect vacuum would be one with no particles in it at all, which is impossible to achieve in...
applications, a cold trap is a device that condenses all vapor
Vapor
A vapor or vapour is a substance in the gas phase at a temperature lower than its critical point....
s except the permanent gases into a liquid or solid. The most common objective is to prevent vapors from a vacuum pump
Vacuum pump
A vacuum pump is a device that removes gas molecules from a sealed volume in order to leave behind a partial vacuum. The first vacuum pump was invented in 1650 by Otto von Guericke.- Types :Pumps can be broadly categorized according to three techniques:...
from contaminating the experiment or sample of interest. Cold traps also refer to the application of cooled surfaces or baffles to prevent oil vapours from flowing from a pump and into a chamber. In such a case, a baffle or a section of pipe containing a number of cooled vanes, will be attached to the inlet of an existing pumping system. By cooling the baffle, either with a cryogen such as liquid nitrogen, or by use of an electrically driven Peltier element, oil vapour molecules that strike the baffle vanes will condense and thus be removed from the pumped cavity.

Pumps that use oil either as their working fluid (diffusion pump
Diffusion pump
Diffusion pumps use a high speed jet of vapor to direct gas molecules in the pump throat down into the bottom of the pump and out the exhaust. Presented in 1915 by Wolfgang Gaede and using mercury vapor, they were the first type of high vacuum pumps operating in the regime of free molecular flow,...
s), or as their lubricant (mechanical rotary pumps), are often the sources of contamination in vacuum systems. Placing a cold trap at the mouth of such a pump greatly lowers the risk that oil vapours will backstream into the cavity.

Cold traps can also be used for experiments involving vacuum lines such as small-scale very low temperature distillation
Distillation
Distillation is a method of separating mixtures based on differences in volatilities of components in a boiling liquid mixture. Distillation is a unit operation, or a physical separation process, and not a chemical reaction....
s/condensation
Condensation
Condensation is the change of the physical state of matter from gaseous phase into liquid phase, and is the reverse of vaporization. When the transition happens from the gaseous phase into the solid phase directly, the change is called deposition....
s. This is accomplished through the use of a coolant such as liquid nitrogen
Liquid nitrogen
Liquid nitrogen is nitrogen in a liquid state at a very low temperature. It is produced industrially by fractional distillation of liquid air. Liquid nitrogen is a colourless clear liquid with density of 0.807 g/mL at its boiling point and a dielectric constant of 1.4...
or a freezing mixture of dry ice
Dry ice
Dry ice, sometimes referred to as "Cardice" or as "card ice" , is the solid form of carbon dioxide. It is used primarily as a cooling agent. Its advantages include lower temperature than that of water ice and not leaving any residue...
in acetone
Acetone
Acetone is the organic compound with the formula 2CO, a colorless, mobile, flammable liquid, the simplest example of the ketones.Acetone is miscible with water and serves as an important solvent in its own right, typically as the solvent of choice for cleaning purposes in the laboratory...
or a similar solvent with a low melting point
Melting point
The melting point of a solid is the temperature at which it changes state from solid to liquid. At the melting point the solid and liquid phase exist in equilibrium. The melting point of a substance depends on pressure and is usually specified at standard atmospheric pressure...
.

Cold traps are also used in cryopump
Cryopump
A cryopump is a vacuum pump that traps gases and vapours by condensing them on a cold surface. They are only effective on some gases, depending on the freezing and boiling points of the gas relative to the cryopump's temperature...
systems to generate hard vacua by condensing the major constituents of the atmosphere (nitrogen
Nitrogen
Nitrogen is a chemical element that has the symbol N, atomic number of 7 and atomic mass 14.00674 u. Elemental nitrogen is a colorless, odorless, tasteless, and mostly inert diatomic gas at standard conditions, constituting 78.08% by volume of Earth's atmosphere...
, oxygen
Oxygen
Oxygen is the element with atomic number 8 and represented by the symbol O. Its name derives from the Greek roots ὀξύς and -γενής , because at the time of naming, it was mistakenly thought that all acids required oxygen in their composition...
, carbon dioxide
Carbon dioxide
Carbon dioxide is a naturally occurring chemical compound composed of two oxygen atoms covalently bonded to a single carbon atom...
and water
Water
Water is a chemical substance with the chemical formula H2O. A water molecule contains one oxygen and two hydrogen atoms connected by covalent bonds. Water is a liquid at ambient conditions, but it often co-exists on Earth with its solid state, ice, and gaseous state . Water also exists in a...
) into their liquid or solid forms.