Encyclopedia
Coin counterfeiting of valuable antique coin
Coin
A coin is a piece of hard material that is standardized in weight, is produced in large quantities in order to facilitate trade, and primarily can be used as a legal tender token for commerce in the designated country, region, or territory....
s is common; modern high-value coins are also counterfeited and circulated.
Counterfeit antique coins are generally made to a very high standard so that they can deceive experts; this is not easy and many coins still stand out. 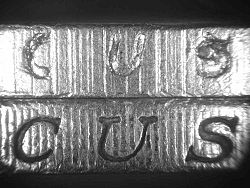 Counterfeits of higher-value coins in circulation, designed for general circulation at face value, have been made by criminals for hundreds of years. For modern coins in general circulation the most common method of protection from forgeries is the use of bi-metallic coins
Bi-metallic coins
Bi-metallic coins are coins consisting of more than one metal or alloy, generally arranged with an outer ring around a contrasting center. Common circulating examples include the €1, €2, British £2, Canadian $2, South African R5, Turkish 1 lira, and all Mexican coins of $1 or higher...
, made of two metal
Metal
A metal , is an element, compound, or alloy that is a good conductor of both electricity and heat. Metals are usually malleable and shiny, that is they reflect most of incident light...
s of different colour, which are difficult to counterfeit at low cost. The most common way of forging these coins is to change the area that should be a different colour by painting it, however the paint is often easy to scratch off and the coins soon look very crude once worn. An increasing number of coins are cast from the same composition alloy as the real coin, but have poor reproduction of details such as the milling on the side of the coin and the stamped lettering.
When the euro
Euro
The euro is the official currency of the eurozone: 17 of the 27 member states of the European Union. It is also the currency used by the Institutions of the European Union. The eurozone consists of Austria, Belgium, Cyprus, Estonia, Finland, France, Germany, Greece, Ireland, Italy, Luxembourg,...
was introduced into Europe
Europe
Europe is, by convention, one of the world's seven continents. Comprising the westernmost peninsula of Eurasia, Europe is generally 'divided' from Asia to its east by the watershed divides of the Ural and Caucasus Mountains, the Ural River, the Caspian and Black Seas, and the waterways connecting...
there were initially very few counterfeits, however the number increased massively as time went by. The high and increasing number of fake euro coins in circulation in 2004 led to the creation of a Technical and Scientific Center for the coordination of technical actions to protect euro coins against counterfeiting. In all it is estimated that in Europe 1.7% of all pound
Pound (currency)
The pound is a unit of currency in some nations. The term originated in England as the value of a pound of silver.The word pound is the English translation of the Latin word libra, which was the unit of account of the Roman Empire...
coins and 373,719 euro coins (of differing denominations) in circulation are counterfeit.

Among the examples of counterfeits of high-value collectible coins are the "Omega" coins produced in the early 1970s by an unknown counterfeiter who signed his creations with a minute Greek
Greek alphabet
The Greek alphabet is the script that has been used to write the Greek language since at least 730 BC . The alphabet in its classical and modern form consists of 24 letters ordered in sequence from alpha to omega...
letter omega
Omega
Omega is the 24th and last letter of the Greek alphabet. In the Greek numeric system, it has a value of 800. The word literally means "great O" , as opposed to omicron, which means "little O"...
. He is believed to have made over 20,000 fake 1907 high-relief nominally US$20 gold Double Eagle
Double Eagle
A Double Eagle is a gold coin of the United States with a denomination of $20. . The coins are made from a 90% gold and 10% copper alloy....
coins with the signature omega in the claw of the eagle, worth hundreds of millions of dollars at today's prices. His counterfeits are of such high quality that collectors will pay upwards of $1,000 for one; although a genuine coin sells for about $50,000 to $100,000. The same counterfeiter also counterfeited other US gold coins, including a large quantity of $3 gold pieces, dated 1874, 1878 and 1882, with the 1882 being the most prevalent. Two of the counterfeit $10 gold pieces, the 1913-P and 1926-P, have the omega placed upside down within the upper loop of the "R" of "LIBERTY" in the Indian's headdress.