Codex on the Flight of Birds
Topic Home
Discussion
0
Definition 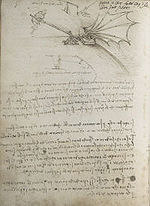 Codex on the Flight of Birds is a relatively short codex
Codex
A codex is a book in the format used for modern books, with multiple quires or gatherings typically bound together and given a cover.Developed by the Romans from wooden writing tablets, its gradual replacement...
of circa 1505 by Leonardo da Vinci
Leonardo da Vinci
Leonardo di ser Piero da Vinci was an Italian Renaissance polymath: painter, sculptor, architect, musician, scientist, mathematician, engineer, inventor, anatomist, geologist, cartographer, botanist and writer whose genius, perhaps more than that of any other figure, epitomized the Renaissance...
. It comprises 18 folios and measures 21 × 15 centimetres. Now held at the Biblioteca Reale in Turin
Turin
Turin is a city and major business and cultural centre in northern Italy, capital of the Piedmont region, located mainly on the left bank of the Po River and surrounded by the Alpine arch. The population of the city proper is 909,193 while the population of the urban area is estimated by Eurostat...
, Italy, the codex begins with an examination of the flight
Bird flight
Flight is the main mode of locomotion used by most of the world's bird species. Flight assists birds while feeding, breeding and avoiding predators....
behavior of bird
Bird
Birds are feathered, winged, bipedal, endothermic , egg-laying, vertebrate animals. Around 10,000 living species and 188 families makes them the most speciose class of tetrapod vertebrates. They inhabit ecosystems across the globe, from the Arctic to the Antarctic. Extant birds range in size from...
s and proposes mechanisms for flight by machines. Da Vinci constructed a number of these machines, and attempted to launch them from a hill near Florence
Florence
Florence is the capital city of the Italian region of Tuscany and of the province of Florence. It is the most populous city in Tuscany, with approximately 370,000 inhabitants, expanding to over 1.5 million in the metropolitan area....
. However, his efforts failed.