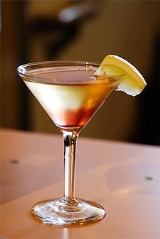 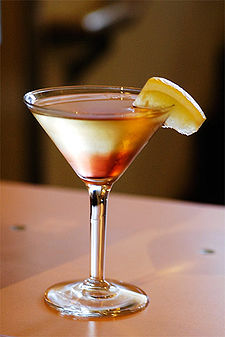 Cocktails were originally a mixture of spirits, sugar, water, and bitters
Bitters
A bitters is an alcoholic beverage that is flavored with herbal essences and has a bitter or bittersweet flavor. There are numerous brands of bitters that were formerly marketed as patent medicines but are now considered to be digestifs, rather than medicines...
. The word has come to mean almost any mixed drink that contains alcohol. A cocktail today usually contains one or more kinds of spirit and one or more mixers, such as soda
Carbonated water
Carbonated water is water into which carbon dioxide gas under pressure has been dissolved, a process that causes the water to become effervescent....
or fruit juice. Additional ingredients may be sugar
Sugar
Sugar is a class of edible crystalline carbohydrates, mainly sucrose, lactose, and fructose, characterized by a sweet flavor.Sucrose in its refined form primarily comes from sugar cane and sugar beet...
, honey
Honey
Honey is a sweet food made by bees using nectar from flowers. The variety produced by honey bees is the one most commonly referred to and is the type of honey collected by beekeepers and consumed by humans...
, milk
Milk
Milk is a white liquid produced by the mammary glands of mammals. It is the primary source of nutrition for young mammals before they are able to digest other types of food. Early-lactation milk contains colostrum, which carries the mother's antibodies to the baby and can reduce the risk of many...
, cream
Cream
Cream is a dairy product that is composed of the higher-butterfat layer skimmed from the top of milk before homogenization. In un-homogenized milk, over time, the lighter fat rises to the top. In the industrial production of cream this process is accelerated by using centrifuges called "separators"...
, and various herbs.

The origin of the word cocktail is not known.

The earliest known printed use of cocktail is said to be in The Farmer's Cabinet on April 28, 1803:
The earliest definition of cocktail was in the May 13, 1806, edition of The Balance and Columbian Repository, a publication in Hudson, New York
Hudson, New York
Hudson is a city located along the west border of Columbia County, New York, United States. The city is named after the adjacent Hudson River and ultimately after the explorer Henry Hudson.Hudson is the county seat of Columbia County...
, in which an answer was provided to the question, "What is a cocktail?". It replied: 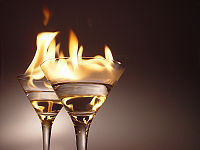 Compare the ingredients listed (spirits, sugar, water, and bitters) with the ingredients of an Old Fashioned
Old Fashioned
The Old Fashioned is a type of cocktail made by muddling dissolved sugar with bitters then adding alcohol, such as jenever, whiskey, or brandy, and a twist of citrus rind. The name references the combination's age: it is possibly the first drink to be called a cocktail...
, which originated as a term used by late 19th century bar patrons to distinguish cocktails made the “old-fashioned” way from newer, more complex cocktails.

The first publication of a bartender
Bartender
A bartender is a person who serves beverages behind a counter in a bar, pub, tavern, or similar establishment. A bartender, in short, "tends the bar". The term barkeeper may carry a connotation of being the bar's owner...
s' guide which included cocktail recipes was in 1862 — How to Mix Drinks; or, The Bon Vivant's Companion, by "Professor" Jerry Thomas. In addition to listings of recipes for Punches, Sours, Slings, Cobblers, Shrubs, Toddies, Flips, and a variety of other types of mixed drinks were 10 recipes for drinks referred to as "Cocktails". A key ingredient which differentiated "cocktails" from other drinks in this compendium was the use of bitters
Bitters
A bitters is an alcoholic beverage that is flavored with herbal essences and has a bitter or bittersweet flavor. There are numerous brands of bitters that were formerly marketed as patent medicines but are now considered to be digestifs, rather than medicines...
as an ingredient, although it is not used in many modern cocktail recipes.

The first "cocktail party" ever thrown was allegedly by Mrs. Julius S. Walsh Jr. of St. Louis, Missouri
Missouri
Missouri is a US state located in the Midwestern United States, bordered by Iowa, Illinois, Kentucky, Tennessee, Arkansas, Oklahoma, Kansas and Nebraska. With a 2010 population of 5,988,927, Missouri is the 18th most populous state in the nation and the fifth most populous in the Midwest. It...
, in May 1917. Mrs. Walsh invited 50 guests to her home at noon on a Sunday. The party lasted an hour, until lunch was served at 1 pm. The site of this first cocktail party still stands. In 1924, the Roman Catholic Archdiocese of St. Louis bought the Walsh mansion at 4510 Lindell Boulevard, and it has served as the local archbishop's residence ever since.

During Prohibition in the United States
Prohibition in the United States
Prohibition in the United States was a national ban on the sale, manufacture, and transportation of alcohol, in place from 1920 to 1933. The ban was mandated by the Eighteenth Amendment to the Constitution, and the Volstead Act set down the rules for enforcing the ban, as well as defining which...
(1920–1933), when alcoholic beverages were illegal, cocktails were still consumed illegally in establishments known as speakeasies
Speakeasy
A speakeasy, also called a blind pig or blind tiger, is an establishment that illegally sells alcoholic beverages. Such establishments came into prominence in the United States during the period known as Prohibition...
. The quality of liquor available during Prohibition was much worse than previously. There was a shift from whiskey to gin
Gin
Gin is a spirit which derives its predominant flavour from juniper berries . Although several different styles of gin have existed since its origins, it is broadly differentiated into two basic legal categories...
, which does not require aging and is therefore easier to produce illicitly.

Cocktails became less popular in the late 1960s and in the 1970s, as other recreational drugs
Recreational drug use
Recreational drug use is the use of a drug, usually psychoactive, with the intention of creating or enhancing recreational experience. Such use is controversial, however, often being considered to be also drug abuse, and it is often illegal...
became common. In the 1980s, cocktails again became popular, with vodka
Vodka
Vodka , is a distilled beverage. It is composed primarily of water and ethanol with traces of impurities and flavorings. Vodka is made by the distillation of fermented substances such as grains, potatoes, or sometimes fruits....
often substituted for gin in drinks such as the martini
Martini (cocktail)
The martini is a cocktail made with gin and vermouth, and garnished with an olive or a lemon twist. Over the years, the martini has become one of the best-known mixed alcoholic beverages. H. L. Mencken called the martini "the only American invention as perfect as the sonnet" and E. B...
. Traditional cocktails and gin began to make a comeback in the 2000s. 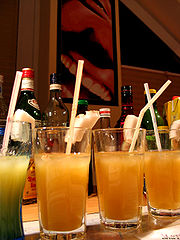 The word cocktail is sometimes used figuratively for a mixture of liquids or other substances. Such a use might be, for example: "120 years of industry have dosed the area's soil with a noxious cocktail of heavy metals and chemical contaminants."

A makeshift incendiary bomb consisting of a bottle of flammable liquid (usually gasoline) with a flaming rag attached is known as a "Molotov cocktail
Molotov cocktail
The Molotov cocktail, also known as the petrol bomb, gasoline bomb, Molotov bomb, fire bottle, fire bomb, or simply Molotov, is a generic name used for a variety of improvised incendiary weapons...
".